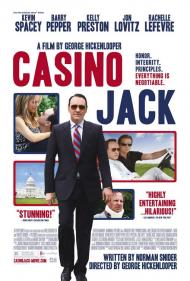 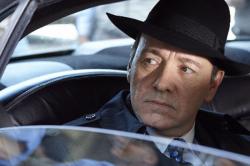 This movie shows once again that Kevin Spacey is one of the most talented actors working today.  While as a whole the movie is only okay, his performance is top notch.  His role, a scene-stealing Jon Lovitz and some of the lighter moments are the best parts of a movie that will appeal more to political junkies such as my brother Eric than to those with less of an interest in politics such as myself. Not being an expert on Abramoff, I have no idea how much of the script is true and how much is conjecture.

Spacey plays Jack Abramoff the real-life super-lobbyist of Washington D.C. in the mid-noughties.  It charts his success and downfall.  He was the man with the ear of everyone in politics from the President on down.  Using his powers of persuasion he was able to make deals of varying degrees of legality with almost everyone he came into contact with.  An ego-maniac, he spent money lavishly on grandiose plans, living beyond his means despite making millions of dollars.  Not surprisingly it is his own greed that brings him down.  That's not a spoiler, since A, this is a true story and B, the movie starts with his downfall and flashes back to tell his story.

Part of the problem with this movie is that I never really felt I understood Abramoff.  Spacey does a good job of showing you what manner of person he is, but I don't know why he was the way he was.  What drove him to be the person that he became?  Why is he so insecure that he has to constantly tell people what he's accomplished, like his continued refrain that, "I work out every day!".   I didn't want his full biography, but a small amount of background would have been nice.

One of the more entertaining subplots involves a fleet of casino ships that Abramoff tries to buy.  He puts Adam Kidan (Lovitz), an acquaintance of his, in charge of operating them.  Kidan is a hapless former mattress salesman with mob connections.  He provides some of the movie's funniest moments as he wallows in drugs, alcohol and women and eventually gets the shit kicked out of him by a pen-wielding Greek mobster.

Although this movie shows that Abramoff is a corrupt dealmaker, it really points out that he was just the flashiest of the bunch and that he was simply doing the same thing that a lot of other lobbyists were and are doing.  Unlike the rest of them, Abramoff just didn't know when to play it cool and lie low.  In a fantasy scene that only takes place in his head at the senate hearings, he goes off on a rant about the system and points to each of the senators on the committee and explains how each of them has received money from some pressure group or another.

Clearly Abramoff is an interesting character and Spacey does a good job embodying him.  While I was entertained by him, I was still left with questions.  I hate using food metaphors to describe movies since it's such a tired review cliche, but Casino Jack really is like a meal that tastes good but doesn't leave you feeling satisfied after you're done eating it. 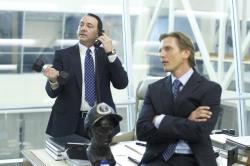 Casino Jack lacks a good narrative or story arc. Lets be honest though, it was not made because it makes a good movie, it was made entirely for political reasons.  As a religious right wing capitalist, Jack Abramoff is the perfect person for liberal Hollywood to showcase as a criminal.  However, it makes a better news story than a movie.

On January 3, 2006, Abramoff pleaded guilty to conspiracy, fraud, and tax evasion.  The charges were mostly from his lobbying activities in Washington for Native American tribes and corruption of public officials.  On September 4, 2008, he was found guilty of exchanging gifts, meals and trips for political favors.  He brought many notable Republicans down with him in the process.  He was sentenced to six years in federal prison and ended up serving four years before being released on December 3, 2010.  Just in time for this film's premiere.

As Scott wrote, what Jack did is hardly unique.   There are lobbyist supporting both sides of the aisle who have done pretty much everything Abramoff has, only his ego ran amuck.  Lobbyist should never gain fame.   In one scene, someone says to him, "You're drawing to much attention to our profession."  Later, someone says to Jack, "For god-sake, you're on the front page of the Washington Post."  and Jack smirks, "Again? Is it above the fold?"  The American public would like to at least think that our politicians are actually working for us and not big money lobbyists.

I do not know Abramoff's story well enough to know how accurate this film may or may not be, and as such will not attempt to dispute any of it.  Spacey is good in the role, but Abramoff is never made a real person here.  As Scott pointed out, we get zero background on him.  He was smart enough to make million dollar deals but could not remember to pay his mortgage?

Abramoff was a producer on the Dolph Lundgren film Red Scorpion.  He proudly hangs the movie's poster in his office.  He broke the law and met many famous people.  He married and has five children.  This guy has so many aspects to his life, but all we see here is the capitalist stereotype.  The film's agenda is far too singular to give a fair opinion of him.

As Scott wrote, Lovits provides some funny moments, but my favorite line goes to Jack Abramoff when he says, "Washington is like Hollywood, but with uglier faces."   Jack used politics for his financial gain while Hollywood uses Jack Abramoff here to express its political opinion.   He indicts Senator John McCain and calls President Bush an, "idiot" and Republicans "hypocrites."

You may think of me as a right wing conspiracy nut job, and personally I do not care.  Just answer this one question.  President Obama gave billions of dollars to companies who can be traced to his campaign contributors.  He did so in the name of creating "green Jobs"  that never materialized.  Some companies. like Solyndra went belly up almost immediately and cannot account for the billions of dollars.  Sure, every President has paid back campaign contributors one way or the other, but his amount is unprecedented.  When is Hollywood going to make that movie?