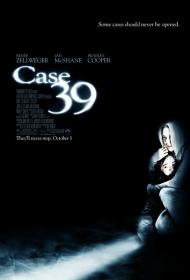 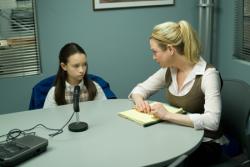 Case 39 was filmed in 2006.  Originally scheduled for a US release date in 2008, it was pushed back again and again, finally seeing release in Europe in late 2009.  Poorly received there, it was reportedly re-edited for the US where it was finally released in October 2010.  With that history, I wasn't really expecting a lot, which is definitely the right attitude to have for these sorts of movies, and was mildly surprised to discover that it's actually not that bad.  Sure, it's strictly a B-movie, but Zellwegger helps to elevate it higher than it probably deserves.

The creepy little kid horror movie has become its own genre and Case 39 definitely fits that description.  Zellwegger plays Emily, a social worker currently working on 38 cases, but at the beginning of the movie is given another case and the movie's title.  She discovers that this case involves a little girl, Lily, whose parents seems scared and hostile toward her.  After the parents try to kill Lily by burning her in their oven, Emily decides to foster Lily herself.  When people around Emily start to die, Emily starts to wonder whether or not Lily's parents really were crazy, or if they weren't the only ones who had a firm grasp on reality.

The only thing that really makes this movie stand out is the presence of several big names.  Along with Zellwegger, you have Ian McShane and Bradley Cooper both playing supporting roles, although at the time this movie was filmed, Cooper's breakthrough hit, The Hangover hadn't been released yet.  They, and young Jodelle Ferland as Lily, do what they can with the limited material.

When I see a horror movie, I expect to be scared or at least made to feel a little creeped out.  While there aren't too many really scary moments (although there are a couple of scenes designed to make you jump) there is a creepy atmosphere around most of the movie.  Bradley Cooper and the hornets is one of the movie's better and creepier scenes as is Zellwegger and the woman in her closet.

One of my biggest problems with this movie (and often these types of movies in general) is the way the supernatural is so easily accepted.  Ian McShane's character, someone who has seemed perfectly sensible for most of the movie, makes the leap to thinking that Lily is a demon based solely on the evidence that she made a phone call.  That's quite a leap.  And Emily too leaps quite quickly to supernatural causes as the root of her problems.

If you've seen horror movies before than quite a bit of the plot will be predictable.  As each character was introduced I guessed to myself whether or not they would survive and was correct every time.  There aren't too many surprises.

October is the time for horror movies and while Case 39 is never going to be a classic, I can see it extending its life on DVD.  Watch it with low enough expectations and you won't be disappointed.