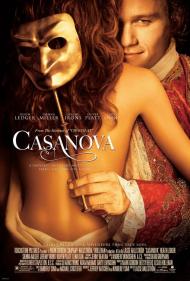 Casanova is nice little romp of a movie, which although it is about one of history's most famous lovers, is actually quite family friendly, despite its inexplicable R rating. It plays fast and loose with historical facts, favoring entertainment over accuracy. This keeps the story light, but its playful tone downplays the danger and the emotional impact. It's basically a historical romantic comedy with modern sensibilities.

As the movie opens, Casanova, the most notorious lover in Italy, is arrested for his debauchery, including the seducing of a nun. Actually, the very first scene is of Casanova as a child where we learn that his mother, an actress, left him in the care of his grandmother, promising to return to him someday. With that as his psychological profile, it's easy to see Casanova's lifestyle as an Oedipus complex run riot as he searches for love from women to perhaps compensate for the woman who abandoned him as a child.

He is given his freedom thanks to his friendship with local royalty, but only allowed to remain in Venice if he mends his ways and takes a wife. Although he soon finds a suitably rich, beautiful and virginal fiancée, his matrimonial plans go awry when he is smitten by the outspoken Francesca (Miller). A staunch proponent of equal rights centuries before the women's liberation movement, or even the suffragettes, Francesca disapproves of everything about Casanova, and so he is forced to pretend to be someone else in his attempts to woo her.

Adding to Casanova's difficulties is the arrival of both a Grand Inquisitor of the Catholic Inquisition (Irons) and Francesca's fiancée (Platt), with whom she has been betrothed since childhood. However, Casanova didn't gain the reputation of being the world's greatest lover by letting little things like a death sentence and a rival for his love's affection get in his way.

The end result of all these goings on is a light hearted film without any real bite to it. Oliver Platt, in a fat suit to further expand his girth, steals several scenes as Francesca's insecure fiancée. The banter between Casanova and his man servant is also worth a chuckle or two. The inquisition however is fairly toothless and the sparks between Casanova and Francesca are kept PG friendly and the reasons for Casanova suddenly falling in love after a lifetime of debauchery are never really explained, except in that romantic comedy staple method of love at first sight.

One of the pleasant things about the movie is its extensive and beautiful use of Venice, where the entire film is set and filmed.

If Ledger were looking for a movie to counterpoint his role as a gay cowboy in this season's Brokeback Mountain, he certainly found it. And while he does have a certain charm and his good looks, this is a safe Casanova meant to appeal to teen girls more than envious men.

What the movie really needs are those Hollywood staples of sex and violence. I hate to sound crass but some nudity and a little blood would certainly have added to the sense of excitement and danger. Without those two things, Casanova is left without teeth.

So while Casanova does provide light and frivolous entertainment and is often times quite enjoyable and fun, it could have been so much more. 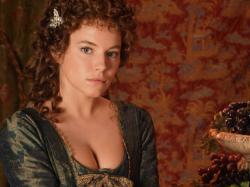 Actually, the movie does explain why Casanova would suddenly fall in love after a lifetime of debauchery. The women he is shown bedding are all pretty much just brainless libido driven bimbos. Francesca challenges him in ways that no other woman has and she actually has a brain. Something he has never noticed in women before.

With a movie about someone so experienced in sex you would think the movie would have explored sex to a greater degree. Disney's animated The Hunchback of Notre Dame had more eroticism than this movie. The raunchiest this movie gets is when a virgin's father says "No intercourse before marriage. Social intercourse, I mean." Another scene has a male virgin losing it to a group of whores. There is plenty of giggling and a very brief look at a bunch of clothed people in bed.

Casanova should have been a lot more bawdy. Making a movie about Casanova and not filling it with sex is like making a western where none of the cowboys get to shoot their gun.