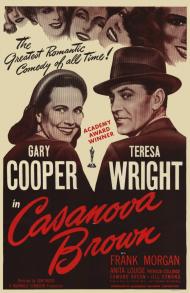 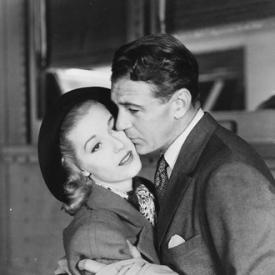 Despite the age difference, Cooper and Wright made a good team.

I have always admired Gary Coopers acting. He was the strong, silent type in many different dramas. Until I saw Casanova Brown, I never knew he did any comedies. Although it is terribly dated, it does allow us to see Cooper in a different light.

The movie opens with Casanova returning to his small Illinois hometown, and to the arms of his girlfriend, Madge, after a trip to New York. A trip he asks Madge to never remind him of. Several months pass, and Casanova and Madge are a couple of days away from getting married. They had the rehearsal and everything is set, until Casanova gets a note from a Maternity Hospital. Worried and nervous, he confesses to Madge’s father, played to the hilt by Frank Morgan, just what happened in New York.

While there to get a book published, he met and married Isabel, played by Pride of the Yankees co-star Teresa Wright. The funniest scene in the entire movie is when Casanova goes to Isabel’s parents mansion. They do not allow smoking in their home and so he puts his lit cigarette into his pocket, which then starts his jacket on fire, which then starts the chair on fire, which leads to the curtains burning and eventually the entire home. The marriage is quickly ended, without him knowing Isabel is with child.

When Casanova visits the Maternity hospital, he sits in the waiting room with the other expecting fathers. They all looked shocked at him when he says he is not married to the mother of his child. After finding out Isabel intends to give their baby up for adoption, he kidnaps their baby and takes her to a hotel room to hide out. There, he is forced to manufacture baby formula as it was apparently not sold in stores then. Isabel has a scene where she says seriously, but not over emotionally, that she wants her baby back. This was long before Amber alerts existed.

Casanova Brown is an awkward goof with good intentions, but he ends up with a Lothario reputation because two women end up fighting over him. Casanova Brown is a veritable time capsule, but it is worth a watch for any Gary Cooper fan.