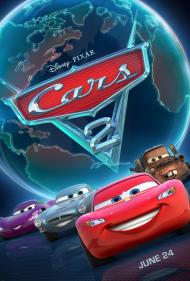 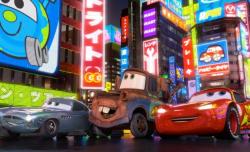 The original Cars was never my favorite Pixar cartoon, but it was still enjoyable. This sequel is even worse. It's the first Pixar film that seems as if it was made for the money; not only in ticket sales, but all the merchandising that goes with it. It looks like a Pixar film, but it sure doesn't feel like one.

I wonder how Owen Wilson feels about being made a supporting character because this time around it is Larry "The Cable Guy" as the dim-witted tow truck Mater who is the lead character. That's the movie's first mistake. Mater was funny in the first film, but as a supporting character, not as the lead. His dumb, but good old boy shtick wears quickly thin, although to be fair, it might please very little children.

Mater accompanies Lightning McQueen as he agrees to participate in the World Grand Prix, a three part race set in Japan, Italy and the UK, that is designed to promote a new renewable fuel. In Japan, Mater is mistaken for an American Spy by British Agents Finn McMissile (Michael Caine) and Holly Shiftwell (Emily Mortimer).  Mater goes undercover to infiltrate a S.P.E.C.T.R.E. like organization who are killing off the racers one-by-one, but can he unmask the mastermind behind it all in time to save McQueen?

The humor is childish and silly. And for a movie about race cars, it feels as though it drags on for far too long. I'm trying to remember one part of it all that I laughed at, but can't do it. The jokes all pretty much consist of Mater doing something stupid, but lucky that ends up moving the plot forward.

One thing that has bugged me since the first Cars movie is that the world these cars inhabit makes no sense.  Their world looks as though it was built for humans, because it looks just like ours, but there are no humans. A world built for cars, by cars, would look a lot different from ours.  And are cars built or born? Their parts and tires can be replaced, but they have eyes and a mouth with teeth and a tongue. They need gas to run, but in one scene they are serving human food.  And why do they have doors? And without opposable thumbs, how do they build anything anyway? I know I shouldn't worry about it, but I was bored enough to have time to think about things like that.

As a fan of James Bond, you might think that I enjoyed Caine's Finn McMissile, since that was obviously the inspiration for his character, but you'd be wrong. I'm a fan of Caine's as well, but I have to wonder why they didn't ask one of the actors who'd played Bond to voice him. Connery may be retired, but is Brosnan so busy right now?

Most Pixar films work on two levels. They have cutesy humor and bright colors for the kids, but also an emotional depth that keeps the adults in the audience equally entertained. That is certainly not the case here. It tries to make some sort of statement about friendship, but it's so shallow as to be meaningless.

Paul Newman's death is acknowledged briefly in the movie and his absence is felt. George Carlin, who, sadly, has also died since the first film, doesn't receive the same gesture, instead his Hippy, VW Van character is voiced by someone else. Although, since his part, like the parts of most of the characters from the first film, is so reduced, it hardly matters.

Although I haven't always enjoyed every Pixar movie, I at least felt as though they were putting everything they could into their product, but I don't feel that with Cars 2. It feels more like a direct-to-DVD sequel than an original Pixar film.

The cars are back but did we ever really miss them?

I too noticed the complete lack of logic applied to the world in which the cars inhabit.  It raises many questions.  Why would living cars build towers that would be nearly impossible for a car to go up, or decorate with water fountains, as water can cause rust? How did they pick all the fruit that decorate that large table?  Who is being worshipped in Notre Dame?

To me, the entire film seems to exist in a world created by a young boy playing with his Matchbox cars.   A child would not stop to apply logic to his play time.  He would just incorporate his imagination into the world he knows.  The only aspect of the film that reveals adults had their hands involved was the talk of alternative fuel.  Children do not care how a car moves fast, they just know it looks cool when it does.

Cars 2 has a better pace than the first film.  The secret agent angle and the three big races allow for many excuses to feature the cars racing, climbing, swinging and flying about.   The movie hardly ever idles.  This makes for plenty of things to watch and be amazed over.

As usual, Pixar does a flashy job on the animation.  The attention to detail is often truly amazing.  The background again features vehicle parts disguised into the landscape.  During the race in Japan, you can see the lights from the city reflected onto the sides of the cars shiny finish as they race down the city streets.

Although Pixar seemed to pull out all the stops to create entertainment, it still lacks in the same way the first one did.  We never truly embrace these characters in a way that allows us to care for them on any real emotional level.  This is made all the more clear by the new Toy Story short shown before Cars 2.  We love those guys to the point that we want to occasionally revisit them.  It would not bother me in the least if I never have to see another Cars movie again.

The gang returns in Cars 2.

I certainly share that sentiment Eric. It wouldn't bother me one bit to never have to watch and review another entry in this franchise. No matter how many human-like qualities they imbue these characters with, at the end of the day they are still just cars. I too find it difficult to get emotionally invested in them. That said I actually enjoyed this Cars more than the original movie.

The plot is a bit more intricate and the story is broader in scope. Eric, when you raised the question of just who or what deity these cars worship in Notre Dame, I immediately thought “humans of course – specifically probably someone like Henry Ford.” It is kind of fun noticing and comparing all the clever little details the filmmakers incorporated from human society into this animated auto-world.

In my review for Cars, which I had only just watched for the first time recently, I commented on how well it holds up visually. I still think that's a true statement but after seeing Cars 2 I can say without hesitation that the CGI technology has noticeably improved in the past 6 years. The water in the opening action sequence is particularly impressive looking. Eric mentioned the reflected images in the shiny finish on the car's themselves. I too noticed just how metallic and substantial they appear here, especially when compared to the first movie.

It didn't bother me that Mater has a bigger part than Lightning McQueen; he is funnier and more original. I enjoyed his introductions with the spy car. “Finn McMissile, British intelligence.” “Tow Mater, average intelligence.” And I chuckled when he mistakes wasabi sauce for pistachio ice cream. Mater: “I'll have some of that there pistachio ice cream.” Sushi Chef: “No, no. Wasabi.” Mater: “Oh, same old, Same old, what's up with you?” Then after he takes a big bite he announces to everyone in a loud voice, “Do not try the free pistachio ice cream! It done turned!” Thanks to his adorable overbite and Larry the Cable Guy's perfectly appropriate voice work, Mater is the most memorable character of the bunch.

Eric, you and I are in the minority of reviewers that enjoyed this installment (slightly) better than the original Cars. Like Scott, most critics felt this one was worse. It holds the dubious distinction of being the first Pixar release to fail to garner an Academy Award nomination for Best Animated Film since that award was created back in 2001. It is also the first Pixar movie to fail to win the Golden Globe for Best Animated Feature since the inception of that prize category in 2007. And, perhaps most telling of all, it is thus far the only Pixar cartoon to average a “Rotten” rating at Rotten Tomatoes. 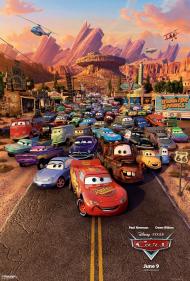