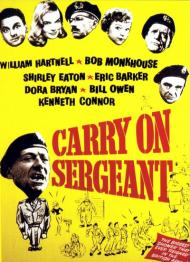 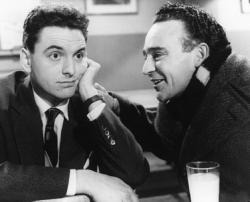 Bob Monkhouse and Kenneth Connor in Carry On Sergeant.

The Carry On films are Britain's longest running film series, comprising 31 films from 1958 to 1992. They are low-budget comedies, featuring a regular troupe of actors, whose humor is based largely on innuendo and double-entendre, with the humor becoming slightly more raunchy as the series progressed. By today's standards however, the jokes are all rather mild and often seem quaint. This is particularly true of Carry On Sergeant, the first film in the series, before the series formula had been perfected.

British institutions are often the target of the films' humor and here the jokes are aimed at National Service, which didn't end in Britain until 1960. The plot is simple and rather silly, while also being slightly more sentimental than the later films would become. The story takes place over the 10 weeks of basic training for a batch of new recruits in the army, beginning on their first day and ending when they graduate from their training.

The recruits are assigned to Sergeant Grimshaw, played by William Hartnell, 5 years before he would become the first actor to enter the Tardis as the title character in Doctor Who. Grimshaw is retiring and these are to be the last troops he trains. He makes a bet with a fellow sergeant that his new platoon will take the top prize following their training, but naturally, his squad is made up of misfits and ne'er-do-wells.

Members of the squad include Charlie; a new recruit who received his call-up papers on his wedding day, Horace; a horrible hypochondriac, Peter Golightly; who lives up to his name and who is obviously supposed to be gay, James; an upper-class effete, and Andy; a guitar playing rock-n-roller. Grimshaw does his best to do what he can with this motley crew, deciding that his best option is to use psychology on them rather than berate them. However, it doesn't take long for him to realize that he doesn't stand much chance of winning his bet unless a miracle happens.

The jokes and humor are all rather gentle and good natured, but still often quite funny nevertheless. Carry On regulars Kenneth Connor as Horace and Kenneth Williams as James, provide many of the film's biggest laughs, as does Charles Hawtrey as Peter Golightly. Hawtrey plays Golightly as a gay stereotype, but he's effectively funny anyway. One seemingly unintentional joke is how all of the actors seem to be in their 30s, rather than the more appropriate age of 18-21.

There's even a touch of farce to some of the jokes, such as when newlyweds Charlie and his new bride--played by Shirley Eaton of being painted gold for James Bond fame--try to sneak into a room on the base to consummate their wedding and end up in the room of Sergeant Grimshaw. As I said, it's all a touch silly, but still manages to amuse.

This is a modest little film, running less than 90 minutes. Although it's rather amusing and quite enjoyable, it hardly seems like the birth of something that would become a British institution, but that's exactly what it spawned. Following this movie, there would be 1 or more Carry On films each year for the next 20 years, with one final film produced in 1992. Carry on, indeed.

William Hartnell and Charles Hawtrey in Carry on Sergeant

I agree with Scott that viewed today, Carry on Sergeant contains gentle humor, but when it was first released, I imagine it was considered a bit mature. One plot line after all is a newlywed couple trying to fornicate. It is easy to see how this could become a series and lead to more adult situations.

The humor is derived from the varied collection of recruits who worry the sergeant upon his first inspection. Golightly notes, "The Sergeant doesn't seem to like us. I wonder why?" Golightly is an occasional scene stealer. As Scott wrote, he is clearly intended to be a homosexual but the jokes are based as much on his incompetent abilities as his effete manners. I will leave it to Patrick to decide how offensive the stereotype is.

I recall from my time in the service that requests and permissions were written on small pieces of paper called "chits." This comes into play during one scene where a man pulls out a wad of them, encouraging another to state, "You're just a heap of chit." Yeah, it is a give away of a joke but Carry on Sergeant does have some good lines. During bayonet practice, one soldier asks, "Don't you think this is a trifle out of date in a world bristling with H-Bombs, Sergeant?"

Not all of the jokes work equally well. The physical humor being the more juvenile. The two men running in and accidentally spraying everyone with fire extinguishers is the most obvious. How easy is it to predict how badly Golightly will do whenever he comes across a muddy hole of water?

Carry on Sergeant not only became a successful film series in England, but some American made films can be traced back to it as well. Both Private Benjamin (1980) and Stripes (1981) owe a nod to this film. It also helped to explain the scene in Monty Python's The Meaning of Life (1983) where Michael Palin yells at some recruits about "Marching up and down the square." Clearly they are poking fun of this film series as much as they are the actual military. 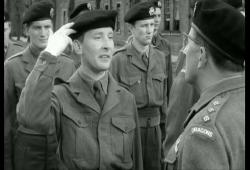 Kenneth Williams in Carry On Sergeant.

As long as we're talking gay stereotypes, I thought the upper-class effete James was much more of one than Peter Golightly. Golightly is a prissy, inept, daydreamer but he comes across as completely asexual to me, whereas James, on the other hand, seems more likely to be a homosexual. Just listen to his dialogue. When the company commander is inspecting the troops he asks James for his rank. He replies snidely, “Well, that's a matter of opinion.” He then goes on to complain about his uniform, “Look at the suit they've given me. Look at this. (pointing to his hat (see photo)) Plopped on my head without even the pretense of fitting.” Later on when told he's standing like he's pregnant James quips, “Wouldn't surprise me after the way I've been mucked about.”

To me he's far more of a gay stereotype than Peter Golightly, who, by the way, gets a big laugh in the scene where he alone keeps marching after halt is called. In explanation he says, “I'm sorry. I was miles away. You know how it is sometimes.” Something about the way he says it just cracked me up. Whether or not either character was meant to be gay (or just very English) they can both certainly be categorized as sissies in their speech, behavior, and mannerisms. Given the decade, however, I didn't find either characterization offensive and both Charles Hawtrey and Kenneth Williams are very funny.

The humor in Carry On Sergeant is very much like a situation comedy. It is a series of short comic scenes and the happy ending is never in doubt. Scott mentioned that the series got less sentimental as it went along. I rather enjoyed the sweet and gentle humor on display here. The double-entendres are all quite innocent. About as vulgar as it gets is when the hypochondriac says he passed the physical examination because he has two of everything you're supposed to have two of. You would never have heard a testicle joke in a Hollywood movie in 1958.

While not a great movie, Carry On Sergeant is an amusing little British comedy. It was cheap to produce and turned a tidy profit so it's easy to see why it launched such a successful and long running franchise.