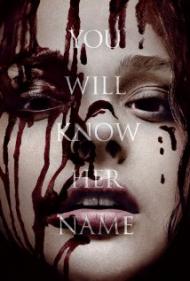 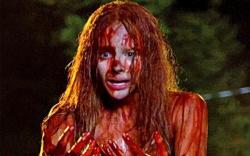 Carrie is a modern telling of the somewhat classic novel by Stephen King. Cell phones, the internet and cyber bullying are the biggest time period giveaways. The special effects likewise give the film a more contemporary look from the original 1976 film starring Sissy Spacek and John Travolta.

The movie begins with a crazed woman giving birth alone in her own bed. By the way she reacts to the infant’s birth we know this child is going to have a horrible life. Carrie White grows up a shy outcast by way of her overly protective, religious fanatic, abusive mother. When Carrie does not do as she demands, she locks Carrie in a closet filled with religious symbols.

Home schooled until the state said otherwise, Carrie finds herself friendless in a public school. She has her first menstrual cycle while showering after gym class. Her mother never explained this would happen to her and the blood scares her. While she is freaking out, the other girls in the locker room throw feminine hygiene products at her yelling; “Plug it up,” while one particular “mean girl,” Chris, records it all on her cell phone.

While the incident scars Carrie, Chris gets punished by not being able to go to prom. Another girl from the locker room feels guilty about the incident. Sue is the popular girl with the jock boyfriend, whom she talks into taking Carrie to prom instead of her.

Meanwhile, Carrie has discovered that she has telekinetic abilities that really come out when she is upset. This all leads to the famous scene of Carrie at the prom getting a bucket of blood poured on her by the vindictive Chris and her boyfriend. What is a humiliated girl with special powers to do when pushed to such limits? Yeah, revenge knows no fury like a pissed off woman.

Carrie is not so much scary as it is a chick flick with special effects. My wife loves this film. The plot is essentially about a dysfunctional mother/daughter relationship. The mother sets strict social rules while the daughter just wants to fit in with her peers. The male characters are secondary and nothing more than archetypes. Tommy is the hero while Billy is the rebel.

For me, the entire story is a lesson on premenstrual syndrome. Carrie only gets her powers after having her first period. Sometimes when women are experiencing the curse, they lose some control of their emotions. Their tempers can be short and they can be miserable. Ask any man who lives with a woman how much fun that time of the month can be and you may get lots of similar stories. As I watched Carrie throw her blood covered hissy fit, I kept thinking how you should never piss off a woman experiencing PMS.

Carrie is quick enough paced and we do feel pity for her situation. She is that stereotypical young girl who desperately just wants to fit in. “The other kids, they think I'm weird. But I don't wanna be, I wanna be normal. I have to try and be a whole person before it’s too late.” However, once she starts her killing spree I lost whatever sympathy I had for her. By that point she is nothing more than a rabid dog that just needs to be put down.