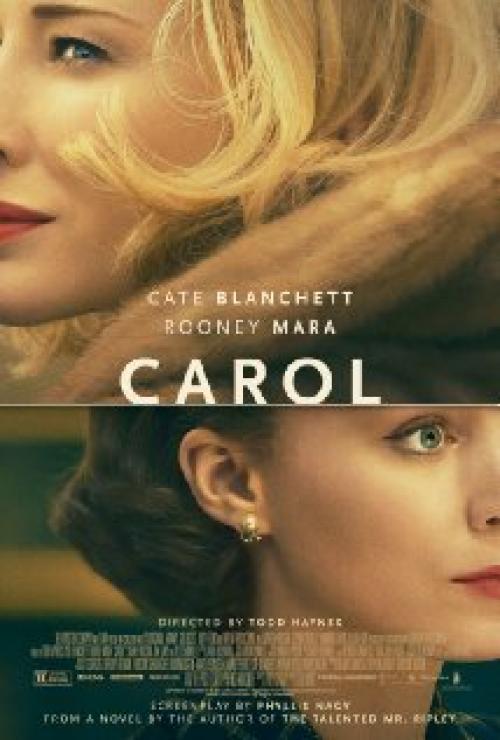 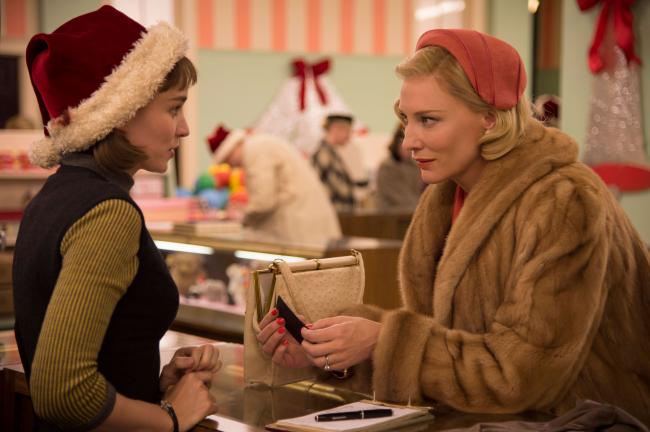 Carol is a beautifully filmed romantic drama directed by Todd Haynes from a novel by Patricia Highsmith (author of several previously filmed novels including Strangers on a Train and The Talented Mr. Ripley). The setting allows Haynes to deftly weave his cinematic magic in recreating Manhattan (among other places) at the holidays in the early 1950s. The sets and costumes are all perfect and the director uses many tracking shots that allow the eye to linger on all the period detail. Dozens of classic automobiles were used. Several times the camera tracks down a city block and then around the corner to reveal more vintage cars and appropriately dressed pedestrians rushing about.

The story is about two women from different backgrounds who fall in love in this buttoned-up and tightly girdled society. Rooney Mara plays Therese, a young shop girl (and aspiring photographer) working at a Macy's like department store. Cate Blanchett plays the titular Carol. She's a wealthy socialite in the middle of a messy divorce. She has one young daughter for whom she is Christmas shopping. Therese waits on her and the two have a brief conversation (see photo). Carol leaves her gloves on the counter and Therese later returns them. From here the two strike up a friendship that eventually turns into a full-blown love affair with all the ensuing drama one would expect.

Carol, like Hayne's earlier film Far from Heaven, is set during America's so-called Golden Age, a time of conservatism and conformity. Also like Far from Heaven, Carol lifts the veil of false innocence on the 1950s and presents us with a love story we don't usually associate with that decade. A love that crosses established gender and class lines. Carol presents a same-sex love at a time and place where it was taboo. In that sense it's a bit like Brokeback Mountain - only with a happier ending.

Exquisite to look at and hopelessly romantic; time spent with Carol is time well spent. 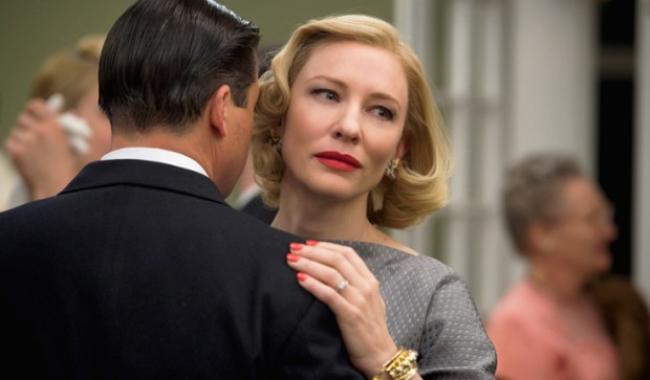 The ending is happier than Brokeback Mountain (But then which love story isn't happier than that movie?), but it's an ending with possibilities rather than promises. When the novel was published in 1952, under a pseudonym due to the lesbian love story, the happy ending for a same sex relationship was a rarity. However, I think the ending is actually the weakest aspect of the story and a less romantic one might have been a stronger way to go.

Certainly the way Haynes has book ended the story, Brief Encounter-like, with an intimate tete-a-tete interrupted by an unaware outsider, foreshadows an unhappy ending. However, this setup is a red herring since this couple, unlike the one in that 1945 romantic weeper, get a second chance at happiness. I think the reason I wasn't satisfied with the way the relationship ended is because what came before it didn't convince me that these two were destined for each other. They both learned a lot about who they were from their time together. Therese becomes a little more confident and assertive, while Carol comes to the decision that she needs to live her life true to herself, while also making the responsible decision to protect her daughter. Apart from the obvious physical chemistry between the two women, they don't really seem to have much in common. I wouldn't call their's one of the great romances of all time.

I agree with Patrick that Haynes and the Production department's attention to detail is phenomenal. The sets, the costumes, the cars, and the hairstyles are all magnificently done. I'm not an expert on the period, but nothing seems out of place. It feels as though you are looking through a window into the 1950s. However, there's one aspect of the production that disappointed me and that is that it is quite obvious that it wasn't actually filmed in New York City. The generic street scenes, without a New York City landmark in sight, makes it obvious, and a quick perusal of the internet after viewing revealed that it was actually filmed in Cincinnati. This normally wouldn't bother me--just look at how many times Toronto has successfully stood in for NYC in movies--but in a movie where so much painstaking effort has gone into recreating a time and a place, it's disappointingly generic. They might just as well have set the story in Cincinnati. There's nothing unique about the story that means it must be filmed in New York. At least that way it would have remained authentic in every detail.

Blanchett and Mara both deliver great performances. As Patrick wrote, just a few years ago their relationship, and their sex scene in particular would have grabbed headlines and even seemed gimmicky, like a bid for attention. But now, it just seems like a natural part of the story. The sex scene is erotic, but it never feels exploitative. I think this is the first same-sex love story that I've seen in a film where the focus isn't on the fact that this is a same-sex couple. That plays a part of the story, of course, particularly on Carol's side in the relationship with her estranged husband and their daughter, but the focus of the story is on the love story itself rather than on the gender of those involved.

This is a beautiful film, with two beautiful performances at its heart. It's not quite a classic love story, but it's definitely enjoyable and I have no doubt its two leads will be in the running this award's season. 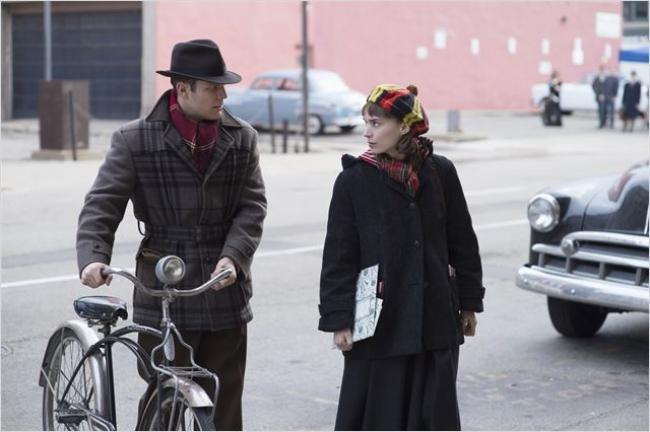 Carol is a romantic love story, made unconventional by the time period. The beauty in any love story or romantic comedy is that the audience watches hoping and waiting for the scene that confirms that the two lovers will commit to each other and head off into the sunset in united bliss. Sometimes it happens like in When Harry Met Sally and some times it does not as in The Way we Were.

In all truth, I never cared if these two ladies ended up together or not. My opinion has nothing to do with their sexual preference but the fact that both hurt people on the way to that final scene. Therese has a fiance, Richard, who struggles to get her to be excited about their life together and a honeymoon in Europe. Granted, a blind man could see that she was stalling out of a lack of interest but Richard is too close to the situation to see it clearly. She waited too long to hint to him that she was a lesbian.

Carol is a horrible person. She marries a man who provided her with a luxurious home and spending money. She has servants and nothing to do all day but shop and look for lovers. She bore him a daughter and then had an affair on him with a woman. He loves her, or at least the idea of her. She pretends for awhile to be the wife he wants but she cannot keep the act up for long. Not only does she have affairs but she practically flaunts them in front of him.

Do not get me wrong. She should not have to keep up the front but how fair is any of this to her husband. No matter what he does he will never get her to love him the way he wants her to. Meanwhile, she enjoys all of the lavish lifestyle he provides. She should get nothing in the divorce as she married him under fraudulent vows. I get that it must be hard to admit to yourself and the world around you, that you are something that society looks down on but is it not hard on those you have lied to and made a commitment to?

Although I did not like the leads, I had a reaction to them, which is clear evidence that the film is fairly solid. Carol is full of herself. She knows she presents well and what kind of reaction she gets from men and some women. It is not until late in the film that we see her at all vulnerable. She may lose her daughter and her lover, yet she still carries herself in such a way that we know she will never become completely down and out.

Theresa just needs to find her voice. She should have told Richard straight off that she preferred pie to popsicles. Instead, Richard has to guess her feelings. I get that Theresa coming to terms with her sexuality is her story arc, but what does she lose in the process? She never stumbles or hits a rough patch. Let me put it this way; if a male character did his fiance wrong, we would expect to see him pay a price for it. Theresa in fact, has very little struggle. Her boyfriend guesses her sexual preference and breaks up with her, so she does not have to do the dirty work. A male friend, who also has a crush on her, gets her a job at the Times.

How am I supposed to find this story to have a happy ending when these two selfish women have hurt several innocent people on the way to that ending? Again, suppose Carol was a man who gave up his wife and daughter for a young shop girl. How much sympathy would we have for him?

Carol is a very well made film. As my brothers noted, the look is impeccable but the lead characters are far too real for me to like. 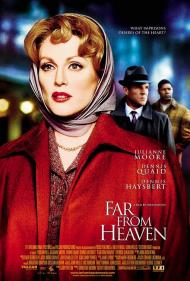 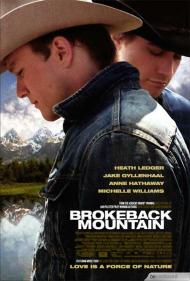