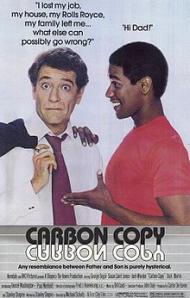 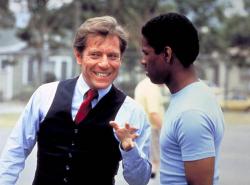 Carbon Copy is a farce based on the simple concept that a white man discovers he has a black son. Its humor is dated (hell it was dated in 1981 when it came out) but it does manage a few laughs, mostly based on race. This movie rarely gets shown on commercial television due to this fact. It is far from politically correct. It was among the many, many movies that my brothers and I first saw on HBO in the early 1980s.

Carbon Copy is best remembered today for being Denzel Washington's first major role in a feature film. He was in his mid-twenties at the time but is playing seventeen. This movie demonstrates that great stars are born and not made. He was a natural in front of the camera, arriving seemingly fully bloomed. He shows a talent for comedy but really shines during the final 15 minutes or so when the story takes a slightly dramatic turn.

George Segal stars as Walter Whitney. He's a respectable businessman living in the mostly all-white community of San Marino, California. When a young black man walks into his office one day with the news that he is Walter's son, neither of their lives will ever be the same. The plot follows a predictable formula as Walter's cushy life crumbles due to the simple fact that he has a black son. He soon finds out how the other half lives as he slowly bonds with his child.

The humor is sometimes funny and sometimes not. In one scene Walter arranges a two-on-two basketball match with a white father and son. He assumes that since his son is black that he must be good at basketball. Things don't go as planned. Here's a sample joke from the movie. Walter is talking to his lawyer played by Dick Martin. The lawyer has just assured Walter that he isn't in any trouble but that he will be representing Walter's wife in the divorce proceedings. Walter replies, “I'm Jewish, my son is Black and my lawyer smokes pot. Don't tell me I'm not in trouble.”

Carbon Copy isn't a very good movie but it does have heart. I have a soft spot for it ever since I first saw it as a kid. If nothing else it launched the career of one of the all time greats, Denzel Washington. 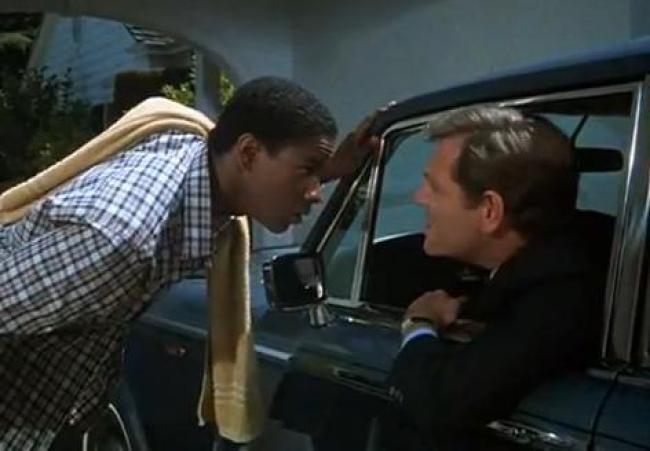 The thing that really dates this movie isn't the racism, but the blatant, quite obviously expected and accepted quality of that racism. In today's politically correct climate, even if the characters were racist, they would probably try to hide it or at least be slightly embarrassed by it. Here everyone expects and accepts racism as the norm. Many of the "jokes" are predicated on the mere fact that Roger is black. That in and of itself seems to be the basis of much of the "humor". And I do use the words "jokes" and "humor" loosely because they're only just recognizable as such. Okay, that's a little harsh. There are a few funny moments, but they're few and far between.

I was less impressed by Denzel's performance than Patrick was, although it has less to do with him than it does with the writing. As my brother said, we had watched this movie several times as kids, but I'd forgotten the ending, which reveals some answers about Denzel's character. Before that ending is revealed, Denzel's Roger comes across as a simpleton, or as someone much younger than 17. He does hold his own in the final scenes, when the film becomes slightly more dramatic, but if someone spotted a future superstar in this performance then they're seeing things that I missed, or they're watching it with the benefit of hindsight.

The supporting cast does provide a few laughs. Dick Martin, of Rowan and Martin's Laugh-In, has a couple of funny lines as the lawyer and Susan Saint-James is amusing as the repressed Waspy wife who gets excited at the idea of taking a young black man into her home so long as it's the trendy thing to do and she's the first one to do it.

This movie could have gone one of two ways. Either as a straight out comedy with even more stereotypes and caricatures, using exaggeration to comic effect to make a point about racism, or it could have played it straight the whole way to make the same point. Instead it tries do both, but with comedy that isn't that funny and drama that comes too late to save the movie.

Everybody has to start somewhere and this was Denzel's somewhere. Those curious to see his humble beginnings might want to check this out, but all others shouldn't waste their time. 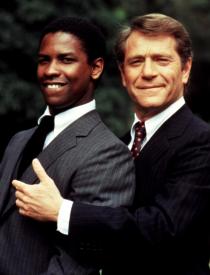 I recall an episode of the television show "Happy Days" where a joke was simply that a military service man took off his cap and was bald. Cue the laugh track. No one made a clever remark to the fact, the joke was merely that he was without hair. Such was the humor at the time. On "Three’s Company" the simple suggestion that a straight man was gay was enough to garner a laugh. Like those shows of the time, Carbon Copy thrives on the idea that a man somehow different than those around him is enough to create humor.

As a father of two sons, I was immediately taken aback by how cold Walter reacts to meeting his own son for the first time. I do not care that the end of the film has Walter admit that when he first saw his son, all he saw was a young black man with only the potential of becoming a short order cook. There should have been a moment of awkwardness, which would arise no matter what the skin color of the son, and then a warm embrace. Walter dated and was in love with an African American woman, you would think he would be more comfortable with a young black man than he acts.

Carbon Copy is meant to shine a light on racial bigotry. Besides being a little snide and sarcastic to his father, Roger is a very polite and likable person to everyone he meets but no one sees any of that. All that anyone sees, or wants to see, is that he is African American. Susan Saint-James is very amusing, condescending to Roger and objecting to her husband suggesting that God could be black. It so upsets her that she calls in a reverend for backup, who insists to Walter that God, is in fact white.

This movie gets lost in its social economic lessons. Roger tries to teach the wealthy Walter a lesson about seeing things from the poor side of town. During a, “winners and losers” conversation with his father in-law, Walter asks, “Why can’t everyone be winners.” It is one of those nonsense liberal questions that sound nice but it is about as logical as the stating that everyone is equal. Walter went to college but he lives off the welfare of his wife’s family. As soon as he steps outside their sphere of acceptability, they cut him out. He is not the winner he pretends to be.

So much of this film is simply based on Roger’s skin color that everything else gets ignored. I wished there had been more heart felt moments between Walter and Roger. Not until the end of the film do we see any emotion between them, and for my money, Washington outshines Segal in the prison conversation scene. Instead of touching scenes we get cruel jokes. While walking on the beach with Roger literally following in his father’s footsteps, Walter jokes about running into the ocean and killing himself. Wow, what son doesn’t imagine meeting his father for the first time only to hear him state that his presence alone is enough for him to ponder suicide?

There is a gem of an idea here but Carbon Copy was very poorly executed. Walter was misplayed. He should have been less shocked and more protective of his son. Roger has a hidden motive but he should have learned a lesson in this story as well. Racism goes both ways and lets not forget that Roger is half white. There are some laughs to be found, mostly provided by the supporting players, but this satire mostly missed the mark, leaving it a relic from a time, thankfully, passed.