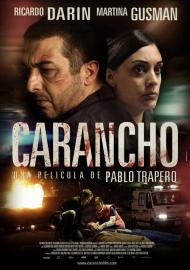 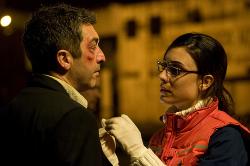 Although here in the USA we think of ourselves as a litigious society, apparently Argentina, where traffic accidents are pandemic, is trying to give us some competition in that department.  Carancho (a type of vulture) explores this world of victims and the ambulance chasing lawyers who prey upon them.

Argentinean film star Ricardo Daran plays Sosa, an aging lawyer who has temporarily lost his license to practice law. To pay the bills he's taken to chasing ambulances to generate business for a crooked law firm whom tends to represent the poor and the ignorant, keeping up to 90% of the settlement for themselves and giving the victim a stipend. Sosa finds the work distasteful and his criminal boss to be despicable, but sees it as his only means of making money until he can get his license returned.

A sense of renewal enters Sosa's life when he meets the beautiful Lujan, a young doctor doing several jobs, one of which is working in an ambulance. Lujan has her own baggage, including a drug addiction, but soon these two world-weary people are finding comfort in each other. Under her influence Sosa decides to leave his firm and help a group of victims get a fair break, but his boss doesn't like the idea and is willing to go to violent extremes to express his displeasure.

Director Pablo Trapero presents a dark and gloomy world.  Almost the entire movie takes place at night in a very unglamorous setting. Even the hospitals are shown to be far from the clean and antiseptic places that we're used to seeing. It's a dirty world, both physically and morally. Trapero also makes extensive use of very tight close-ups, which creates a claustrophobic feel.  On the negative side, he also uses a lot of hand-held camera work that I could have done without.  The jittery, "you are there" look it provides can become annoying, especially as it has been overused in recent years. More often than not I'd prefer be able to see clearly what is happening rather than receive whatever artistic gain the handheld work provides.

Both Daran and Gusman give great performances. They are both rather morally ambiguous characters and yet you want to see them have a happy ending, even if the tone of the film suggests that they probably won't. Far from perfect, they are both decidedly human; flawed and human.

While the movie starts strong and ends with a bang, it does tend to meander a bit in the middle. A tighter editing job and a faster running time would have increased the tension. The slower pacing does seem to be deliberate and helps sustain the gloomy mood so prevalent in the story, but it does undercut any sense of urgency the story might have.

Although it never made the final cut, Carancho was Argentina's entry for the Foreign Language Academy Award. It didn't earn a nomination, but apparently it still managed to impress enough people in Hollywood as an American remake is now in the works. Given our own number of ambulance chasing lawyers, it does seem like a natural story to transplant to the USA.