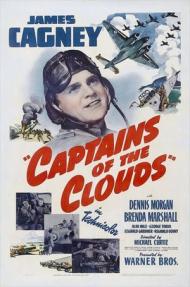 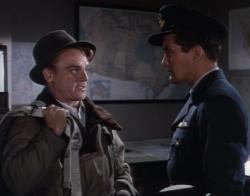 James Cagney in Captains of the Clouds.

Captains of the Clouds is not a very good movie. It is memorable for only 2 things. One, it was the first Technicolor feature starring James Cagney, and 2, it was one of the first movies made by Hollywood about World War II. In fact real Canadian soldiers were used in several key scenes.

The problems with the movie are in the script. Cagney plays a bush pilot in the Canadian Rockies. He plays his usual cocky stock -in-trade character. He steals jobs from the other pilots in the area. He is tough as nails and wised-up to the world. He even steals a woman away from another pilot for that pilot's own good. You see Cagney knows she's no good but the other guy is an innocent rube when it comes to the opposite sex.

Anyway none of this matters much because the real plot doesn't kick in until the last hour. Cagney and his rival bush pilots wind up flying for the Royal Canadian Air Force. Although they are too old for combat they will train recruits and fly supplies.

Finally with about 20 minutes left in the movie the real action kicks in. Cagney and his fellow pilots are delivering planes to England. From out of nowhere they are attacked by a German plane. Cagney must be the hero by flying into the path of the German plane and sacrificing himself so that the others will complete their mission. Easily the best part of the entire movie, although not worth sitting through the first 100 minutes for.

There are some scenic Technicolor shots of Canadian mountains and lakes and the cast tries its level best. But even with the support of Alan Hale and Dennis Morgan, Cagney can't turn this one into a winner.