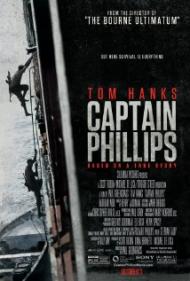 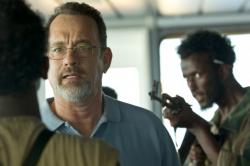 Captain phillips is based on the true story so many of us watched unfold through news reports. If you recall, Captain Phillips was in charge of a cargo ship passing the Somali coast when it was illegally boarded by four armed pirates intent on taking the ship for its content or ransom. When things did not go as the pirates planned, Captain Phillips ended up a hostage in a covered lifeboat with them, heading back to Somalia.

At first, his ship followed the tiny dingy until an American cruiser replaced it. It was then joined by another ship and then a carrier. This leads to the most telling political image in the film. A tiny orange motorized dingy with four armed men is being followed by three huge heavily armed navy warships. Clearly we know who is going to win this conflict but is this not indicative of the problem in fighting terrorism?

In most wars throughout history, armies knew who their opponents were by their country of origin. The war on terror is frustratingly not so clear cut. Factions all around the globe more loyal to local leaders and their religion, yes Somali is a Muslim nation, than an actual flag, take up arms against others for selfish gain. In previous decades the taking of an American ship by citizens of another country could have been considered an act of war. Today’s politicians, for better or worse, tend to blame just the individual citizens who acted.

Even more interesting is that the four men who distracted three naval warships for two days are depicted as hyper active 12 year olds with guns. The pirates run onto the bridge with guns blazing and ignorantly start pushing buttons and hitting switches, thinking they know how to start the ship after the crew purposely shut her down so as to not be forced to take it to Somalia. The pirates argue more with each other than they do with Captain Phillips, who is forced to do whatever they demand. As a rule, I have always found that you can never argue with stupid.

Although Paul Greengrass has a knack for filming tension, it starts a bit slow with Captain Phillips and his wife going to the airport and saying goodbye. This helps to humanize Captain Phillips, but all we need for background is a scene where he briefly tells someone onboard that his wife and kids are fine. The film should have started onboard ship as that is where it ends. If you are not going to show his reunion with his wife then we need not see their departure.

Tom Hanks delivers another solid performance. He plays Captain Phillips as a very ordinary person. He directs the men to get back to work as they grumble about it. He is clearly nervous throughout the attack. In real life, some of the crew has said that Hanks played Captain Phillips more as a hero than he actually was. Either way, the scene where Hanks is rescued and being tended to by a real life U.S. Naval corpswoman is one of the most moving I have seen this year. That scene alone could garner Hanks an award nomination.

Captain Phillips is an example of post 9/11 military challenges. It is also a personal story of mans survival, Captain Phillips’ life at the hands of armed men who are shown trying to survive their way of life as described by their warlords. Greengrass tries to show that there are two sides to this conflict, but wrong is still wrong. 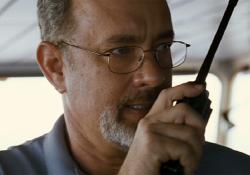 This is, as Eric wrote, a tense and well made film. Despite being based on a true story, with the ending a foregone conclusion, it still manages to retain a degree of suspense throughout most of it.

I agree with Eric about the beginning needing a trim. We learn what we need to know about this fictional version of Captain Phillips as the story progresses. We don't need to see him with his wife at the beginning, particularly as the end of the film stretches on a little too long.

Once everyone is onboard their ships and for the next hour the film is a taut thriller that will keep you on the edge of your seat. The battle to keep the pirates off the ship with only flares, fire hoses and their Captain's wits is the film's best sequence. Although, the scenes following that as Phillips does everything he can to get the pirates off his ship without bloodshed are almost equally as exciting. Once Phillips gets in the lifeboat however, while there is still plenty of tension, there's a feeling of inevitability once the Navy shows up. As Eric said, the scene of these enormous warships following the lifeboat tells you everything you need to know about who's going to win and who is going to lose.

I also concur with Eric about Hanks. He does stalwart work for most of the film, but that final scene is the one that will garner awards attention. His attempts to hold together while clearly in deep shock are so very human and touching that it is impossible not to feel empathy for him. It's a very humanizing moment.

The group of pirates, while not on the same level as Hanks, also do good work. What's most remarkable about their performances is that none of them were professional actors before this film. They simply responded to an open casting call, which is how Barkhad Abdi went from driving a limousine in Minneapolis one day, to working with an Oscar winner in a large budget film, the next. What the script and the actors do so well is to make the pirates three dimensional while keeping them the villains of the film. Greengrass does show both sides of the story, but he never leaves you with any doubts as to who is in the wrong.

There's been a lawsuit by the crew and speculation that casts the real Captain Phillips' heroism into question. However, as this is a fictionalized version of the events, it hardly matters. In this film, this version of Captain Phillips acts heroically. 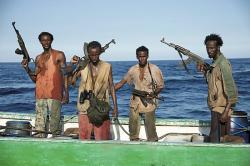 I disagree Scott. It does matter that they made Captain Phillips a hero for the movie. Yes it is a fictionalized account but if you are going to rewrite history then why go through the trouble of being historically accurate on nearly everything else that happened? We watched these events play out on the news and I understand the need to make Phillips a hero for the big screen but they clearly crossed a line in my opinion.

I realize that what was actually said during the attack is hearsay but the script goes out of its way to paint the captain as a hero. Early in the movie he is shown stressing security protocol to the crew when in fact in real life Phillips has said he was never aware of the plan that in the event of an attack the crew should cut the power and hide below deck. Later they show the captain bravely telling the pirates to, “Shoot me if you're going to shoot someone.”

According to the crew not only didn't Captain Phillips say those words but he also never voluntarily boarded that lifeboat as a hostage. They also claim he negligently put the entire ship and its crew in danger by ignoring pirate warnings and sailing hundreds of miles closer to shore than was recommended. According to their attorney the crew have quoted the captain as saying, “He wouldn't let pirates scare him or force him away from the coast.” Now you could argue that these are disgruntled crew members trying to cash in on the situation but Captain Phillips had a well-known reputation for being sullen and arrogant that stretched back a dozen years.

Paul Greengrass is famous for his movie recreations of real events, such as the brilliant United 93. I don't know whether or not this movie is Captain Phillips' version of the events or just a fictionalized script but by completely ignoring the complaints of the crew, Greengrass has seriously tarnished the movie's legacy. Had they changed the names of the participants it wouldn't have mattered but clearly this is supposed to be a true story. It's a case of them wanting to have their cake and eat it too.

Captain Phillips, the movie, is tensely entertaining, although I agree with my brothers that it is needlessly padded, and yes, Hanks gives another Oscar worthy performance. But there is something about it that just doesn't sit right with me.