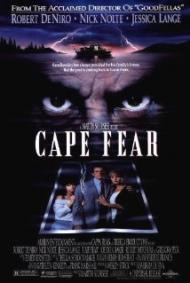 Cape Fear by Martin Scorsese is an homage to the original 1962 version, as well as being his most Hitchcock like movie. He remained true to the source material while updating it for the 1990s. He hired original stars, Gregory Peck (in his final big screen appearance), Robert Mitchum, and Martin Balsam, to play different parts than the ones they played thirty years earlier. He even recycled Bernard Herrmann's score, hiring Elmer Bernstein to do a new arrangement of it. With Saul Bass doing the titles the tribute to the era is complete.

The plot is simple. An inmate (De Niro) gets out of prison after 14 years and seeks revenge against his lawyer (Nolte) by targeting the lawyer's wife (Lange), teenaged daughter (Lewis), and even the family dog. In a series of escalating attacks that culminate on a houseboat on the titular river, Cape Fear is a violent thrill-ride of a movie.

The main difference in the story from the 1962 J. Lee Thompson version is the representation of the Bowden family. In the earlier movie they are a typical happy middle class family. Scorsese makes the morality of his film slightly more complex. Whereas Gregory Peck played his usual noble character as the father, Nick Nolte plays him as a flawed man. He was a lawyer who failed to fully represent his client to the best of his ability (hence Max Cady's desire for vengeance), and he cheats on his wife. None of his actions, however, justify Cady's psychotic behavior, but it does bring a slightly higher level of realism to the story.

The daughter (an Oscar nominated Juliette Lewis) shares a memorable scene with De Niro's Cady (he was also Oscar nominated). They are alone in the high school theater after Cady fools the girl into believing he's her new drama teacher. In the original script this was supposed to be a run of the mill chase sequence but De Niro and Lewis improvised a different scenario. They took things in a more flirtatious direction that culminates with a kiss and De Niro inserting a finger into Lewis's mouth. It's a brilliantly creepy scene.

Max Cady is one of cinema's great villains. A true psychopath, he is a vile and incredibly dangerous man. He is also highly intelligent and incredibly strong. Add in his warped religious fanaticism and you have a truly scary bad guy. Mitchum's performance as Cady possessed a tiny bit more humanity. De Niro went all the way. He really chews the scenery with his creepy redneck accent. He worked out like mad and even had his teeth filed down to look the part; his body covered in fake tattoos quoting scripture.

Personally I prefer the 1962 version. This isn't a subtle story. Therefore the stark contrast between good and evil, as represented by Gregory Peck and Robert Mitchum, works best. It is more iconic and straightforward. Nick Nolte is no Gregory Peck and Jessica Lange is mostly wasted as the mother. The only thing this version does better is the relationship between Cady and the daughter. De Niro and Lewis share the best scene and they both deserved the Oscar and Golden Globe nominations they earned. 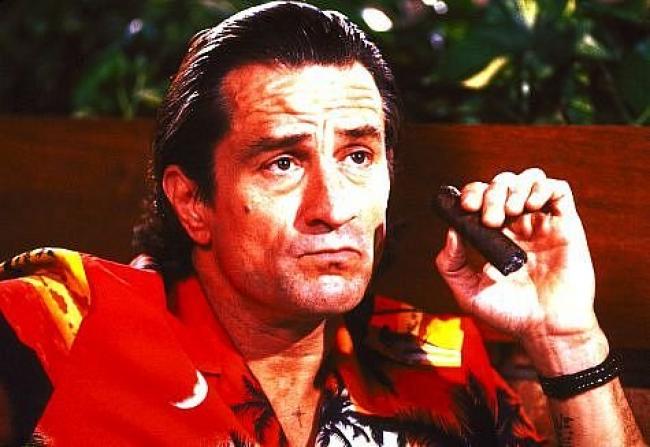 Although this is how I like Robert De Niro, tough and in control, I found his performance filled with more ham than a pig's ass. In his defense, the role of Max Cady is one that requires he act in ways that no rational human being ever would. As Patrick suggested, he takes it over-the-top in several scenes. The most obvious one being when his face is half burned off but it does not impede on him yelling at Nolte, "I'm Virgil and I'm guidin' you through the gates of Hell. We are now in the Ninth Circle, the Circle of Traitors. Traitors to country! Traitors to fellow man! Traitors to GOD!" One of my favorite lines of his is something he says right after defending himself against three men sent to beat him senseless. "I ain't no white trash piece of shit. I'm better than you all! I can out-learn you. I can out-read you. I can out-think you. And I can out-philosophize you."

De Niro is more effective when playing it smaller. Patrick mentioned the scene he shares with Juliette Lewis, in one of her better roles. I will add his delivery of the line, "Counselor! Come out, come out, wherever you are!" It reminded me of a child's game of hide and seek but the way De Niro says it gave me chills.

Cape Fear starts well with an interesting premise that promises tension and forebodes an unhappy resolution for someone. The ending is the climactic action scene on the river boat. The middle of the movie however, gets a bit bogged down in melodrama and some plot holes rear their obvious head.

Cady assaults a woman who could easily put him back behind bars for the rest of his life if she decides to press charges. He just "knows" she will not after spending some time with her drinking and hearing her confess to being in love with Sam. It is too big of a risk for him to take and too big of a coincidence for him to be right. The other thing that bugged me was that early on, Sam gets a restraining order on Cady, yet Cady ignores that order, visiting Sam's house, his wife and his daughter whenever he feels like it. Never does Sam even try to have him arrested for breaking the order.

Cape Fear moves along well enough but it gets a bit lost in its own morality lessons and ill conceived processes. I first saw Cape Fear when it was in theaters and the biggest thing that annoyed me then still annoyed me this time around. The damn soundtrack is so overwrought and dramatic that it nearly makes whack job Cady seem subtle by comparison. A soundtrack is supposed to compliment a scene not jar you out of it. 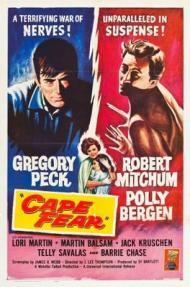