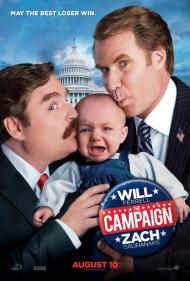 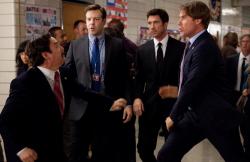 Zach Galifianakis, Jason Sudeikis, Dylan McDermott and Will Ferrell in The Campaign

The Campaign is being sold as a film about two idiots who will do anything to win an election.  The commercials showed Will Ferrell denying that a tobacco company is supporting his campaign while holding up a cigarette on the Piers Morgan show.   It also features Ferrell punching an infant.  The Campaign however, is actually a satire on the government of The United States and how we elect politicians.  For example, of the two scenes I just mentioned, the one involving the cigarette is the one that did not make the final cut.  Hmmm?  With a running time of 85 minutes, there was certainly room for it.

Cam Brady is running unopposed for another term as a South Carolina congressman.  Brady is the stereotypical politician.  He has a trophy power hungry wife, as well as a mistress.  Once his affair comes to light, a large corporation run by the Motch brothers decide he can easily be defeated by anyone they financially back. Enter Marty Huggins who is just your average feminine acting over weight married father.  You can tell just how average he is because his wife and children are all over weight as well.

Marty loves his hometown and is thrilled to be running for office with all the ideological excitement of Jefferson Smith.  The campaign becomes personal right from the start with Brady taking personal pot shots at Huggins.  With Brady leading in the poles, the Motch brothers send in Tim Wattley, a scene stealing Dylan McDermott, who pops up out of nowhere like a vampire and whose final scene is extremely fitting.  He changes everything about Huggins and fights just as dirty as Brady.

Things get so bad that Huggins gets Brady's son to admit on hidden camera that he wishes Huggins was his father.  Brady retaliates by seducing Huggin's wife.  The negative campaign ads they come up with are hilarious.  Most are slams on their opponent.  One however, is quite unique.  To get past the issue of his affair, Brady wants to run a commercial that proudly features his mistress in sexy poses, stating something to the effect that having an affair with such a hot girl makes him a real man and do you not want a real man in office?  It tested high with men.

Although the antics and absurd lengths the two men go to in order to win are often hilarious, the real interesting aspect of The Campaign is what it has to say about our government.  The Motch brothers represent large businesses in this country.  In their first scene they are talking to an elected official whom they bully into voting their way.  They throw their money behind a candidate only so they can use him as they want.

When in a debate, Brady dances around a question about bringing jobs to South Carolina.  Huggins gets applause by pointing out that Brady's answer was the usual Washington song and dance, but he never answers the question himself.  He merely says he needs to clean up the problem without ever saying how, yet that is enough to garner further applause.  Not only is The Campaign stating that big businesses and banks are running our politicians, but it also points at the voters who are not really paying attention, voting on emotions instead of substance.

The one and only time a serious comment is made on an issue ended up being one of my favorite scenes.  After Brady's campaign manager quits, he points to a college aged guy and tells him that he is now his campaign manager.  The fresh faced kid stands up with all excitement and announces that he has all kinds of ideas and how the country has been in trouble since NAFDA and the tax breaks that go to companies that build over seas.  Brady immediately tosses him out and appoints someone else.   There is clearly no room in our government for common sense.

I have seen funnier films than The Campaign but I have never seen a better satire of our political system.  Brady is a self centered, clueless arrogant ass but he stays in office as long as he kisses the money men's asses and tells the people what they want to hear.   Huggins is a man with his heart in the right place who wants to put the people of his state before himself.  That sounds nice but without the banks and businesses backing him, who do you think will win?  Who do you think would win in real life? 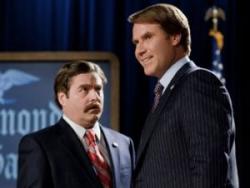 Zach Galifianakis and Will Ferrell in The Campaign.

Not only does Will Ferrell's Cam Brady not want the young man with a Political Science degree to run his campaign, he replaces him with one who has a Sports Marketing degree. The point being, not that there isn't room for common sense in Washington, but that marketing is more important than the issues. In fact, that's the main theme of the entire movie and sadly it's one that accurately reflects the state of politics, and particularly political campaigns, in the United States.

One interesting twist in the way the story is told is that it is the Democrat Cam Brady who is the long term corrupt congressman, while the idealistic upstart is Republican Marty Huggins. As Eric is normally the first to point out, Hollywood tends to lean to the left and so you'd expect the parties to be reversed. Perhaps this is why Eric didn't mention one of his movie pet peeves of the bad guys being rich, old, white guys. Or maybe it's because, as this movie points out, big business and special interest groups don't really care which party or candidate they back, so long as that person puts their needs first.

The combination of Will Ferrell and Zach Galifianakis works well. They're both playing their stock characters, but putting them together helps freshen them up. Ferrell plays the clueless, egotistical, extrovert that he's perfected in Anchorman, Talladega Nights, and other movies. Galifianakis does the odd little man shtick that he does so well. As described by his father, he looks like, “Richard Simmons crapped out a Hobbit.” Their scenes together, particularly at the debates where they trade trash talk, are some of the best.

As Eric pointed out, the running time is quite short. At just 85 minutes, the story doesn't really have time to outstay its welcome. Also as Eric mentioned, there were clearly some edits made between the previews and the final release. Gone is the cigarette scene and in a more bizarre change, Cam is shot in the leg by Marty with a gun in the final cut, but by a crossbow in all of the previews.

This is a satire of the current state of politics, but it's not a subtle one. The humor is very broad and over the top. It does score some political points. I enjoyed the debate where Marty brings up the book that Cam wrote when he was in grade school about Rainbow Land, calling it his communist manifesto. Most often though it is simply content to depict politicians as idiots, easily manipulated by money. The only ones it depicts as dumber than the politicians, are the voters themselves who eat up everything they are told. Maybe what this movie should be asking is, who is the bigger idiot, the idiot who gets himself elected, or the idiots who vote for him. 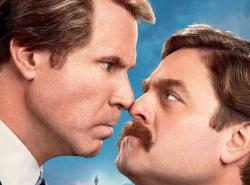 Will Ferrell and Zach Galifianakis face off in The Campaign.

The cast certainly makes this movie funnier than it should be. Will Ferrell and Zach Galifianakis are both very talented comics. The humor is very low brow. Not only does Cam punch a baby but the joke is repeated later with a small dog (Uggie from The Artist). Neither of which is funny. I do agree that as political satire some of the jokes are spot on. What this says about the state of American politics and the gullible/complacent nature of voters in general is pretty sad however.

I'm not a big fan of shock humor. The scene where Marty's young sons tell of their odd sexual exploits is not funny. Children (and old people too) acting out and saying incredibly inappropriate things is a joke that has long since been milked dry.

That's not to say the entire movie isn't funny. On the contrary, I laughed out loud many times while watching it. The line Scott quoted about "Richard Simmons crapping out a hobbit" is hilarious and bears repeating, as does the phone message Cam leaves at a wrong number...

“Hey Shana. It's congressman Cam Brady here. I just stepped away from a family dinner to tell you I wish I wasn't eating fried steak. I wish I was eating Shana pussy. Seriously, baby, you get me so hard my dick presses against my zipper and it hurts like a motherfucker. What else? Oh, hey, I got your parents tickets to The Producers. And, oh, yeah, let's do something crazy weird next time like lick each other's buttholes in a Denny's bathroom. All right, I gotta go. Cam Brady in '012.”

Now that's how you deliver seriously inappropriate dialogue for a laugh.

The Campaign is a decent political satire that uses exaggeration to generate laughs. It is very much of its time however and I don't think it will age well as a comedy. Although in the talented hands of Will Ferrell and Zach Galifianakis, Cam Brady and Marty Huggins are fully realized and truly memorable characters. The most honest thing Cam says about himself is, unfortunately, true of many real people in elected office. “I'm a good politician, I'm just a terrible Congressman.”