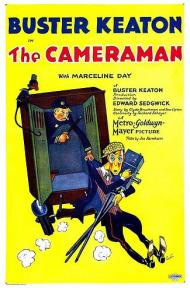 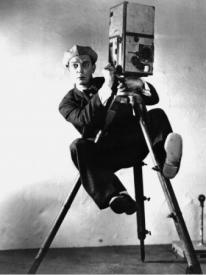 Buster Keaton as The Cameraman

In 1928, MGM absorbed Buster Keaton's neighboring studio into their much larger studio, making him an employee.  The Cameraman was his first film with them.  Reportedly, initial filming had some issues as Keaton had been use to directing himself as well as creating his own routines for his films.  Director Edward Sedgwick supposedly relinquished some control of the film to Keaton as production went on.  IMDB even lists Keaton as an uncredited director on the film.

Keaton plays a man working the streets taking tintypes of people for 10 cents a piece.  A tintype is a photograph developed on the spot on a piece of metal.  He meets a beautiful girl, Sally, on the street and follows her to her job, which is as a receptionist at the MGM motion picture news agency.  Talk about self promotion.

Buster tries to get a job there but first has to get his own moving camera and impress the boss with some good footage.  He wanders around town trying to find something interesting to film.  At one point he takes his camera into an empty Yankee Stadium, where he asks an employee if the Yankees play today.  The guy responds, "Yes-In St Louis."  Keaton then pantomimes an inning of baseball.  In real life he was quite a fan of the sport.

The film's funniest bit is when he takes Sally swimming at an indoor public pool.  After having to share a tiny dressing room with an overweight man, Buster enters the pool in an oversized bathing suit.  To impress Sally, who has garnered the attention of nearly every man in crowded pool, Buster decides to jump off the high dive.  He ends up losing his bathing suit and actually moons the audience a few second later as an embarrassed Buster finds himself naked in a pool that suddenly seems only filled with women.

My brother Scott has often moaned that Keaton's films often lack an emotional connection to the audience.  The Cameraman is actually a love story with a romantic ending.  Buster saves Sally after a boating accident, but she believes a co-worker, who also likes her, did.   Not to worry, Keaton's assistant, a monkey he once killed, filmed the rescue.   The scene of him kneeling on the beach as Sally walks off with someone else is one of his best dramatic scenes.

Do not get me wrong, this is first a comedy.  There is the running joke with the policeman who sees Buster do all kinds of odd things and thinks he is crazy.  The best action scene comes when Keaton films a gang war between Chinese mobs.  The Cameraman does not contain any of Keaton's standout stunts but there is something here for everyone, making this one of his most solid films.

As a last note, the monkey featured in this film is of the same breed as the one featured in Harold Lloyd's film Kid Brother, released the previous year.  The monkey is even dressed very similar.  Whereas this was an MGM film, Lloyd worked for Paramount.  I have no idea if it is the same monkey, and would like to hear from anyone who knows if it was. 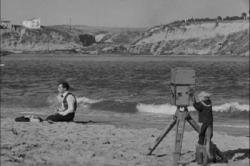 Buster Keaton and a monkey in The Cameraman.

I don’t know for sure if it was the same monkey but there is a good chance it was since both this movie and The Kid Brother employed the same animal wrangler, Tony Campanaro. By the way, he also worked as monkey trainer on Chaplin’s The Circus in 1928. At any rate monkeys were certainly a popular prop at the time.

The Cameraman has some laughs, a cohesive storyline and a bigger budget than Keaton was used to but I don’t think the move to MGM helped his art. His lack of total control means the gags are in shorter supply than you would expect from a Buster Keaton movie.

I did like the fact that they shot a scene at the actual Yankee Stadium as well as some on the streets of Manhattan. Keaton’s baseball pantomime is definitely a highlight although, as with the monkey, he seems to be copying Harold Lloyd whose movie Speedy, which was released earlier that same year, also featured a scene at Yankee Stadium. And though the movie is set in New York the scene at the ocean was clearly shot in California (see photo above).

There is also a scene where Keaton runs up and down several flights of stairs at his rooming house in order to receive a phone call, which was technically groundbreaking. He was the first comic to use an elevator crane to get a shot.

Some of the jokes work better than others. The gag where Buster keeps accidentally breaking the glass in the door to the newsreel office with his camera gets overused. But I did laugh at the running gag with the cop who thinks Buster is completely nuts.

The Chinese gang war is creatively shot as Keaton keeps trying to find a place to film the action without getting in harm’s way, which of course he repeatedly does. Eric, I disagree about the emotional connection with the audience in this movie. Yes, Keaton displays some romantic yearnings but to be honest this was the first time I’ve seen him overdo the pathos. Especially in the scene where he tells the girl’s boss that she was the one that gave him the tip about the war in Chinatown.

Don’t get me wrong, Buster Keaton was far too talented to make a truly bad silent comedy. The Cameraman, while being far from his best work, is still a good film. 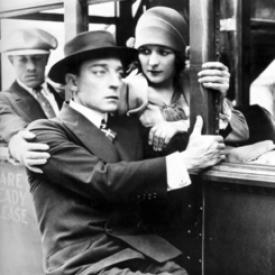 Buster Keaton rides outside the bus in The Cameraman.

Keaton would later call his move to MGM, "The worst mistake of my career", but for this one movie at least, he managed to produce a funny and entertaining comedy while working for his new bosses. Eric, you mentioned the self promotion of MGM by featuring their Newsreel department, but if you look close you can also see a poster for a Norma Shearer movie in the background. Shearer was one of MGM's reigning stars and the wife of famed MGM producer, Irving Thalberg. Evidently they weren't shy about promoting themselves as often as possible.

Patrick, like you I was reminded of Harold Lloyd. Most of Buster Keaton's films have an older, more rural feel to them. Lloyd's work, on the other hand, is very much of the 1920s, as is this movie. The monkey (who is a scene stealer) and the scene at Yankee stadium (which I absolutely  loved) just added to the resemblance to one of Lloyd's films.

There are some innovations, as you'd expect from Keaton. The crane shot as he races up and down the stairs is the most obvious one. What's missing though is that one standout physical stunt that most of Keaton's films contain. He does some great and funny things, but there's just not that one stunt that makes you say, "Wow". It's just about the only thing missing from this otherwise funny film.

Instead of that one moment, we are given sequences, as although there's a cohesive plot of sorts, it's really just a series of shorts connected together. There's the Yankee Stadium routine, complete with the number 6 subway train rattling away past the outfield, as it still does to this day outside the new Yankee Stadium, across the street from where this was shot. There's the sequence at the pool that Eric mentioned. And of course the sequence of Keaton shooting the gang war, which is probably the funniest scene in the entire movie, with the monkey generating as many laughs as Keaton.

Although Keaton maintained a measure of control with this film, reportedly the studio did try to interfere in one way. They wanted Keaton to smile in the final scene (demonstrating, as nothing else could, that they didn't understand Keaton at all), but luckily test audiences complained at seeing the Great Stone Face crack a smile and the scene was removed.

Long considered a "lost film", a copy was found in Paris in 1968. Another, incomplete print, but of higher quality, was discovered in 1991. When shown today, it is generally a combination of those two copies that is seen, with the 1968 version filling in the missing gaps of the 1991 print.

The loss of his independence and the advent of sound may have signaled the end of the major portion of Keaton's career, but at least with The Cameraman he had one last hurrah, and audiences got one more classic film of his to treasure.  It was deemed, "culturally, historically, or aesthetically significant" and added to the National Film registry in 2005.