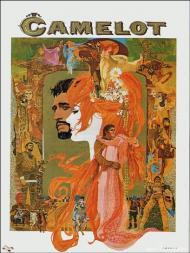 I really do not watch much scheduled television any more, I follow a few of my favorite shows online, on demand or on NETFLIX. What I still enjoy about television though is that I can flip the channel and be surprised by something on that I end up watching. Such was the case today when I came across Camelot just as it was starting. If memory serves me, I recall Scott and I watched it years ago. Either way, it caught my attention and here is my opinion.

Camelot opens with King Arthur sitting in the shadow of a castle where his wife is staying with his former best friend, Lancelot. Arthur is surrounded by his army that plans to attack the castle at dawn. The story of how he and his wife ended up in this situation is then told through flashback. It starts with the day they met.

Arthur, in his early 20s, is in a snow covered forest waiting nervously for the arrival of his bride to be. He sings of his anxiety, when he spies a caravan coming through the forest road. It is Guenevere's bridal party. She is singing of a romantic adventurous life where an alpha male will swoop down and fight for the pleasure of her hand. After wandering away from her chaperones she meets Arthur. He does not have the type "A" personality she dreams of but his passion for his home wins her over. This is done by singing the title song. It is quite catchy. "In short, there's simply not / a more congenial spot / for happily ever aftering than here in Camelot."

They marry and seem very happy together. He comes up with the round table idea and sends invitations, via men on horseback and carrier pigeons, to all the greatest knights of the land to come and sit at his table in order to create peace through equality and debate instead of blood shed. "Where might is only used for right."

One of the knights who answers the invitation is Lancelot of France. He arrives in Camelot where he quickly makes friends with Arthur but his confident demeanor puts Guenevere off. She arranges for him to face three of Arthur's best knights in a tournament, with the idea of embarrassing Lancelot. However, the Frenchman backs up his arrogance and defeats them all, killing one in the process. With Guenevere kneeling close by, Lancelot holds the knight in his arms with his lips a centimeter from his own as he prays and cries for the knight. The knight comes back to life and suddenly Guenevere looks at Lancelot with attraction. Her look does not go unnoticed by Arthur.

Soon Lancelot and Guenevere are having an affair. They fall madly in love in a musical montage set to "If Ever I Would Leave You." Other than the title song, it is the one that has stayed with me the most. Redgrave's voice is not very strong and Nero's singing voice was dubbed by Gene Merlino, yet the song is strong enough to over come those weaknesses.

Although Arthur knows of the affair, he chooses to not deal with it, distracting himself with the sudden appearance of his son Mordred, who eventually uses the affair to his advantage. This all leads to Arthur sitting by the castle pondering the battle to soon begin.

Camelot has some magical moments that only a musical can provide but they are hardly enough to keep me engrossed for the entire 179 minutes. It takes far too long from the time Lancelot shows up and starts doing Guenevere to the moment they are discovered in a romantic embrace. So much should have been cut. Merlin and Mordred should have been removed from the script entirely. Arthur could have discovered the affair himself.

Such songs as, "It's May" and "Take me to the Fair" could have been reduced to a few lines if not eliminated entirely. I understand that this is a musical and the songs are kind of the point, but there is simply not enough plot to justify a three hour running time. Too many songs bog down the pace, and if you want to make the musical argument, then explain why they went with a cast that has little to no singing talent?  Julie Andrews originated the role of Guenevere on stage.

As I was bored this afternoon, Camelot served it's purpose by occupying my imagination for a few hours until dinner was ready. It was not exactly a waste of my time but I doubt I will ever watch it again, no matter what else is on.