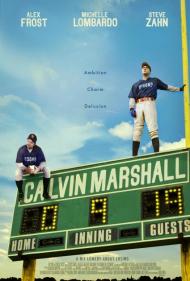 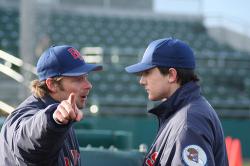 Calvin Marshall is an independent film that took four years to make it to a movie screen. The first two years involved raising the money. When Steve Zahn committed to the project, the money was finally funded. It was filmed in the final months of 2007 and started making the film festival rounds in early 2009. After another two years, it received a legitimate theatrical release in Australia.

Calvin Marshall is a fourth year student at Bayford City College. Every year he tries out for the Bayford Bison’s baseball team and every year he fails to make it. What he lacks in athletic ability he makes up in determination. Coach Little, who is an ex-minor league player, is reluctant to cut Calvin after being impressed by Calvin's persistence.

Calvin also works for the college television station as a sports announcer. While announcing at the Lady Bison’s volleyball team he becomes smitten with their star player, Tori. Calvin approaches Coach Little for advice about Tori. He responds with baseball metaphors, “Step up to the plate. Anticipate her pitch. What’s she gonna throw ya? Look, I’ve seen her, she’s gonna come at you with a fast ball. Trust me. She’s gonna try to get in yer kitchen. You get that club head out front and bam! But cha know, looking at her she’s probably got pretty decent off speed stuff, so if she makes you look like shit and gets ahead of ya, watch out she’s gonna waste one in the dirt or maybe throw one at yer head. You should try to get her to a full count.” Calvin, of course, understands exactly what he is talking about and adds, “Keep my eye on the ball and foul anything close.”

Calvin is naïve and takes things very literally. He pursues Tori who at first seems uninterested, but Calvin eventually breaks her down and they start to date. Tori has personal issues to deal with and is not interested in a serious relationship. After they have sex Calvin, who may have been a virgin up to that point, sees it as a sign of commitment. Tori sees it as merely a pleasant distraction.

Calvin, whose mother is dead and father is long gone, lives with his aunt and her new boyfriend. He is an extremely likable guy. He shows up early to practice and stays late. Calvin’s favorite player is Honus Wagner, who played baseball from 1897 to 1917. Calvin just wants to play baseball and love Tori. Calvin Marshall does not have a traditional happy Hollywood ending. It simply states that no matter how hard we may try, we do not always get everything we want. Although I liked that lesson, it is not entirely satisfactory.

Calvin Marshall contains several familiar faces besides Zahn, whose screen time could have been trimmed a bit. My MLB watching son recognized one of the cast members as Darwin Barney. He was in the Chicago Cubs minor league system at the time this movie was filmed. He has since made it to the show and is now a Gold Glove winning second baseman for the Chicago Cubs. This movie is definitely better if you are a baseball aficionado. 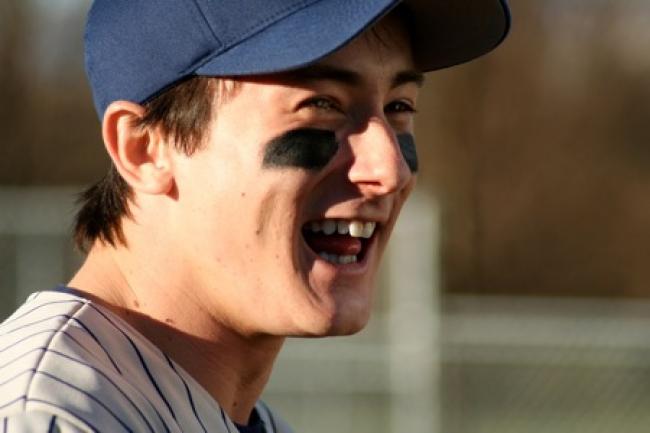 While not a diehard enough fan of the game to recognize Darwin Barney, I do enjoy baseball and baseball movies, of which there have been many classic examples. Unfortunately this isn't one of them. It has good intentions, but I was never caught up in the story and unlike Eric, didn't really find Calvin, or anyone else in the film for that matter, to be all that likable.

Alex Frost, who looks a little like a young John Cusack, is decent enough in the lead role. He plays Calvin with an earnest naivety. His obliviousness to his lack of baseball skills is contradictory. Does he really believe he's good, which would make him deluded, or is he aware that he's not, which makes him a liar? The film never really addresses this issue and it never feels resolved.

It is Zahn as Coach Little who presents the most interesting character and who delivers the most professional performance. Little is a bitter former minor-leaguer who never made the big leagues. He trades on his minor celebrity to get laid in one of the town's seedier dive bars. He drinks heavily and a life of lonely alcoholism seems like his inevitable future, with him sharing the same stories over and over again from atop his bar stool to a dwindling audience. Calvin's enthusiasm for baseball touches some dormant spark within him, but it's not enough for him to find redemption as he makes a play for Calvin's girlfriend. His confrontation with Calvin is the film's emotional climax and although they both seem to reach some sort of turning point afterwards, it's not as satisfying as it should be.

Perhaps it was in part Frost's similar look to Cusack, but the romantic plotline reminded me of the far superior Say Anything. As in that film, the hero of the film dates a girl out of his league who seems destined for greater things. In both films the female lead is dealing with parental issues and both end with her going off to college. Unfortunately, the similarities to that earlier film just reminded me of how much better it was than this one.

This isn't a horrible film by any means, but apart from Zahn's performance it doesn't stand out in any real way.