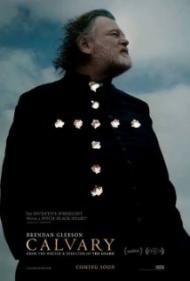 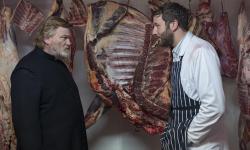 Calvary opens with a priest, Father James (Gleeson), in a confessional. Only instead of reciting the usual litany of mundane sins, the voice from the other side of the confessional states that he was molested by a priest as a boy and as an act of revenge, he is going to kill Father James in one week's time. The killer's aim is to make a point by killing a good priest rather than one known to have committed sins. This threat hangs over the rest of the movie and puts the events of the following week in motion.

Father James looms over the small, but picturesque village on the coast of Ireland. He's a large, shaggy man draped in an old fashioned black cassock. He shambles around the village ministering to the eccentric locals with a calm presence, in spite of the nearly universal contempt with which they seem to regard him. Gleeson is terrific in the part, bringing the viewer inside the story through the eyes of the increasingly troubled priest. The saintly facade that Father James begins with, slips as the story continues and we learn some of his troubled past, particularly when his daughter, from a marriage prior to his joining the priesthood, shows up in the village with bandages on both wrists. There's an assortment of characters in the film, a few of them played by recognizable Irish actors, but it's Gleeson who carries the story on his broad shoulders.

Writer/Director John Michael McDonagh has said in interviews that he structured the film using the 5 stages of grief, those being denial, anger, bargaining, depression, and acceptance. You may not pick up on that structure if you watch the film without prior knowledge, but looking back at it, it's easy to see those stages played out in Father James as the film counts down to the Sunday when the unseen voice has threatened to murder him. With that in mind, you can probably guess that things get fairly dark in tone by the third act. The priest, who so calmly accepts this threat to his life, begins to increasingly unravel, helped along by the troubles of his parish which include a philandering wife, a depressed lord of the manor, an imprisoned serial killer, and an angry pub owner.

Part of what keeps such a dark film palatable is the black humor that interlaces the story. McDonagh keeps things dark, but not depressing by slipping in some sly humor. The village seems exclusively populated by eccentrics, many of whom are worth a laugh or two. It also features two Irish actors more normally known for their comedy in the persons of Dylan Moran, who plays the aforementioned lord of the manor, and Chris O'Dowd, the butcher who may or may not be beating his wife.

McDonagh is also making a statement about the church in the modern world. His dialogue is highly critical of the institution, but he shows Father James to be a good man--almost the only one in the entire village--who is held in poor regard by most of his peers. The film shows the church struggling to retain its place in a world where strangers no longer trust their children to be alone with an unknown priest.

The ending shouldn't be given away before seeing it, but it stays true to all that came before it. This is a small, dark film in sharp contrast to the brightly colored summer blockbusters more typical this time of year. It may be too small a film and released too early to get much awards attention, but Gleeson's performance is certainly worthy of some.

Calvary has one of the most powerful and intriguing opening shots in recent memory. We see Father James' face in the confessional and watch his reactions to the brutal conversation my brother mentioned that sets the plot in motion. It's a brilliant scene that instantly draws the audience in and puts them on edge. Brendan Gleeson is superb as Father James. Like Spencer Tracy late in his career, Gleeson looks and sounds like a man who's lived his life like he was on shore leave. He has a craggy face and a gravelly voice but enough gravitas to carry the world. He holds your attention from the very first second of the movie right up till the denouement.

As the week goes by we accompany Father James as he ministers to his odd little community. It is a strange situation. In light of the past few decades of sex abuse and pedophilia scandals in the Roman Catholic Church, these villagers seem to resent their priest, some even treating him with open rancor. But traditions die hard and so they go through the motions. It's religion by rote, with Father James striding among his flock of lost sheep, a Christ-like figure doing penance for the sins of the church.

Calvary's dark sense of humor saves it from becoming too lugubrious. It is as hauntingly eloquent as it is bleak. From the title, which references the hill where Jesus was crucified, to the Hans Holbein painting The Ambassadors (the exact meaning of which has been hotly debated by art historians and biblical scholars alike; it features two figures: a wealthy merchant and a man of the cloth) being urinated on in one scene, this film is overflowing with religious symbolism. But done in such a way that it never detracts from the story at hand.

A poetic film peopled with vividly drawn characters, Calvary is also a bit of a mystery. Father James alone knows the identity of the man who has threatened his life. This secret is kept from the audience until the big reveal happens on that beach. Suicide is also a theme of this thought provoking motion picture. It examines the differences, if any, between martyrdom and suicide. At one point a character includes Jesus on a list of famous suicides in history. The priest, naturally enough, is not amused.

Calvary is one movie where the overused term, uncompromising, truly applies. Rarely have I seen a film that contains such gut wrenching emotional drama, combined with plenty of darkly ironic humor, delivered in such a thought provoking manner. My one complaint is that the final confrontation is too brief and doesn't resolve all the plot points. But that would be having my cinematic cake and eating it too I guess. A must see for anyone looking for adult fare in the off-season. 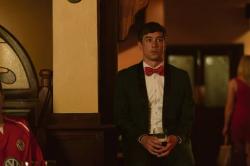 Killian Scott as Milo Herlihy, who just wants to get laid in Calvary

Scott noted that Father James is, apparently, the only good man in this small Irish village. Although the dialogue is highly critical of organized religion, by the end of the film we realize that every town could use a man like Father James. Every now and then we all need someone to question us and our decisions or at least be there when we need an ear to bend.

Father James is very opinionated and inserts himself into the local population’s lives. He talks to one man about his bruised wife and then the wife’s lover. I liked that when the lover quickly pulled out the race card, “You probably think that black people can’t…” Father James shut him down immediately, “Yeah, yeah, yeah. Black people white people, blah, blah, blah”

I however, disagreed completely with Father James when he talked to the sexually frustrated young man who expressed interest in joining the military. Father James tells him that, “I've always felt there's something inherently psychopathic about joining the army in peace time, as far as I'm concerned people join the army to find out what it’s like to kill someone.” I joined the service in peace time and know many that have and I would describe none of us as psychopaths who want to kill.

Father James is not the kind of priest that I ever remember talking to. His advice to the sexually frustrated young man is not to be strong, think pure thoughts or to read the Bible. He tells him he may want to go to a bigger city where there are more girls with fewer morals. In fact, sex is a rampant issue in this town. A male prostitute even claims to have many clients in the area.

As Patrick wrote, Calvary has both dark drama and humor. Dr. Frank Harte’s horrible story about the three year old is one of the most horrifically haunting things I have heard described in a long time. However, I laughed out loud when Chris O’Dowd describes his wife as, “I think she’s bi-polar, or lactose intolerant, one of the two.”

Calvary is not a light watch. Almost no one in this film is happy. As my brothers noted, it constantly discusses suicide, as the planned murder, confessed in the very first scene, draws near. I agree with Patrick’s description of Father James as a Christ figure. He is the moral center of a trouble filled community and he may have to die for the sins of others.