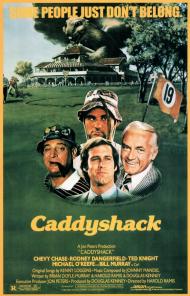 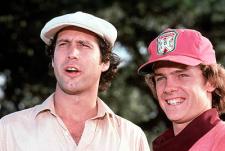 Caddyshack is a very silly movie. A lot of the humor is very lowbrow and some of it is dated. There's very little plot; it's just a series of humorous vignettes tied loosely together. Panned by the critics upon its release, it has since gone to become something of a cult classic and one that is often quoted still to this day. And of course, if for nothing else, it will always be remembered for the dancing gopher.

Although the movie features some famous comedians, the star of the movie is Michael O'Keefe. He plays Danny, a young caddy at a snooty country club. Danny wants to go college, but he has very little money and poor grades in high school. His only shot is to win the scholarship that the country club awards each year. The only catch is that he has to suck up to the snobby Judge Smails in order to get it.

The only other running plot line is Assistant greenskeeper, Carl Spackler's battle with a gopher that has been tearing up the greens. Spackler, played by Bill Murray, is an idiot who spends most of his time ogling older female golfers and growing his own grass, which is a cross of Kentucky Bluegrass, Featherbed Bent, and Northern California Sensemilia. "..you can play 36 holes on it in the afternoon, take it home and just get stoned to the bejeezus-belt that night on this stuff." His ideas for killing the gopher involve flooding him out with a giant firehose and dropping plastic explosives carved like woodland animals into the gopher holes.

Although it is Murray that is most often remembered, I've always preferred Chevy Chase. He plays Ty Webb, an independently wealthy member of the club who spends all of his time golfing, but without keeping score. Watching a young Chevy Chase, I always wonder what the hell happened to him? He was so funny in the late 1970s and early 80s and then his career just fizzled. He has a comic charisma that just works here. He can deliver lines so slyly and with such charm, you're not quite sure if he even gets how funny he is.

There's only one scene with Chase and Murray in it together. Reportedly it was filmed after the rest of the film, when director Harold Ramis realized that his two biggest stars didn't appear anywhere together. Famously, Chase and Murray didn't get along. According to legend, they even got into a fistfight moments before Chase went on to do a monologue on Saturday Night Live, but they manage to produce a very funny scene together here.

Some of the funniest scenes in the movie have nothing really to do with the plot. This is almost a sketch movie. There's the infamous scene in the pool when the floating Baby Ruth candy bar is mistaken for doody. Murray's little "Cinderella Story" bit is another one. Rodney Dangerfield at the dance at the country club is yet another one. My personal favorite is when a Bishop, with Spackler in tow as his caddy, goes golfing in the rain and is having his best game ever right up until the last hole.

Sure, a great deal of the jokes are pretty immature. There's a fart joke in there and a picking his nose, eating the boogers joke. You show this movie to a 10-15 year old boy and if he doesn't laugh at it, you should probably have him examined by a doctor. But hey, we should all be able to let our hair down now and then long to laugh at a little potty humor.

So yeah, I know this movie is silly, but when the final credits roll and that little gopher is dancing to the opening bars of "I'm alright", you just can't help but smile. 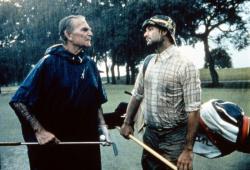 By most accounts Caddyshack is a classic movie. It was famously reported to be Tiger Woods' absolute favorite flick and it has thrice placed on one of the AFI's All Time Best lists. In 2000 it was ranked the 71st funniest comedy, in 2005 the “Cinderella story” quote was listed at number 92 out of the 100 greatest lines, and in 2008 it placed 7th out of the top 10 sports movies. The television network Bravo considers it the second funniest movie of all time (Animal House topped their list). Premiere magazine voted it one of "The 50 Greatest Comedies Of All Time" in 2006 and the following year, “So I got that going for me, which is nice.” was ranked 49 on their "The 100 Greatest Movie Lines" list.

Clearly I'm going against the majority on this one. Caddyshack is one of the most overrated movies ever made. Especially for a comedy that boasts Bill Murray, Chevy Chase, Rodney Dangerfield and Ted Knight. Yes there are occasional laughs to be had but many of the so called classic jokes are only funny if you are twelve. A candy bar mistaken for a turd floating in a crowded pool (for the punchline Murray takes a bite) and Ted Knight getting hit in the testicles with a golf ball are typical examples of the lowbrow humor on display. Bill Murray's oft-quoted "Cinderella story" bit has only become a classic line because golfers love repeating it over and over before teeing off. His zany antics in attempting to kill the dancing gopher are slightly amusing at best and embarrassingly infantile at worst.

As Scott mentioned this movie is a series of sketches strung along a very slight plot line.

I do agree with my brother that Chevy Chase is better (and funnier) than Murray is, but that's mostly because I didn't find Carl Spackler the least bit funny. As Scott wrote, Chase exudes an easygoing comic charm. For my money though, Rodney Dangerfield's old school insult humor generates the most genuine laughs. “Oh, this your wife, huh? A lovely lady. Hey baby, you must've been something before electricity.” and “You're a lot of woman, you know that? Yeah, wanna make 14 dollars the hard way?” are two of my personal favorites, delivered with his old-fashioned New York accent in that unmistakable speaking voice.

Scott, that was Henry Wilcoxon playing the Bishop. He had been making movies since the early 30s and appeared in many Cecil B. DeMille pictures. He played Marc Antony in DeMille's 1934 version of Cleopatra opposite Claudette Colbert as the Queen of the Nile. His movie credits include Tarzan Finds a Son!, That Hamilton Woman, Mrs. Miniver and DeMille's Samson and Delilah and The Greatest Show on Earth. The scene where the Bishop is having his best game ever is definitely the highpoint of the movie. When he gets struck by lighting after blasphemously yelling “rat farts!” heavenward upon missing an easy putt, the background music being played is from The Ten Commandments, in which Wilcoxon played the part of Pentaur. Henry Wilcoxon passed away in 1984 at the age of 78. His last movie appearance was in Sweet 16, the year before he died.

I can appreciate juvenile humor in small doses. Caddyshack provides an overdose. 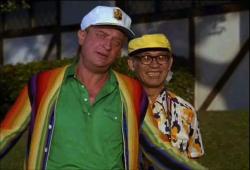 I am more with Patrick on this one. I laughed a few times but was not as impressed as Scott. In fact, I am not sure how he can give Caddyshack four stars when he describes it as a very silly movie with very lowbrow dated humor. He even acknowledges the film is more of a bunch of loosely tied together vignettes than plot driven.

It begins with a superfluous scene of Danny’s large family. The big joke being Danny’s father turning to a child at the breakfast table and not knowing who he is. The movie never returns to his family. At most, Danny refers to his family vaguely when telling Chevy Chase they cannot afford to send him to college. As these characters all seem to live at the country club, that scene should have been cut.

We are intended to root for Danny as this middle class kid takes us inside the world of the idle rich. He starts out likable enough, seeming quite level headed, being surrounded by a bunch of obnoxious jerks. Then he has an affair with the club slut and reacts stupidly when his girlfriend tells him she is pregnant. Danny is never sure what he wants to do until he plays golf at the end of the movie. It is not exactly a life changing ending and I truly never cared what happened to him.

This movie is politically incorrect with racially offensive jokes. The only black person shown at the club is an employee. At one point, Rodney Dangerfield drives his yacht over a black man’s row boat who goes all bug eyed when he sees the yacht coming. When some rich kids smoke pot, one tells another, “This is good stuff. I got it from a Negro. You're probably high already and you don't even know it.” Okay, so I laughed at that joke, but it remains racist none-the-less.

I agree with both Scott and Patrick that the best the movie has to offer is provided by Chevy Chase and Rodney Dangerfield. When Chase refuses to join a golf tournament after a challenger says he is the man to beat, Chase responds, “I guess you’ll just have to keep beating yourself.” Later he refers to a man named; “Cumstein.” (Think about it). As Scott wrote, he knew how to deliver a punch line, never overstating it.

He is the complete opposite of Dangerfield who is anything but subtle. “I hear this place is restricted, Wang, so don't tell 'em you're Jewish, okay?” he says to an Asian man with him at the country club. Dangerfield is so full of life and personality that you cannot help but like him. He even uses his stand up catch phrase; “No respect.” He would basically revisit this character in Back to School (1986).

My 18 and 20 year old son casually watched this with me while social networking and occasionally laughed but Caddyshack never seemed more than an old episode of Saturday Night Live with your host Rodney Dangerfield. Like an old episode, some jokes work while others fall completely flat. This movie may have something to offer but is by no means a four star film.