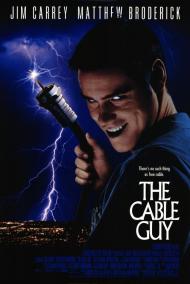 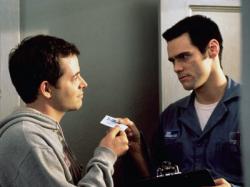 Mathew Broderick and Jim Carrey in the unjustly maligned The Cable Guy.

The release of The Cable Guy was overshadowed by news of Jim Carrey's then record-breaking salary of $20 million.  He was hot off the success of Ace Ventura: Pet Detective, The Mask and Dumb and Dumber and was easily the most popular and successful comic of the time.  Audiences went into it expecting to see him play another silly and likable part, but were instead shocked to find him playing a much darker and twisted character and so it, despite earning a profit, was marked as a flop based on the negative audience reaction.  However, this has always been an unfair judgement in my mind because if you rewatch his movies from the mid-90s, this one is the smartest, funniest and the one that holds up the best.

Matthew Broderick plays Steven, a guy going through a break-up with his girlfriend who moves into a new apartment.  When he orders new cable service, a friend of his (Jack Black in an early role) suggests that he slip his cable guy $50 for free premium channels.  The Cable Guy (Carrey), who claims his name is Chip Douglas, agrees but only after giving Steven a hard time and just generally behaving bizarrely.  However, Chip takes advantage of Steven's offer so that he can worm his way into his life.  Soon he's calling him constantly and just generally stalking him in a Fatal "Best-Friends-Forever" Attraction sort of way.

Carrey does a great job at portraying the bizarre Cable Guy.  His lisp, rubber-faced facial expressions and exaggerated body movements make him generally odd and slightly off-putting.  At first you're wondering is he just a social misfit who needs to get out more or is he genuinely crazy?  As the movie goes on, you're left in no doubt about the answer to that question.  This is one of those characters where you genuinely don't know what they will do next.  His karaoke performance of Jefferson Airplane's "Somebody to Love" makes this movie worth seeing just on its own.

Although he's playing the straight man to Carrey, Broderick is equally effective.  Without his straitlaced persona to play off of, the movie might not have worked.  The two of them share a good comic chemistry together.

As good as the performances are, much of the credit must go to its writers Lou Holtz and an uncredited Judd Apatow (who also produced).  Thanks to them the movie contains some great lines, many of which I still quote today.  I can never be asked for a fork without thinking, "There were no utensils in medieval times, hence there are no utensils AT Medieval Times."  I've often thought during moments of stress that, "You know what the trouble with real life is? There's no danger music."  And of course whenever I hear someone speaking Chinese or Japanese, I always think, "he was speaking another language, I'm pretty sure it was... Asian."

Director Ben Stiller adds his own touch of comedy to the proceedings as well.  Almost the entire cast of his short-lived television show makes an appearance.  Look for brief cameos by Janeane Garofalo, Andy Dick, David Cross and Stiller himself.  Apatow was also a writer from that show. My favorite contribution of Stiller's though has to be the fight scene between Steven and the Cable Guy at Medieval Times when the longtime Star Trek fan reproduces the fight between Kirk and Spock in the Star Trek episode "Amok Time", right down to using the same weapons and music.  It's a very funny scene and an Easter Egg for Trekkies.

Although this movie was considered a flop at the time, almost the entire cast and crew went on to bigger and better things.  Carrey's popularity might have peaked prior to this movie, but his career continued quite healthily after it.  Ben Stiller's career has gotten stronger.  Judd Apatow's career has skyrocketed.  Jack Black and Owen Wilson, who both have small parts here, have gone on to phenomenally successful careers.  Ironically perhaps, the only person whose movie career never really recovered from this movie was the least funny person in the entire thing and that was Matthew Broderick.  This movie and the gigantic flop that was Godzilla just a couple of years later, were the one-two whammy that KO'ed his big screen career.  He hasn't really been in a big hit since then.

If you haven't seen this movie in years or have never seen it because of the bad word of mouth, you should either rewatch it or watch it for the first time.  You might be surprised.

Jim Carrey and Jack Black in The Cable Guy

Scott is correct.  Having revisited The Mask (1994) and Ace Ventura (1994), I too found that The Cable Guy is a much better film.  Not only are the jokes more mature, but the social commentary is a good conversation starter.  At one point, the cable guy says, "You were never there for me were you mother? You expected Mike and Carol Brady to raise me! I'm the bastard son of Claire Huxtable! I am a Lost Cunningham! I learned the facts of life from watching The Facts of Life! Oh God!"   The cable guy even refers to himself as Chip Douglas, one of Fred McMurray's sons on the show, "My Three Sons."

Television has been a huge influence on several generations of people.  The fact that people of a certain age understood those references and others he makes in the film reflect on society as a whole.  Television, before it took a backseat to the internet, kept people at home but also created talking points for the next day.  It was a huge influence on pop culture and political opinions.  One can easily argue that television stunted the intellectual growth of a country.

Today we have more television channels than most of us can count and more information on the internet than we know what to do with. However, our sphere of influence has not actually been broadened.  We merely choose to watch and read what supports our opinions. The Cable Guy even acknowledges the influence of mass communication, "The future is now! Soon every American home will integrate their television, phone and computer. You'll be able to visit the Louvre on one channel, or watch female wrestling on another. You can do your shopping at home, or play Mortal Kombat with a friend from Vietnam. There's no end to the possibilities!"   Many of us are, in some ways, the cable guy.

As played by Carrey, the cable guy is a social misfit who really just wants a friend.  The problem is that he has no clue how to go about getting a friend.  He is obnoxious and over bearing every time he and Steven spend time together and they only do what he wants.  We as a society have spent so much time alone with our technical devices that many of us no longer have the natural instincts to socialize face to face with people different than ourselves.  The internet did not bring the world together.  It brought people with similar interests in contact with each other.

The Cable Guy speaks directly to a particular generation but it also reflects very much on our society today.  Steven is quite brave when he tells the cable guy to his face, "I don't want to be your friend."   How many people today think they are being brave by turning down a friends request on Facebook? 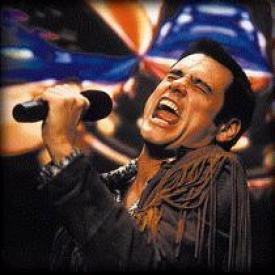 Jim Carrey is The Cable Guy.

I hadn't seen this movie in years and I was pleasantly surprised by it. I didn't like it that much when I first watched it. This time I appreciated it much more. Carrey's performance is comedy gold. His unique talents are perfectly suited for the role of the seriously disturbed cable guy. I agree with Scott that his karaoke rendition of “Somebody to Love” is not only the comic highpoint of the movie but one of the funniest scenes from the entire decade of the 1990s (see photo).

The cast alone guarantees this movie will be remembered. Famous comics abound in nearly every scene. My brothers mentioned most of them but they forgot about Kathy Griffin who appears in a flashback scene as the young cable guy's mother.

The Cable Guy pays homage to television's past while also correctly pointing the way toward technology's future.

Audiences of a certain generation will recognize the various aliases Chip uses throughout the movie. Check out this exchange between the characters played by Black and Broderick. Rick: “I have a list here of every cable installer fired in the last four years. Check out some of these names: Murray Slaughter, George Jetson, Jean Luc Picard, there's even a guy who liked to be called "The Big Ragu".” Steven Kovacs: “Carmine from Laverne & Shirley.” Rick: “That's so sad that you know that. Anyway, the cable company has just fired somebody six months ago named Darrin Stephens. You may remember his boss, Larry Tate, from a little show called Bewitched.” And there is a repeated line by Chip where he says, “This concludes our broadcast day. Click.” How many people today even remember when television stations went off the air overnight?

The line Eric quoted that begins, “The future is now!” was prescient, as today's televisions, computers and phones have all blurred together technologically speaking. And people do play video games online with others all over the planet.

The Cable Guy is funny and smart as the following lines demonstrate...
The Cable Guy: “Women are a labyrinth, my friend. Can I be frank? I don't think you listen to her. I think you tell her what she wants to hear. She wants you to thirst for knowledge about who she is, all the complicated splendor that is women. When your love is truly giving, it will come back to you ten fold.” Steven Kovacs: “You're right. That's incredibly insightful.” The Cable Guy: “I know. It was Jerry Springer's final thought on Friday's show.”