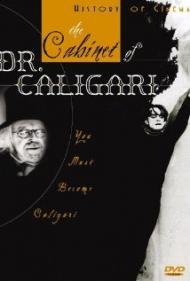 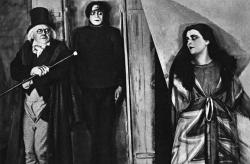 Werner Krauss, Conrad Veidt, and Lil Dagover in The Cabinet of Dr. Caligari.

Silent movies don't get much more groundbreaking than The Cabinet of Dr. Caligari. It is one of the most influential of all the German Expressionist films. It is also considered to be one of the first true horror films as well as the grandfather of all “twist” endings. It was shot completely on highly stylized sets with abstract backgrounds, slanted buildings, and painted on shadows. Visually it's like being inside a nightmare.

The Cabinet of Dr. Caligari is more freaky than scary. The actors behave in an unrealistic manner, moving about the sets with slow jerky motions. The plot centers on a carnival in a small German village. One of the attractions is Dr. Caligari and his fortune telling somnambulist Cesare. A strange figure he keeps in a coffin and awakens for the paying crowd.

When a strange series of murders begins, all clues point to this strange sleeping creature. Cesare eventually kidnaps a young woman and the pursuit of them leads to an insane asylum. When they inquire about an inmate named Caligari, they are shocked to learn that he actually runs the place! But an even more surprising ending awaits.

Directed by Robert Weine from a script by Hans Janowitz and Carl Mayer, The Cabinet of Dr. Caligari was also one of the first movies to use a frame story with the majority of it taking place in flashback. The final scene makes the movie, more than 75 years before M. Night Shyamalan made twist endings trendy.

The look of Cesare is almost humorous. He wears a black sweater, black tights and heavy eye makeup (see photo). He was played by Conrad Veidt who would go on to a long and illustrious career in the movies. He would be immortalized as Major Strasser in Casablanca.

The quality of the print I saw was none too good. This lessened my enjoyment of it. Fortunately a digitally restored version is set to premiere next month (Feb. 2014) at the 64th Berlin International Film Festival. Once this newly restored version makes its way to Blu-ray it will greatly improve the entertainment value of this cinematic treasure.

Conrad Veidt as Cesare in The Cabinet of Dr. Caligari

The Cabinet of Dr. Caligari is quite a trip. The sets and visuals in the flashback story are like an impressionists painting. You can tell what everything is intended to be although nothing looks realistic. This is the first of many clues to the twist. Another, and quite obvious, one is that the old man listening to the younger man’s story looks just like Caligari.

Although a horror film, there is one scene that I found humorous, intentional or not. Caligari needs a permit for his carnival so he goes to see the town clerk. He tells a man there that, “I am a somnambulist” The man then yells, “Fakir!” to a man who would help him with the permit. In case you do not know, “somnambulist” refers to sleepwalking, which is but another clue as to what is actually going on.

The Cabinet of Dr. Caligari is the great grandfather of nearly every one of M. Night Shyamalan’s films. Not only is there a twist to the plot, but it sheds new light on everything else. This tale must have shocked audience in 1920 as it is so ahead of its time. Today it seems quaint but that has more to do with hindsight than any flaw of the film. 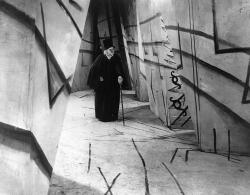 Werner Krauss in The Cabinet of Dr. Caligari.

The ending may be M. Night Shyamalan, but visually this film is much closer in style to directors Terry Gilliam and especially Tim Burton. Can't you just picture Johnny Depp playing Cesare and Helena Bonham Carter playing Jane in a Burton directed remake?

The irony of the film's twist ending is that it seems to be one of the main things it is remembered for and yet the filmmakers never wanted it. Reportedly the studio insisted upon it over the protests of the writers. They wanted a story that showed a corrupt authority figure, while the ending now makes that same authority figure a benevolent one who is going to make everything better.

It really is a pity that the quality of the print is so awful and hopefully the restored version that Patrick mentioned will be much cleaner. The sets are highly stylized and visually interesting, but because of the dirt and scratches it's often difficult to make out. Facial expressions too are completely washed out and although it's not particularly subtle, whatever subtlety there is, is completely wiped out by the dirty film. For such a stylized, impressionistic looking movie, this is a real shame.

There's no question that this was an influential film. It is well known in certain circles. There was a sequel made in the 1980s that dealt with Dr. Caligari's granddaughter. There have also been several remakes, with versions in 1962, 1991 and 2005. It was even adapted into an opera in 1997. References to the story have appeared in everything from comic books to rock songs. Its distinctive look has been mimicked in music videos.

Although this is cited as the first, or one of the first, horror films, today it seems merely creepy rather than frightful. As Patrick wrote, Cesare's look is rather campy. It's closer to Edward Scissorhands than to Freddy Krueger. The bizarre sets, makeup and costumes do give an eerie look to the film and add to the dreamlike quality of it all.

Like many films of its era, this is a historically important one as well as being visually interesting. In terms of entertainment though, it's really only going to be enjoyed as such by film buffs with an interest in silent films.