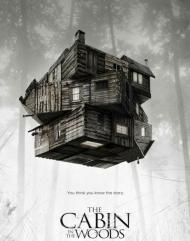 The Cabin in the Woods is a clever, witty new take on an old genre. It combines aspects of the postmodern Scream movies, with their self-aware jokes and humorous riffs on horror movie cliches, with a unique twist, and a full-on blood splattered climax featuring enough carnage to satisfy the most hardcore gore fans. It moves at a brisk pace and keeps the audience guessing right up till the end.

The set-up is a tried and true formula. Five college friends head off for a weekend of partying at the remote titular cabin. These include the usual suspects; the jock, the pretty blond, the brain, the virgin, and the stoner. But they have all been given a refreshing twist in this nothing-is-quite-what-it-seems horror puzzle. The jock is really a nice guy, the brain is handsome and muscular, the blond has just dyed her hair, the virgin isn't really one (hey, they work with what they have) and the stoner turns out to be quite heroic.

We are shown right from the beginning that this is no typical ghost story or simple slasher movie. Two middle-management office technician types (played pitch perfect by Richard Jenkins and Bradley Whitford) are shown setting the scenario up and watching the college kids on high tech monitors. Their scenes add an additional layer to the movie by cleverly parodying office politics.

Clearly this is a carefully planned experiment, but for what purpose and under whose authority?

But if you think you know what to expect, think again. Yes the script is filled with stereotypes and horror movie tropes but just how it makes use of them is quite original, while also paying a winking homage to nearly every horror film ever made. And the story maintains a nice balance between camp and horror, seamlessly blending scares with laughs. A scene where the blond girl French kisses a wolf's head mounted on a wall during a game of Truth or Dare is a perfect example. It's as disturbing as it is hilarious.

Among the five victims, Fran Kranz as the Shaggy-inspired pot-head Marty gets the best lines. He alone questions the decisions being made and the obvious set-up of horror movie conventions they encounter on their way to, and time spent in, the cabin. One of the funniest bits is shown in the trailer where the jock suggests they split up and in an incredulous voice Marty asks, “Really?”

I'm not a fan of movies that rely too heavily on CGI effects. Here they are used sparingly, at least up until the gloriously sick climactic horror symphony crescendo where the computer graphics team's imagination was allowed to run rampant.

It's always a pleasant surprise when a movie exceeds your expectations. The Cabin in the Woods certainly exceeded mine. 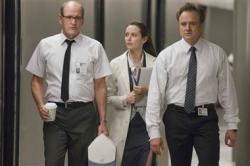 Richard Jenkins, Amy Acker and Bradley Whitford in Cabin in the Woods.

I don't know that this movie exceeded my expectations, but it certainly matched them. That's more to do with the fact that I had higher hopes for it than you did Patrick, rather than my enjoying it less than you. As a fan of its scriptwriter Joss Whedon (creator of Buffy the Vampire Slayer, Angel, Firefly and the author of the original Toy Story script for which he received an Oscar nomination), I was expecting a smart, funny and scary script and that's what he delivered. Director Drew Goddard, who co-wrote the script with Whedon, was also a writer on Buffy and Angel, as well as writing the script to Cloverfield. Together they make a potent combination.

As Patrick said, we are shown from the beginning that this isn't an ordinary horror film. While giving away such a key part of the mystery at first seems surprising, it becomes one of the film's greatest strengths. While we're shown that there is a curtain, we are left to wonder just who the man behind it is and why he put it there.  The scenes in the underground office complex also provides some of the best humor and some respite from the gore in the cabin setting. I also concur with Patrick that Richard Jenkins and Bradley Whitford are terrific in their parts. Fans of Whedon will also spot some familiar faces from his television shows amongst the office workers.

The release date of the film was pushed back due to both legal issues at the studio and because the studio initially wanted to convert the film to 3-D, an idea that Whedon and Goddard successfully resisted. As a result of this delay, one member of the cast stands out more than the others. Chris Hemsworth, who plays the jock, has since gone to star in last year's Thor and will be seen again this summer in Snow White and the Huntsman and the Joss Whedon written and directed The Avengers. All three movies were made after this one. In fact, reportedly it was Whedon who told Hemsworth that he would be perfect for Thor and helped get him the audition to tryout for the Norse God. I suspect if this were being made today that his part would be beefed up.

Fran Kranz does get some of the best lines. He reminded me of a young Owen Wilson. The rest of the young cast does a decent, if unremarkable job as the other victims. They look the part, which is the most important thing and Kristen Connolly, who ostensibly is the star, is likable enough. There's also a big name casting surprise near the film's climax.

While it does play up and poke fun of many horror film tropes, one way in which it differs vastly is that it would be damn hard to come up with a sequel idea that is plausible. It's smart enough and funny enough for one and if it's successful enough, I wouldn't be surprised if the studio pushes for one, but I don't know how they would accomplish it. It would be worth seeing just to see how they could accomplish it.

The Cabin in the Woods is like an episode of "The Twilight Zone".  A very good episode of the classic television show mind you, but a mere episode none-the-less.  Trim everything before arriving at the cabin, the swim scene, the truth or dare scene, the make out scene, the mirror scene, the office drone's scenes and much of the gore and you have a half hour creep show.

I liked the mystery of how and why it all plays out.  The film gives clues early on, such as a painting on a wall.  I wondered why it showed drawings of ancient Aztecs doing ritual sacrifices during the opening credits.  What does that have to do with some college students having a weekend in the woods?  Almost everything gets very succinctly explained, but the ending was not satisfying.

The five college students are intentional stereotypes.  They fit the plot perfectly.   Too perfectly in fact.  We know they were lead, some how, to the cabin but we never find out how exactly all five happen to go along.  As we find out late in the film, all five had to be there for a particular reason.

As both my brothers wrote, Fran Kranz is the standout.  As in the romantic comedy Shades of Ray (2008), he plays a likable goofball.   The rest of the casting is completely based on their looks.  My brothers have complained when I refer to a female movie character with multiple sex partners as a "slut".  The Cabin in the Woods calls a girl a, "whore" because she and her boyfriend are having sex and she likes to wear attention garnishing clothes.  Interesting note is that Anna Hutchison, who plays the whore, was once a Power Ranger.  Jesse Williams has a unique look.  Being half Swedish and half African American makes him look like a hybrid from a science fiction film, and I mean that as a compliment.  Kristen Connolly gets the most screen time and Chris Hemsworth is the big name among the students but Connolly has to merely look innocent and Hemsworth just had to show up in good shape.

Although the film brings most of the loose ends together, it does not end in a satisfying way.  There are screen writing rules.  The more the characters suffer the greater the reward.  Right?  The Cabin in the Woods ends like how an episode of "The Twilight Zone" would, but seriously, WHAT THE HELL? 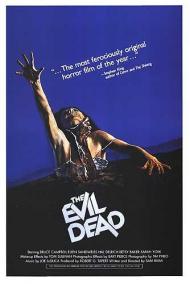