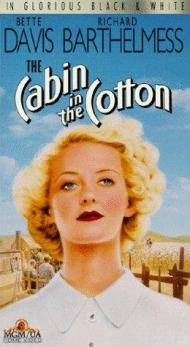 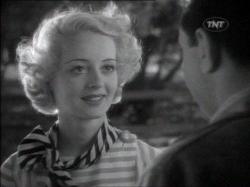 Bette Davis in Cabin in the Cotton.

Richard Barthelmess was fifteen years past his prime when he starred opposite a young Bette Davis in Cabin in the Cotton. At one time he had been a major star. Although not well-known today, he was one of the few silent stars to make a comeback in the talkies. In Cabin In the Cotton he plays Marvin Blake, a poor sharecropper's son living in the rural south.

Due to his intelligence and honest reputation Marvin is handpicked by Lane Norwood, the wealthiest of all the local landowners, for a position as a clerk/bookkeeper in his store. He also catches the eye of Norwood's attractive yet shallow daughter Madge (Bette Davis as the first of many southern belles she would play in her venerable career).

Several plot twists ensue and Marvin quickly finds himself caught in the middle of a class struggle between the rich tenants and the poor sharecroppers. He must also choose between Betty, his faithful childhood sweetheart and the intoxicating charms of the high-spirited Madge.

As Madge, Bette Davis gets to deliver one of her best-known lines of dialogue… “I'd like t'kiss ya, but I just washed m' hayuh."  While clearly a supporting role, she makes the character memorable and gives hints of the formidable talent she would soon become.

Directed by Michael Curtiz, who would go on to direct Casablanca, Yankee Doodle Dandy, Mildred Pierce and many other classic movies, Cabin In the Cotton is a true potboiler. The drama never wavers from start to finish. And though it is mainly remembered today by fans of Bette Davis, it is worth watching as a fair and honest depiction of the rural south during the depression. The director wisely tells the story without choosing sides. Instead letting the audience decide with whom to identify. The author of this script realized what today's politicians - conservative and liberal alike - seem to have forgotten.  Namely that corruption and virtue, alike, are to be found on both sides of any given coin. 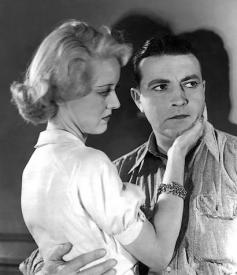 Bette Davis and Richard Barthelmess in The Cabin in the Cotton

Right you are Patrick, Richard Barthelmess was past his prime in 1932 and he looks too old for this role. At 37, he was poorly cast as a much younger man. That may explain why he appears to have a pasty face, like in silent films. It looks like they put makeup on him to make him look younger. It is not convincing as you can still see the bags under his eyes.

The Cabin in the Cotton proudly states at the beginning of the film that it does not take sides. It begins, “In many parts of the South today, there exists an endless dispute between the rich land-owners, known as planters and the poor cotton pickers…” It ends with, “…it is not the object of the producers of The Cabin in the Cotton to take sides. We are only concerned with an effort to picturize these conditions.” As Patrick wrote, the director shows the ugly on both sides. The sharecroppers steal from their boss while their boss thinks nothing of trying to force a couple to take their son out of school so he can work his fields. The argument goes back and forth and is often fascinating enough.

That may have been a social/political issue at the time but it is only interesting today for its historical aspect. By that I mean the use of the word, "Peckerwood." It states here that it was a common term for the sharecroppers. The term’s origin is from the rural south, used to derogatorily describe a poor white field worker. It comes from the woodpecker that has red on its head and neck, in simple terms, “a red neck.” Whenever I hear it I am reminded of Richard Pryor using it in an old Saturday Night Live skit with Chevy Chase.

Where the movie does take a clear side is in the love interests. Betty is a sweet poor girl who is in love with Marvin. Their relationship seems chaste and she loves him for who he is. Madge is meanwhile manipulative, convincing Marvin to move into her father’s house so she may get naked in front of him and seduce him, all the while knowing Betty is in love with him. You know at a single glance at each of these girls who he will end up with.

The best thing going for this movie is Bette Davis. I have never been much of a fan but she steals every one of her scenes as the conniving Madge. Again in agreement with Patrick, she makes the character memorable. Patrick quoted her famous line that Davis told Barbara Walters was her favorite of all time. My favorite bits of hers are when she flirts shamelessly with Marvin. After turning down her offer of a cigarette, Madge coos, "Don't drink, don't smoke... you'll be a preacher yet, won't you Marvin, or something different...? But you'll have to get loose from them." At one point, Madge interrupts Betty and Marvin in mid conversation. She apologizes and says, “I am guessing ol Betty alright used to be your sweetheart. Didn’t she?” She says the line with a knowing, yet wicked smile. She could certainly elevate her material. 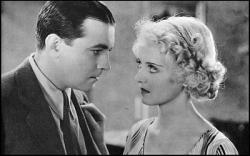 Richard Barthelmess and Bette Davis in The Cabin in the Cotton.

To paraphrase Margaret Mitchell, "Bette Davis was not beautiful, but men seldom realized it when caught by her charm." That description of Scarlett O'Hara by Mitchell can be applied to Davis in this movie. Her Madge isn't traditionally beautiful, but she lights up the screen and your eye is drawn to her whenever she appears. It should be obvious to anyone watching that this is a movie star in the making. Critics of the time certainly agreed, singling her out from the rest of the film. The New York American called her "superb". The Herald Tribune said, "Miss Davis shows a surprising vivacity as the seductive rich girl." While Variety noted that her "rising popularity is the film's best chance for business." Even the New York Times, which was unenthusiastic about the film, at least admitted that Davis, "acts well." although they also made the oddly worded claim that Davis "impersonates the fast Madge Norwood."

Apart from the luminosity of Davis though, I was much less impressed by the film than my brothers seem to be. The plot is pure melodrama. As Eric said, there's never any doubt which woman Marvin will end up with by the time the credits roll, even though Betty is dull as dishwater compared to the platinum Madge. With so little of the outcome in question, there's not much to hold your attention when Davis is absent, which makes the relatively short running time feel longer.

Although the opening caption makes the claim that the filmmakers aren't going to take sides, of course they do. From the very beginning when the rich Norwood orders Blake to remove his son from school and put him back to work in the fields, it's obvious who the villain is. All the crimes of the amusingly named "Peckerwoods" are excused in the film's climactic speech by Marvin. It's Norwood who has cheated his workers and even lynched one of them. But then given that this movie was made at the height of the Great Depression it's hardly surprising that the rich man is going to be shown as the bad guy.

Richard Barthelmess is so far past his prime that he should be playing the father and not the son in this story. As Eric noted, he's 37 and looks it, which is far too old to be playing someone of school age. His weak acting abilities don't help either. The only thing harder to believe than him being a teenager is that the vivacious Madge would find him so attractive. Barthelmess is completely outclassed by Davis's performance. Many years later he would say of her, "There was a lot of passion in her, and it was impossible not to sense....one got the sense of a lot of feeling dammed up in her, a lot of electricity that had not yet found its outlet. In a way it was rather disconcerting - yes, I admit it, frightening."

Davis would make 6 other films with director Michael Curtiz, but reportedly the two didn't get on very well. In Charlotte Chandler's biography of Davis, she quotes the star calling Curtiz a "monster", and saying, " He was not a performer's director . . . You had to be very strong with him. And he wasn't fun . . . He was a real BASTARD! Cruelest man I have ever known." Although she then admits, "But he knew how to shoot a film well." There was no love lost on Curtiz's side either. Reportedly when the studio suggested her for the part of Madge, he replied, "Are you kidding? Who would want to go to bed with her?" And later during filming he was heard referring to her as "a goddamned lousy actress" and a "God-damned-nothing-no-good-sexless-son-of-a-bitch!"

As Patrick said, this movie is remembered best by fans of Davis and that's as it should be. She's a thread of silk running through this dull cotton.