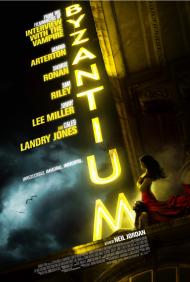 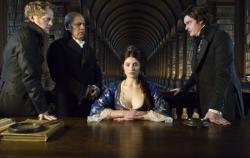 In recent years vampires have been pulled from the shadows and thrust into the flickering light of the silver screen and the glow of the television set. The overexposure of these creatures of the night can be traced back to Anne Rice's Vampire Chronicles and the film adaptation of the first book in that series, which was directed by Neil Jordan who returns to the genre with this film. It's Jordan eye for framing beautiful and haunting shots that helps this movie stand out from the pack. This is an arthouse vampire film.

The film is narrated by Eleanor, a two centuries old teenage girl living with Clara, another vampire who she refers to as her sister, but who is actually her mother. The two of them live life on the run, fleeing from something or someone. Clara uses her eternal youth and beauty to provide for the two of them. Through Eleanor's narration we slowly learn the story of who they were and how they became who they are. This is done mainly in the form of a story that she writes and gives to a boy that she meets and falls in love with.

As is common with modern vampire films, many of the traditional vampire rules are changed. Eleanor and Clara are able to survive in the sun, or at least the day, as most of the film takes places in a damp, overcast English coastal town. They have no fangs and instead use a pointed thumbnail to pierce their victim's skin. The method of their creation is also different, as is the male dominated order under which all vampires live.

Saoirse Ronan is terrific as Eleanor. Her serious voice, formal way of speaking and lilting accent combined with her large sea-green eyes really does make her seem older than her youthful appearance. When she tells her story, as fantastic as it sounds, it's easy to see why those she tells are taken aback in wonder and half-belief. She makes a great contrast to Gemma Arterton, whose Clara is from lower-class origins. Forced into prostitution, Clara has cared for Eleanor the only way she knows how, continuing to use her body to earn her way in the world. She will do anything to defend herself and her daughter.

The story unfolds slowly. There is some action, but it's doled out in careful doses. Eleanor and Clara's backstory is revealed like a mystery as we slowly learn the truth. Jordan frames his shots beautifully and with Ronan and Arterton, he has plenty of beauty to work with. There's mood and atmosphere aplenty.

Despite the glut of vampires from Hollywood recently, this movie proves that in the right hands there's life in the undead yet. 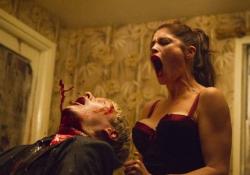 Gemma Arterton is the hottest British actress working. Her looks and body are a sexual fantasy. Although she is playing a vampire, I kept thinking of her more as a succubus. She lures men to her, only to drain them of their money, property or blood.

This film resonates with the passage of time. Byzantium was the ancient Greek city founded in 657 BC on the site that later became Constantinople, which is today called Istanbul. In this film, Byzantium is the name of an old hotel on the English coast. Clara is a beautiful vampire prostitute practicing the world’s oldest profession. Eleanor meanwhile has a fascination with elderly folk and kills them out of pity. It is explained to Clara that they must buy time with blood.

This gothic story of survival is the flip side of so many tales of immortality. In Highlander (1986), Connor Mcleod learned to change his identity and amassed a fortune to live on. Louis chose to drink the blood of animals over humans in Interview with a Vampire (1994). Clara’s survival instinct is just as strong, or stronger, but she does not have the intellect to do it quietly.

Byzantium is a coming of age/vampire film. Clara is an overly protective deranged mother. As Eleanor narrates, “More human souls are killed by mothers' hands than by the hands of strangers. My mother tried to murder me, but love confounded her.” Clara will do whatever it takes, including selling herself and/or killing anyone, to protect her daughter. Eleanor learns to spread her wings while Clara learns the much harder lesson of letting Eleanor do so.

This is not exactly my favorite vampire film but it is certainly better than many. It is dark and moody with a dangerously sexy mystique. No matter what, there are far less entertaining things to do than spend two hours staring at Gemma Arterton and her incredible breasts.