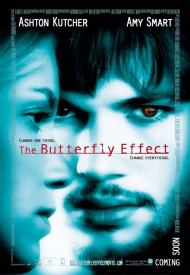 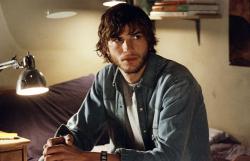 Ashton Kutcher in The Butterfly Effect.

The Butterfly Effect surprised me with its depth and seriousness. Ashton Kutcher usually plays some variation of a goof ball. Here he plays it straight and to great effect.

The movie tells the story of a boy who has blackouts. He has no memory of what happens during those times. His father is in a mental ward for experiencing the same thing. The black outs all seem to occur during very traumatic times in his youth. The only advice he is given to help deal with this problem is to keep a journal.

The movie jumps ahead to when the boy is now in college. He has not had a black out in years. One day he reads from one of his old journals and discovers that he can actually take himself back to one of his black out periods. The fall out from doing so is that it changes people's lives. Each time he goes back, his present life and the lives of people around him change dramatically.

The movie is straight science fiction, but it is played with serious drama. Ashton does a great job of holding this movie together. His performance could have easily become campy or heroic, but he plays it all as if he is just a normal Joe caught up in something bigger than himself.

One of the resolved problems is too simple and not very believable. At one point, he goes back and confronts a pedophile. The movie would have you believe that a foul mouthed 7 year old could convince an adult pervert to stay away from kids and mend his ways just because he said so. It is the one truly weak scene.

The ending was a bit surprising to me, and I will not give it away. It packs an emotional punch that stays with you. I went into this film thinking it would be Dude Where's My Time Machine. Whereas time travel is in the movie, it is more akin to Frequency, only with a better ending. 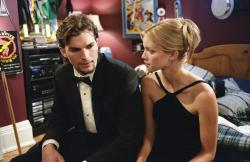 Ashton Kutcher and Amy Smart in The Butterfly Effect

Like Eric, I was surprised by this movie. Even with his assurance that Ashton Kutcher gives a straight performance, I was still expecting some of his normal goofiness to come through. Pleasantly it was completely absent here.

I also agree with Eric about the scene where he stops the child molester with a few simple words. It would certainly have been more believable if instead of talking to him, he had called the police.

The only other problem that I had with this movie is a continuity error. Whenever Evan returns from the past and decides he needs to go back in time again, he returns to his journals. For some reason, although everything else has changed, his journals retain the entries that document his original past before he began meddling. As the past changed, so should have his journals. Time travel stories are usually unbelievable, although I enjoy them, but they should at least abide by the rules that the story has established. Although this is a minor point and one that if you're unaware of before watching, you might not think about it until after it's over.

If Kutcher wants to move beyond his goofball roles, he took a good first step with this movie. 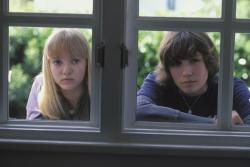 Irene Gorovaia and John Patrick Amedori in The Butterfly Effect.

The Butterfly Effect (named after the chaos theory concept coined by Edward Lorenz in which a tiny change can have profound and far reaching repercussions) is a somewhat enjoyable B-movie with a solid cast. I agree that Kutcher is surprisingly good. He handles the many different situations and realities that Evan finds himself in with equal aplomb. I'm a bit surprised, though, that neither of my brothers mentioned the younger members of the cast. The four main characters are all shown at the ages of 7 and 13. In fact the younger versions get nearly as much screen time as the adults since all the flashbacks involve them. Both John Patrick Amedori and Logan Lerman are very good as the younger Evans.

It is Lerman who delivers the speech to the pedophile that Eric and Scott both found implausible. And I have to agree. It is just one of several plot holes in the rather lazy script. Scott mentioned the fact that the journals never change even though the past has been altered considerably by Evan's tinkering with time. This isn't completely true since in the alternate reality where he loses his hands the journals don't exist, since he never had the chance to write them.

They should have been different every single time though; since whenever Evan travels back in time things change dramatically, with one exception that is. When Evan is in prison and wants to prove to his cellmate that he can time-travel, he goes back and punctures his hands in his grade school classroom. He then returns conveniently to the exact same future where his cellmate thinks he has the Stigmata. Now according to the logic of the movie, this action should have considerably altered Evan's future life. But for the sake of plot expediency it does not.

SPOILER ALERT: Apparently they filmed four alternate endings. In the theatrical version that Eric and Scott saw, Evan and Kayleigh pass on the sidewalk. He recognizes her but keeps walking. Then there was a happy ending version where they stop and talk and agree to get coffee together. Another variation has the same set-up but after they pass on the sidewalk Evan turns to follow Kayleigh. In the director's cut (which is the version I watched), Evan watches an old videotape of his birth. He then revisits himself in the womb and commits suicide by strangling on his umbilical cord, thus fulfilling the fortune teller's prophecy that he has no soul and wasn't supposed to live.

The Butterfly Effect is a decent time-travel thriller but like its multiple endings it's a bit schizophrenic.