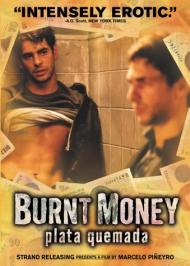 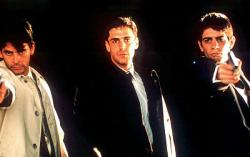 I thought of my brother Patrick as I watched Burnt Money (Plata quemada).  Not only are two of the main characters gay lovers, but one of them is played by Eduardo Noriega, who starred in The Devil's Backbone, which Patrick was the first to review.

Burnt Money is based on some true, well documented events in 1960's South America.   Three young men, are hired to pull off a robbery in Argentina.  Cuervo is a rowdy, getaway driver.  Angel and Nene are the gun men.  Cuervo has a girlfriend and they have sex whenever they can.  Angel and Nene have a similar look and are known as the twins.  They are in love, but they never seem to have sex.

During the robbery two policemen are killed and Angel gets shot.  Along with the brains behind the scheme, they all flee to Uruguay to hide out.  As policemen were killed, the police never stop looking for them.  The movie spends some time with other characters about who is after who and who wants what money, but the three men are the only interesting characters in the film and anytime the camera is on anyone else it becomes boring.

Nene briefly narrates his history.  He became gay when he went to prison.  He met Angel in a mensroom shortly after being released.  Angel hears voices and does plenty of drugs.  Although they are a couple and it is clear they have been intimate, Angel is no longer in the mood.  He prays to God and rambles to himself about keeping his semen.

They all hold up in a room for about a week before boredom and sexual desire forces them out of hiding.  Nene visits a mensroom while Angel goes to a church.  The movie cuts from Angel kneeling down in front of a crucifix and Nene kneeling down in front of a man at a urinal.  Although this film contains a gay love story it has more straight sex than gay.  Cuervo is a horn dog, and has sex with his girlfriend for all to see.  Nene ends up finding comfort with a female prostitute after having Angel turn down his sexual advances.  Apparently Nene is bisexual as he seems to enjoy sex with her very much.

Burnt Money climaxes in a big shootout, with the three men in a room surrounded by hundreds of police.  Although Nene and Angel had their relationship issues, they still clearly love each other up to the inevitable ending.   The looks they share speak for themselves.  I wonder what Patrick would make of Nene and Angel?  They are a unique gay couple to film.  They are tough, gun toting thugs who are gay, not the stereotypical flamer so often depicted in movies.

To answer your question Eric I think that Nene and Angel make one hell of a sexy romantic couple. Their relationship and the performances of the two actors (for the record I think Eduardo Noriega is the hotter of the two) elevates this movie to a higher level than it would otherwise deserve.

Burnt Money is stylish, sexy and violent, but I agree with Eric that the scenes away from the central trio should have been trimmed. It also has some rather awkward editing. But none of that bothers me because Nene and Angel are tragic screen lovers of the classic variety; sort of a gay Bonnie and Clyde with Cuervo as their C.W. Moss.

I especially loved how secure they were in their relationship and unashamed of public displays of affection. The scene at the end where they are lying on the floor in their underwear with their heads together is sexy as hell and oh so romantic. Their world is falling apart around them but they don’t give a shit because they have found their way back to each other at last after losing their way.

After sharing an intense kiss Nene tells Angel, “All you have to do is brush your head against my shoulder and I get hard.” And then Angel reaches over and strokes Nene’s dick before replying, “Me too.” Angel’s inner voices have gone and he once again desires his lover. Hollywood would never have the balls to film that scene. These two are macho as fuck. They make Ennis Del Mar and Jack Twist look like a couple of Nellie Queens.

I’ve loved this movie ever since my partner Rich and I first discovered it about 5 years ago. I’m so glad you reviewed it Eric and compelled me to do so. For all its flaws Burnt Money contains my favorite gay love story.