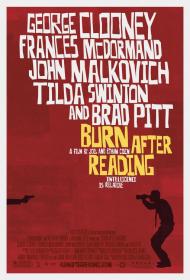 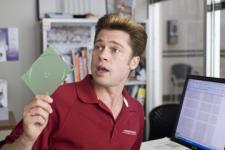 Pitt is terrific, but despite what you might have seen in the previews, is only a supporting character.

Burn After Reading is the Coen Brothers' follow up to their Oscar winning No Country for Old Men. In stark contrast to that dark film, this move hearkens back to their earlier comedies and it is funny. Unfortunately, the humor is undercut by some nepotistic casting.

If you knew nothing about this movie except from what you learned from the previews, you'd be forgiven if you thought Brad Pitt was the star. He's a very minor supporting character. In reality, the star is John Malkovich, whose character gets much less screentime in the trailers. The other stars, both of whom have a great deal more screentime than Pitt, are George Clooney and Frances McDormand.

Malkovich plays Osbourne Cox, an ex-CIA agent who is fired from the service for alcoholism. He is married to shrewish Katie (Swinton) who is having an affair with married philanderer Harry (Clooney). Chad (Pitt), a gym employee of near retarded intelligence, comes into possession of a CD that contains what he thinks is top secret documents, but what is really just the beginnings of Osbourne's memoirs. He shares his secret with Linda (McDormand), who thinks they should try and return the secrets for a reward so that she can pay for some plastic surgery. Linda is also, by the way, dating Harry, whom she met through a computer dating agency.

Like all Coen brother's comedies this one is filled with quirky characters. And as is often the case, it is the supporting characters who are the funniest. Pitt is terrific, as is JK Simmons as a CIA executive who just doesn't want to know. Clooney also does a good job and has some funny moments, particularly with his homemade sex furniture.

However, McDormand (who is married to Joel Coen) is woefully miscast as Linda. Linda is supposed to be an idiot. There's no other reason possible for why she would do the things that she does in this movie. Actually, let me put that another way. She's a ditz and an airhead. At least that's how she needed to be played to be believable. Now, Francis McDormand is a very good actress, but she either doesn't play ditzy very well or she decided to play the character a different way, but in either case she does not work as Linda. I never believed she was as stupid as she'd have to be for her character to make sense. And since her actions are so central to the plot of this story it really damaged my enjoyment of this otherwise excellent film.

The movie does contain a few genuine surprises and quite a few laugh-out-loud moments. With someone different in the role of Linda this could have been a comedy classic, instead it misses the mark somewhat while still managing to entertain. 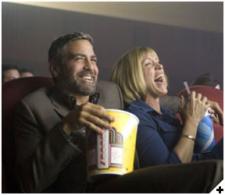 I wish the movie was this funny.

Brad Pitt played my favorite character as well. Being that Pitts career is based entirely on his physical appearance, playing a dim bulb personal trainer is perfect casting. I loved his scene in the car with Malkovich. The only movies I can even stand Clooney in are comedies, but here he has very few funny scenes. His characters only personality trait is sex. Other than his basement project, I never laughed at anything he did.

McDormands role should have been played by a woman who looks like she has already had tons of plastic surgery and ridiculously wants more. At least vanity would have been her motivation. McDormands character goes through a lot of mess for surgery that she really does not need. Maybe she should have walked around with inch thick makeup on thinking that would help her appearance. It just did not make sense that this very casual looking woman would want all of that surgery.

I like the moral of the movie. Simmons CIA boss does not want to deal with the complicated personal issues that cause all of this mess to occur. His response to it is to just ignore it all and keep it quiet. Sometimes things just have a way of working themselves out.

You know at some point that Harry is going to discharge his weapon.

It starts out slowly but by the halfway point I was enjoying myself. By the final scene I had a good chuckle in my throat. Sure I laughed a couple of times before that but I agree with Eric that it needed to be funnier. To me the funniest moment is when Clooney freaks out in the park with McDormand after realizing she knew Pitt. I disagree about Pitt by the way. I found his character to be more annoying than funny.

The Coen brothers are good scriptwriters and they create interesting, quirky characters. I enjoy trying to figure out where their stories are going. For example, Clooney’s character mentioning several times that he never “discharged his weapon in 20 years” lets any fairly savvy moviegoer know that at some point he is going to shoot someone.

McDormand does indeed ruin the movie. Instead of playing her as ditzy and ultra vain, which could have been hilarious; she is just a pathetic woman with low self esteem. And that just isn’t funny.