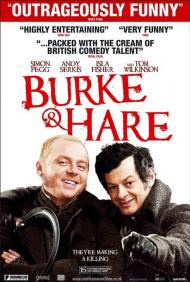 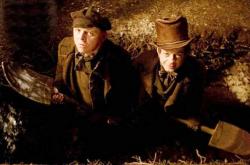 Combining comedy and murder in a movie is tricky. Any sense of realism kills the joke. If you're watching a "real" murder than it's not funny. You need to make the tone farcical. It also helps if you have a member of the cast who is horrified by the murders who can react for the audience. Arsenic and Old Lace is the perfect example of a black comedy that successfully incorporates murder into the jokes. A Fish Called Wanda, when Michael Palin killis the old woman, manages it by being a classic farce.

Burke and Hare is based on the real life story of two murderers in 1829 Scotland who sold the bodies of their victims to a medical college for the students to study. It does manage to be funny in places, but it also tries to some degree at least, to make Burke and Hare three-dimensional and even attempts to make you feel some empathy for them, particularly Burke. This does damage the comedy because you start to take seriously the fact that people are dying.

The deaths start rather similarly to Arsenic and Old Lace actually.  Hare's wife runs a boarding house and one of their tenants dies of natural causes. Strict laws of the time governing the use of cadavers has created a black market for corpses. Once Burke and Hare learn of this, they decide they've hit on a great idea for making money, but waiting for people to die takes too long so they decide to help them along.

Once they become a success, they start to attract attention. The militia start to investigate them. The local villain wants a cut of their take. And Hare draws the attention of a young prostitute/actress played by Isla Fisher, who wants him to produce her all female production of Macbeth.

The cast is filled with recognizable British comedians and character actors. Along with Pegg and Serkis in the lead roles, you have Tom Wilkinson, Tim Curry, Ronnie Corbett, Bill Bailey, Jessica Hynes, Stephen Merchant and even Christopher Lee. The film was director John Landis's first film in 12 years. There's certainly no lack of talent involved. The one area of weakness is in the script, which just isn't sharp or funny enough.

As the opening caption puts it, this movie is based on a true story, except for the bits that aren't. The biggest difference is the ending. (*Spoiler Alert*) In the film, Burke has a change of heart (seemingly out of nowhere) and confesses to the murders after they're arrested in exchange for Hare, Hare's wife and Burke's girlfriend being cleared of all charges. In real life, Hare was offered immunity from prosecution if he agreed to testify against Burke, which he happily did, leading to Burke's hanging. It would have been better to stick to this true version and made Burke and Hare truly despicable and over-the-top. Trying to make the two likable just never really works. As Bill Bailey as the hangman puts it at the very end of the movie, "I know he seemed like a nice guy, but he did kill all those people."

George Carlin once said and I agree with him that anything can be funny if done properly, even a subject like rape. "Picture Porky Pig raping Elmer Fudd." was his example. "I know what you're thinking, 'Elmer was asking for it. Elmer was coming on to Porky.'" And certainly murder too can be used for comedic effect. Yet, somehow, despite all the talent involved, this movie never quite gets the tone right.