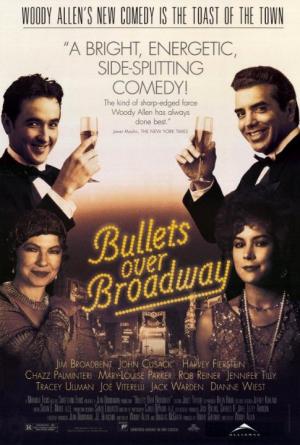 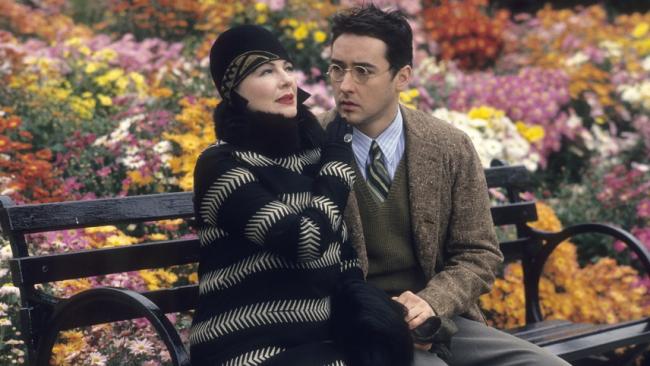 Dianne Wiest and John Cusack in Bullets Over Broadway.

Bullets Over Broadway began a new era in Woody Allen's film career. It was the first time he used another actor as a stand-in for himself – something he has done more and more frequently as the years have gone by. The young playwright David Shayne is an obvious Allen character and John Cusack is terrific in the part. This was also Allen's first movie as writer/director not to feature one of his three previous leading ladies, Louise Lasser, Diane Keaton or Mia Farrow. Since then, as of this writing, although he's cast a few women more than once, Woody's been shy to commit, instead being content to play-the-field, so to speak, when casting his female leads.

Bullets Over Broadway has three great roles for women. Helen Sinclair, a melodramatic actress hilariously played by Dianne Wiest (she won the Oscar for Best Supporting Actress); Olive Neal, a gangster's moll with dreams of stardom but no talent, Jennifer Tilly at her most annoyingly ditzy; and Tracey Ullman makes the most of Eden Brent, another actress in the show. She's a friendly peacemaker, if a bit silly at times. Mary-Louise Parker is a bit underused as Ellen, David's long suffering live-in girlfriend.

In a nutshell, playwright David Shayne gets backing from a gangster for his first Broadway play, God of Our Fathers. As director of the play, he agrees to cast the gangster's moll in a major role. The moll's wiseguy escort Cheech (Chazz Palminteri) turns out to be a theatrical genius who turns Shayne's overwrought plot and stilted dialogue into a compelling dramatic masterpiece. Meanwhile the overly dramatic leading lady, Helen Sinclair, is wooing the play's author/director, “Hush, don't speak!” (see photo) and the play's leading man (Jim Broadbent) is off his diet and chasing after the gangster's moll.

This is one of my favorite Woody Allen farces. It's very funny and quickly paced, and the cast is as good as you would expect them to be. Like all of Woody's period movies, it's tinged with nostalgia for the time era. This Times Square never really existed but we recognize it instantly. In 2014 Allen adapted a stage musical version of Bullets Over Broadway for the real Broadway and it ran for well over a hundred performances. But film lives forever and Bullets Over Broadway is a comedy classic from one of the all time great American filmmakers.