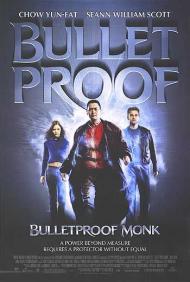 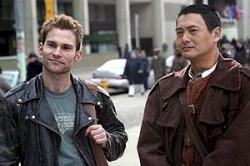 I read comic books throughout my childhood and teen-age years, and it used to bother me when people would belittle them as cheap, childish, trash.  A great many comic books feature characters and storylines as least as in-depth, interesting, and complex as anything you'll find on television.  Yet for some reason people always assume they are for children.  Then something like Bulletproof Monk comes along, the latest comic book adaptation to come out of Hollywood, and you realize exactly where people get these preconceived ideas about comic books because this movie, while not cheap, is very childish, and just a little trashy.

Yun-Fat Chow stars as a Tibetan Monk with no name.  He is one in a long line of Monk's who stand guard over an all-powerful scroll, the contents of which, if read, could transform the world into an ultimate heaven or an ultimate hell.  Each of the guardians is granted super-natural powers with which to protect their treasure, including lasting youth for the 60 years each guardian serves.

The movie begins in the 1940s.  A Nazi officer and his men arrive at the Tibetan temple where the scroll resides, in an attempt to steal it.  The Monk with No Name, also known as the Bulletproof Monk, manages to escape by throwing himself off a cliff, taking the scroll with him.

Flash-forward nearly 60 years and the Monk is walking the streets of America, still on the run from the same Nazi, who, although now confined to a wheelchair, is still hot on the trail of the mystical scroll, only now he has the help of his evil, but attractive Grand-daughter.

Enter Seann William Scott as a young thief who soon becomes the Monk's protégé and potential replacement.  He's supposed to be the charmingly cocky comic relief of the film and to his credit he has the cocky part down if not the other two.  Which gives him one more personality trait than Yun-Fat Chow who is merely relegated to the same mystic martial artist character that we've seen in about two-hundred and six movies before this one.

Together they Miyagi and Daniel-san through the excuse this movie calls a plot, which is basically just them being chased by the Nazis until the inevitable climax.  What little subplot there is revolves around Kar (Scott's character) falling in love with a Russian Mafia Princess.

Being that this is a Martial Arts movie you'd expect that at least the fight scenes would be entertaining.  Sadly, this is not the case.  Using a combination of moves stolen from Crouching Tiger, Hidden Dragon and The Matrix, the fights lack any originality.  The fights are so bloodless and sanitized that they lack any tension.  During the final big battle when I should have been caught up in the moment, I was instead checking my watch to see how much time was left until I could leave.

With most movies that I find lacking, I usually can see how in my opinion it could have been better.  With Bulletproof Monk I couldn't even summon the interest or energy  to do that. 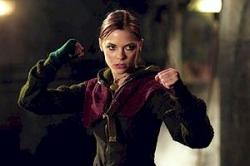 I think Scott had a hard time allowing himself to fall into the fantasy of this movie. Considering that I am a father of two sons, I have a distinct advantage in watching these types of movies. My seven year old and I watched this movie and found it entertaining enough. Scott points out all of the unoriginal plot points. Those very plot points are original to my seven year old. I watched this movie and was drawn into it by my son's enthusiasm. So the next time you watch a movie like Bulletproof Monk, take a child with you.

Bulletproof Monk is a bad movie in that none of the characters make sense. A monk on the run from a 90 year old Nazi. A 20 something thief, who knows karate from watching lots of Kung Fu movies. A rich, mafia princess who likes to hang out with street thugs. Who wrote this crap?

There is no connection or repartee between Chow and Seann. Seann is much better matched in The Roundup with The Rock. At least in that movie both leads have a personality.

I am grateful that my son was with me when I watched this movie. His occasional distractions kept me from thinking about the money I wasted on renting it. Without him I am sure I would have hated it as much as Scott.