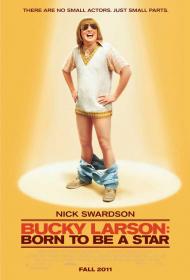 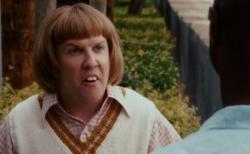 The plot tells the story of Bucky Larson, a mentally retarded "young" man from Iowa who discovers that his parents were porn stars in the 1970s. He sees this as a sign of his destiny and immediately heads to Los Angeles to follow in their footsteps. One of his many problems is that he has a microscopic penis. It's so small that it can fit inside a drinking straw. However, when a clip of him appears online it becomes a hit because men aren't threatened by him and women see him and become grateful for the size of their men's penis because no matter how small it is, it's bigger than Bucky's. Bucky also meets Kathy (a slumming it Christina Ricci), a waitress, who becomes his girlfriend despite his lack of mental abilities, his page boy haircut, his enormous teeth and his tiny penis.

I can only assume this movie won't be a hit in Iowa since the residents of Bucky's hometown are all depicted as idiots. The opening scene shows a montage of his town including a man applying peanut butter to his genitals so that his goats will lick it off. There's a running "joke" throughout the movie about Bucky's Midwest accent. Earlier I described Bucky as retarded, but according to this movie that's just what people from Iowa are like.

I don't believe anyone could play this part and make it worth watching, but Swarsdon brings nothing special to Bucky. He gets a co-writing credit. Or should that be co-writing blame? Here's one person who wasn't born to be a star.

Christina Ricci is superior to the material in the part of the girlfriend with the unfunny dream of becoming a great waitress. Just why she would be attracted to Bucky is best left unasked. He's nice to her when everyone else is mean, but why she would want to date him, let alone sleep with him, is never explained.

If you're considering seeing this movie, do yourself a favor and take the money you were going to spend on it and wipe your ass with it instead. It will have been put to a better use that way.

Nick Swarsdon, Tyler Spindel and Don Johnson in Bucky Larson: Born to Be a Star

Nick Swarsdon once said that, “Comedy is so subjective, you know what I mean? To sit there and technically pick it apart is so stupid.” Some people think Bucky spitting through his teeth as he tries to whistle is funny while others do not? Some may think a leather dressed mannequin yelling, “Fart in my mouth.” is hilarious while others may find it disgusting. Well how subjective is this? Bucky Larson: Born to Be a Star never even came close to making back its 10 million dollar budget in its theatrical release. On IMDB’s rating scale of 1-10, Bucky Larson is a 3. On Rotten Tomatoes it has a 0 fresh score.

Penis and teeth size jokes are not enough to base an entire film plot on. The first problem being that Bucky does indeed act like he is mentally challenged. As Scott noted, the only reason given is that he is from Iowa. Apparently, Swarsdon has something against the good folk of that state. According to him, they have a horrible sense of humor, “If you want to be a comedian, go out. Do a week in Des Moines, Iowa. Try to make those people laugh.” I thought he said comedy was subjective? 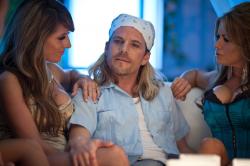 Stephen Dorff as Dick Shadow in Bucky Larson: Born to Be a Star.

Bucky Larson: Born to Be a Star is like the perfect storm of shitty movie making. Not only was it a huge box office flop with 0 fresh reviews at Rotten Tomatoes, it also earned the following six Razzie Award nominations: Worst Picture, Worst Director, Worst Actor (Nick Swardson), Worst Screenplay, Worst Screen Ensemble, and Worst Prequel, Remake, Rip-off or Sequel.

Ironically, it lost in all six categories to another movie featuring Nick Swardson when Jack and Jill made Hollywood history by becoming the first movie ever to sweep the Razzies. After watching this odiously misguided and ineptly crafted piece of cinematic crap all I can say is those Razzie voters got it wrong (to be honest, I haven't seen Jack and Jill but I can't imagine it being worse than this movie).

But seriously, this has to be one of the worst "comedies" I've ever had the misfortune to sit through. As a Happy Madison production it features the two worst elements found in most Adam Sandler movies; juvenile/gross-out humor and sappy storytelling. Christina Ricci's character's attraction to Bucky is supposed to represent her looking beyond the superficial and discovering the sweet guy beneath the surface. But instead it comes across as if she has some kind of weird fetish for mentally challenged, disgustingly unattractive men with tiny genitalia. In a word, EEEWWW!