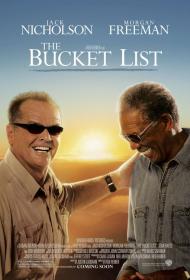 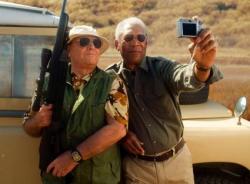 Morgan Freeman plays Carter Chambers, a mechanic who seems to possess an infinite knowledge of trivia. He's bitter about how his life didn't turn out the way he wanted it to, since he sacrificed his wants for his family. Nicholson plays Edward Cole. He's fabulously successful and rich, but is estranged from his only daughter and has been married several times. Both of them are dying of cancer.

Through a contrived plot point, the two of them end up sharing a hospital room. And I have to say this. If I'm ever dying of cancer in a hospital room, I want to share that room with a multi-millionaire who has the means to grant all of my dying wishes, which is what happens here. Carter and Edward makeup a "Bucket List", which is a list of all the things they want to accomplish before they die. Carter's are more of the spiritual variety; ie see something truly majestic, while Edward's are more about traveling the world and having a good time. In any case, when both of their cancer's are at the point where they're well enough to travel, they set out in Edward's private jet and set off on a trip around the world.

As is shown in the previews, one of the things they do is go sky-diving. The CGI here is truly horrible. You can tell that they gumped Nicholson's and Freeman's faces onto somebody else's body. Surely, with today's technology, they could have made it look better. And the bad CGI doesn't stop there. The leads obviously never left the US while making this movie. They're gumped onto the pyramids, and many other exotic places around the world, none of which does it ever look believably that they're actually there.

You can probably predict how this movie will end, so I won't spoil anything if I tell you that each of the two men learn something about themselves from the other person. One rich but without family, one poor but with family; anyone who's seen It's a Wonderful Life can probably guess where this movie is headed.

Freeman and Nicholson are both good in the leads. They're both likable and good actors, but are mainly wasted here.

So this movie does have a limited feel-good appeal, but as to whether or not it's worth the $30 to $40 it will cost you to see it, I don't think it is. Maybe, the couple of bucks it will cost you to rent it or watch it on-demand, but that's about it. 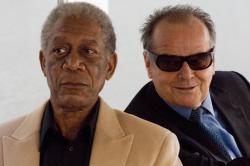 Morgan Freeman and Jack Nicholson in The Bucket List.

The one and only reason for watching this movie, or for its getting made in the first place, is to see the two titans at work. Nicholson and Freeman are both icons and they both bring strongly identifiable personality traits to any role. Neither one treads any new ground here, they are simply playing distilled versions of their most famous characters. Nicholson is a loud-mouthed hedonist and Freeman wise and noble. And though both men are great at what they do they could easily play these parts in their sleep.

The script is completely by the numbers. It isn't bad but it lacks any real inspiration. It boils down to this. If you are a fan of either male star (and really, who isn't?) then this is an enjoyable little movie. Ultimately though this Bucket won't make any list of either star's best movies. 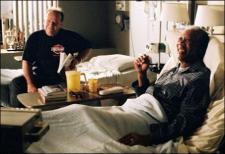 My brothers are right. This is a completely generic film. The plot is predictable. The ending is as obvious as they come. If this film did not star Nicholson and Freeman, no one would care about it. Of course without those two, it never would have been made in the first place, which begs the question why make it at all? They each play their stock characters and never is there a moment of surprise or clarity.

In fact, the plot is quite similar to the much better film Hawks, (1988) with Timothy Dalton and Anthony Edwards. They play two terminally ill cancer patients, who meet in a cancer ward, break out of their London hospital and head to a Holland bordello for a last hurrah. It is much more realistic, funny and gripping.

The Bucket List tries to dispense some laughs, as well as wisdom. Freeman says at one point that, “You measure yourself by the people who measure themselves by you.” While Nicholson offers up this gem, “Never pass up a bathroom, never waste a hard-on, and never trust a fart.” Even though I cannot think of any two actors who could have spoken those lines better, they still do not raise this movie above a disease of the week television drama.