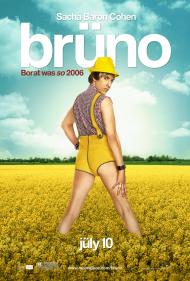 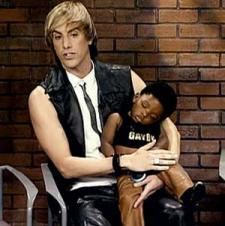 Like Borat, Brüno is based on a character previously featured on “Da Ali G Show” by the fearless comic Sacha Baron Cohen. Also Like Borat, much of Brüno’s humor is derived from shock value and a sense of guerilla filmmaking. Although this one has a slightly more cohesive storyline and appears to be more scripted than that earlier movie.

Brüno is the flamboyant host of a television fashion show in Germany. He lives happily with his pygmy lover. When he gets fired from his job and dumped by his boyfriend he sets off for L.A. to become a superstar. Once in Los Angeles he tries his hand at various ways of becoming famous. Some of them are funnier than others.

Whether screening a TV pilot that includes a close-up of a swinging penis, or going on a talk show with his newly adopted African baby named OJ, or talking to a rather effeminate minister who specializes in converting gay men straight, or hanging out with a group of swingers at a sex party while everyone around him is screwing, or getting in a cage fight in front of a rowdy crowd only to begin making out with his opponent, Brüno tries hard to shock its audience. I found much of it mirth inducing but can honestly say I didn’t find any of it to be shocking. Anyone that has seen Borat will know what to expect.

The line that I laughed the hardest at was when Brüno goes on a camping, hunting trip with three straight good-old-boys. As they are sitting around a fire at night, Brüno says something about them being like a new version of Sex and the City and he asks them which one each of them would be. One of the guys responds that he “ain’t nothing like them Sex and the City gals”. Without missing a beat Brüno responds, “That’s such a Samantha thing to say.”

Yes Brüno has some hilarious moments. Unfortunately it also has a been-there done-that feel to it. It is time for Sacha Baron Cohen to figure out a different angle. 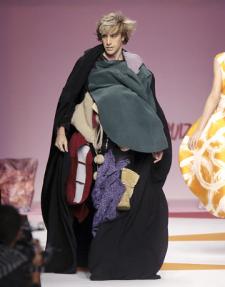 Cohen tries to shock the audience, but those jokes are not really funny. The biggest laughs come from other people in the film reacting to his antics. When Bruno comments that all of the stars in the sky remind him of hot guys, the hunters just sit quietly in awkward silence. The audience I saw this film was laughing loudest when the fight audience reacts to Bruno making out with Lutz. My personal favorite moment was his interview with Harrison Ford.

Bruno is good for a few laughs. Considering that this film clocks in at just under 90 minutes, it seems that Cohen ran out of legitimate jokes, and simply padded the film with some scenes intended to be shocking. The scene where he tries to seduce Ron Paul is neither funny or shocking. The most notable thing about it, is that Ron Paul must have some sort of sense of humor to allow Cohen to use the scene in his film.

I'd say Bruno has some funny moments, but I wouldn't go so far as to say hilarious.

Like you Eric, I found the reaction to Bruno to be funnier than Bruno himself. My favorite line is by the man who thinks he's going to marry Bruno to his bride. When he protests to Bruno that he can't legally marry a man, Bruno denies it's a man (despite it quite obviously being one) by saying that this must be a woman because it gave birth to his son. The man replies, “When did you give birth?” and then pauses a beat before saying, “Why am I even asking that question?” It's funny and it rather sums up the entire film because you get the sense that everyone in the movie who is caught up in Bruno's world is thinking that same thing.

I agree Patrick that Bruno feels more scripted and controlled than Borat did. I kept wondering how they makers of the film explained away the presence of the cameras. In the hotel room scene, for instance, when the hotel employee walks in on Bruno and his assistant chained together, he must have wondered who the cameraman was and why he didn't just unlock the couple.

Often the jokes feel as if the filmmakers are just trying too hard. They're trying to top themselves from Borat and never quite making it.

Sacha Baron Cohen is clearly a fearless performer and can be quite funny, but this shock schtick is getting quite old indeed. It is most definitely time he moved on to other things.