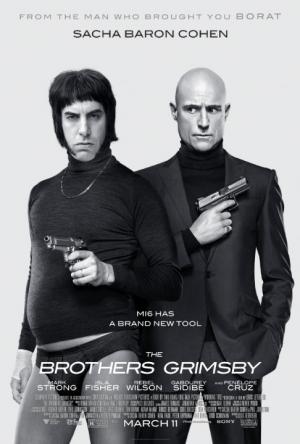 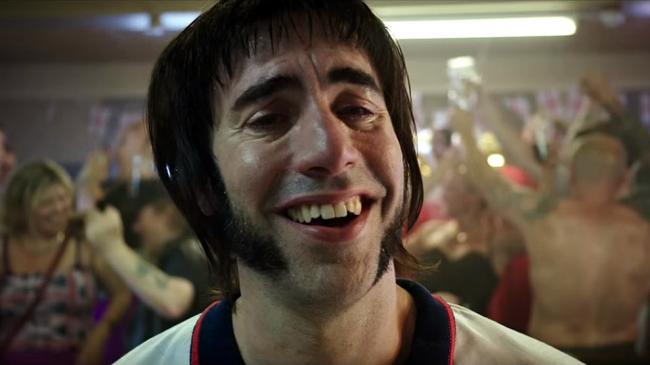 Sacha Baron Cohen has proven that he can be funny, but he's yet to prove that he can make a good movie. The Brothers Grimsby, for which he both co-wrote and stars, is a great example of this. There are a few genuinely funny moments and with Nobby, he's created another memorable character, but it takes more than a single character to make a good movie. Cohen seems more suited to sketch comedy than full length films, at least in the ones he writes himself.

Cohen plays the aforementioned Nobby, a football hooligan from the English town of Grimsby. Despite his repulsive personal habits, Nobby is intensely loyal to his family, which includes his wife, played by Rebel Wilson, and their many children. It also extends to Sebastian, his younger brother, who he hasn't seen since he was adopted by a wealthy family from London. When Nobby hears from a friend that his brother has been spotted in London, he runs to be by his side only to discover that Sebastian (Mark Strong) is actually a secret agent on an important mission to prevent an act of terrorism.

The film runs just an hour and twenty-five minutes, but even at that relatively short running time feels stretched. Cohen never knows when to stop a joke, pushing it as far as it should go and then pushing it even further, much like the elephant penises being pushed into the elephant vagina within which Nobby and Sebastian hide at one point in the story. Yes, that really happens in this movie. And when that's not enough, it turns into a long line of elephants doing the same thing. The audience is slapped repeatedly in the face, much in the same way that Nobby is slapped in the face by Sebastian's testicles when Nobby is forced to suck poison from them. And no, it's not hinted or insinuated that Nobby is being hit, we are shown explicitly, over and over again Sebastian's nuts touching Nobby's face. Moments like this rely strictly on their shock value to elicit laughs and shock humor works best in small doses. The longer you extend the scene the weaker the joke becomes.

Rather surprisingly the film is directed by Louis Leterrier, best known for his action films like the first two Transporter films and Edward Norton's The Incredible Hulk. His experience brings a slight edge to the action. Mark Strong makes a believable spy and some of the gun battles and fist fights are filmed almost straight. That is until Cohen runs into the scene with gun and mouth blazing.

Despite the presence of other comedians in the film, including British comics Johnny Vegas and Ricky Tomlinson in small parts, and even Cohen's real life wife Isla Fisher, Cohen keeps almost all of the jokes to himself. This isn't an ensemble comedy, it's the Sacha Bron Cohen show.

To be fair, this isn't a completely unfunny film. Cohen's brand of non-PC humor can and does elicit some laughs. His best joke involves a dig at the Fast and Furious franchise. It's just that instead of making the joke and then moving onto another, Cohen milks too many of them for more than they're worth. Much in the way he milks that elephant's penis. 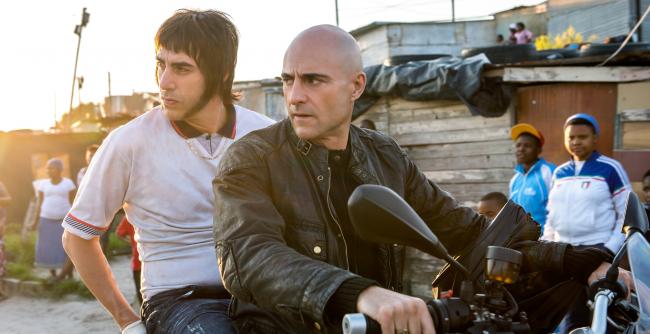 Sacha Baron Cohen and Mark Strong in The Brothers Grimsby.

Scott hit the nail on the head when he wrote that Sacha Baron Cohen doesn't seem to know when to end a gag. The elephant gang-bang being the most obvious example but it happens other times too. This really is like a sketch stretched out to a paper-thin length. I agree that Nobby and Sebastian are likable, interesting characters but the script too often devolves into a series of physical gags involving male genitalia and butt-holes.

Sure it has a few genuine laughs but this could have been quite a good movie given a better written script and someone to keep the star's tendency to be self-indulgent in check. In this regard, Sacha Baron Cohen reminds me a bit of Jerry Lewis later in his career when he didn't always know when to end a scene or what to leave on the cutting room floor.

On a positive note it's nice to see that someone is willing to hire actors like Gabourey Sidibe (Precious) and Barkhad "I'm the captain now" Abdi. Even if they are playing stereotypes at least they're working. Especially in an industry that doesn't always know what to do with actors that look like they do.

It certainly had potential but as is The Brothers Grimsby is a pointless exercise in crude seventh-grade locker-room humor. Don't waste your time. 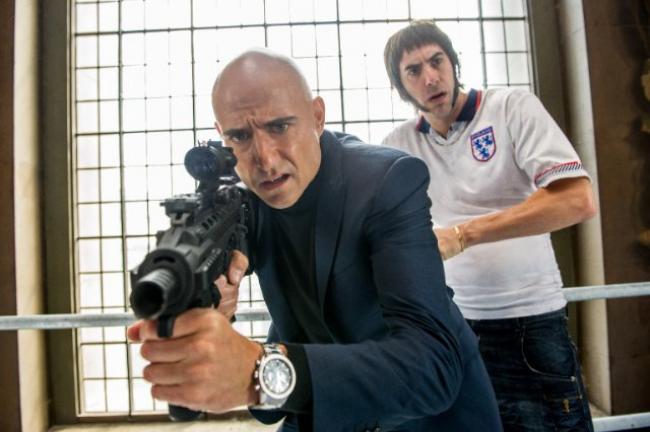 Mark Strong and Sacha Baron Cohen in The Brothers Grimsby

Clearly The Brothers Grimsby was not my brothers cup of tea(bag). I found that scene to be hilarious. It was a true test of brotherly love. It pokes fun at an awkward situation between two straight men. Yes, this movie thrives on shock humor but what's wrong with that. Look no further than the opening scene.

There are plenty of sincere jokes here. I loved The Fast and Furious one, that Scott mentioned. I laughed when Nobby states who he thinks is, "...the biggest crime syndicate in the world." Sure, most of the jokes come out of left field and are meant to shock, such as Nobby stating, "Ooh, I'm getting stiffer than a pedophile at Legoland." but why is a shocking joke a bad thing. I laughed at the elephant gang bang. Come on guys, if you can find your inner child to enjoy an animated children's cartoon why not your inner teenager.

What helped sell this movie to me was that Nobby is extremely loyal and loving to his family, as disgusting as they all are. I was reminded of an old Monty Python skit. "YOU WERE SNOGGING ON THE COUCH LAST NIGHT!" Anyway, the terrorist's plans are to kill off the worlds leeches. you know, those people who live on government assistance and contribute nothing to the country but a vote for a liberal. I laughed when Nobby tries to inform his friends of this, " She's gonna release this deadly virus, and it's gonna kill poor people like us, because she thinks that we are scum." One of Nobby's friends says, "Bloody hell, Nobby, we are scum."

There is a pleasant addition of a heartfelt moment. In a flashback scene, we see just how much Nobby loved Sebastian. There is also a brief scene of Sebastian looking fondly in at his old childhood bedroom, that Nobby has not changed since he was adopted. However, as my brothers wrote, Sacha Baron Cohen rarely let the story stray from Nobby. As funny as Nobby sometimes is, the plot needed to be better grounded by giving more screen time to Sebastian.

There should have been a scene of Sebastian after having sex where he cries to the girl about her leaving without even a cuddle or a post coitus conversation. It would demonstrate that he is lonely and that Nobby actually has something (a family) that Sebastian desperately wants. It would have made Sebastian a more rounded character as well as given Mark Strong a scene to be funny in. Alas, all he was left with was setting up Cohen and others for jokes. When he meets Nobby's wife (Rebel Wilson), Strong says, "Congratulations, by the way. When are you due?" Wilson then delivers the punchline, "Oh, I'm not pregnant. I'm just fucking fat."

The Brothers Grimsby is not a great film. It is crude and not everything seems completely thought out. The tracker implanted scene is the most obvious foreshadowing I have ever seen. Still, for all of its flaws and all of the missed possibilities, I still laughed enough to at least reward it with two and a half stars.