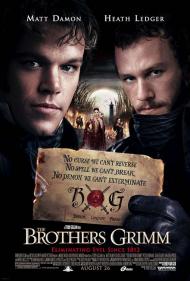 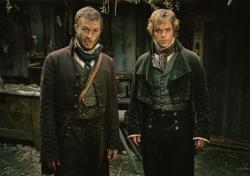 There aren't that many movies that I will rush out to see because of who directed them. Terry Gilliam, however, is a director that I know I will see everything he puts out. His work though, has always been about quality instead of quantity and so there are often many years between his films. In fact, it has been seven years since his last film, Fear and Loathing in Las Vegas, was released. I'd like to say that The Brothers Grimm was worth the wait, but unfortunately, despite being lightly entertaining, it hardly lives up to some of his earlier movies.

Matt Damon and Heath Ledger star as Will and Jacob Grimm of Grimm's Fairytales fame. Only in this movie they are the nineteenth century equivalent of the Ghostbusters, only instead of really hunting ghosts, they are frauds who con small villages by pretending to rid them of evil spirits, when actually it is their assistants who are pulling a Scooby-doo by pretending to be ghosts. All is well and good for the brothers until they are captured by Napoleon's army and sent to investigate the disappearance of several girls from a nearby village. To their horror, they discover that perhaps there really is magic in the world and it's up to them to cope with it.

Like Tim Burton, Gilliam's films are always high on production values. He has a great visual sense and no matter which movie of his you watch, you are certain to see plenty to please the eye. While the same is true here, the movie is hurt by the forest where most of the action takes place being entirely built on a soundstage. The rest of the film is shot on location, yet every time they enter the forest it is very clear that they are on a set. This certainly gives a director more control, but it seems false. For the first time, the Brothers Grimm are faced with real magic and spirits and yet it happens in the most artificial location in the movie.

As the brothers, Ledger and Damon spar nicely off each other, even though it seems as if their roles should have been reversed. Ledger is the bookish brother who writes of their adventures and wants to believe in magic, while Damon is the ladies man quite content to continue life as they have been, and hopefully end up rich along the way. The brightest moments in the movie come when the two of them are bantering back and forth.

Occasionally there are references in the story to the actual fairytales that the brothers wrote, but not enough of them. Great fun could have been had poking fun at some of the stories we all know so well, but instead it seems that they are just thrown in for a quick recognition rather than having some fun with them.

This is the first Gilliam film that I've ever seen where I've ended up thinking that he was the wrong director for the job. More time should have been spent on the dialogue and character interaction rather than the visual look. At times it's a comedy, but it's not enough of one. Nor is it tense enough to be truly suspenseful. Instead it falls somewhere in the middle and that's somewhere that no Gilliam film ever deserves to be. 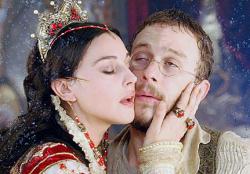 That is exactly the problem. It works as a simple fairy tale, but fails as a comedy. I laughed whenever the brothers screamed like girls but most of the dialogue falls flat. The most memorable line in the entire movie is, "And a fine wife he'll make some lucky man." Damon says referring to a girl who is dressed as a boy.

Not only is it stuck between a comedy and an adventure story, it like wise does not know what rating to be. No one swears the entire movie. The violence and gore is at a minimum and there are no nude scenes. A solid PG rating. However, it has Matt Damon sleeping in a bed with a girl under each arm. There is a quick scene of two decapitated heads. The movie is very appropriate for children, although a horse swallowing a little girl may be a bit scary for younger ones. (The girl lives)

If the movie is meant for children then why add the adult subjects? If the movie is meant for adults then take those mature scenes farther. More than likely he was attempting to appeal to adults and children alike. Only two types of films can appeal to children and adults, comedies and action movies. As Scott wrote, it's not funny enough to be a comedy or suspenseful enough to be taken seriously. The Brothers Grimm is a nicely filmed (the forest set was not a problem for me), yet utterly unremarkable, movie. 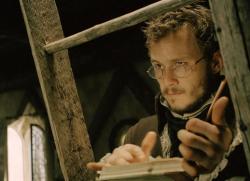 Terry Gilliam directing a movie about the Brothers Grimm starring Matt Damon and Heath Ledger. On paper that looks like a great idea. Unfortunately my brothers are right. The end result is a shiny schizophrenic bauble that is ultimately pointless.

This movie completely lacks the whimsy and humor of earlier Gilliam movies like Time Bandits and The Adventures of Baron Munchausen. In fact, if I didn't know better I would think this was a Tim Burton movie. It is all surface with nothing underneath.

The way that Heath Ledger never fails to physically inhabit every character he plays is impressive. It is a joy to watch his career unfold. Matt Damon is fine but Ledger outshines him here.

As Oliver Stone and Woody Allen can surely attest, every great filmmaker has their career low points. As such The Brothers Grimm could have been much worse.