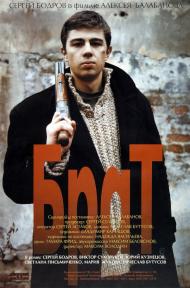 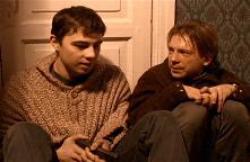 Danila and a nervous hostage.


Brother (Brat) was a huge hit in Russia, making Sergey Bodrov one of the most popular celebrities in Russia.  The Russian newspaper Pravda wrote, "Putin is our president, Sergei Bodrov is our brother."  The New York Times wrote of it, "With its twin themes of enduring loyalty and vigilante justice, "Brother" became a sensation in a nation weary of the every-man-for-himself mantra of post-Soviet Russia."

The story takes place in a dreary 1990s Russia where crime and poverty are common.  The movie touches on the disassociated Russian youth, and broken families.  This movie depicts the after math of the collapse of the Soviet Union, and post Afghanistan war, as an unfriendly depressing place run by strict cops and cruel mobsters.

Into this gloomy setting comes Danila,   He is loner, recently out of the military and has no ambition.  His greatest joy is music.  He never leaves home without his cd Walkman.  After a brief run in with the law he decides to move to Leningrad, recently renamed St Petersburg, to see his brother.

His brother is a member of a mob.  Just after arriving, he talks Danila into doing a hit for him.  Even though he does it, Danila remains a moral compass in a film filled with immoral characters.  He befriends a German street vendor.  He starts an affair with an older woman who is being abused by her husband.

Even as he kills people, Danila makes it clear he understands right and wrong.  He has a sense of honor about him.  In one scene he waits in an apartment with two other hoods to assassinate a man when he returns.  An innocent bystander gets pulled into the room by mistake.  Frightened out of his mind, Danila tells him he will not be hurt.  He sits in terror not knowing his fate, while Danila casually asks him questions about music.

The character of Danila made a strong connection with it's Russian audience.  Perhaps his sense of  "loyalty and vigilante justice" was a fresh air to them.   Perhaps it was his politics?  While on a tram, two Chechens refuse to pay the fare.  Holding his gun for them to see, Danila tells them to, "Pay the fine!"  One Chechen pleads, "Brother! Please don't kill me, bro! Take my money, take everything, just don't kill me!"  Danila responds, "You're not my brother, black-assed scum!"  The War in Chechnya was very fresh in everyones mind.

I saw him as a very cool character, reminiscent of James Dean and Steve McQueen.  He carries himself in a way that says there is more to him than meets the eye.  In fact, Danila tells everyone he spent his time in the military in HQ, as if he did nothing, yet he is twice shown making his own weapons.

The final mark of Danila's greatness is when he saves his brother.  His weeping brother confesses he betrayed him.  Danila quietly responds that he knows, but he is still his brother.  Danila is a noble and forgiving person.  You do not have to be Russian to appreciate his qualities.