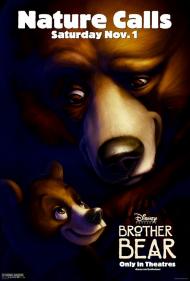 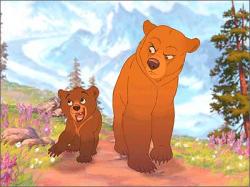 People have written articles about the demise of Disney due to Pixar's exit. The people at Disney can still make great movies without them. They just need to get off the political agenda and remember their target audience. Brother Bear could have been a decent movie, if only the makers spent more time on jokes and characters and less on making a point about the environment.

Speaking of politics. Disney has not touched a movie that contains Christianity in years. Yet, this film is filled with ancient mysticism and spirituality that involves believing in spirits that can change forms. The first 24 minutes of this film confused one of my sons and bored the other. He got up and walked away to play by himself.

Disney's agenda extends beyond religion. This films message is straight out of a PETA pamphlet. After the native boy turns into a bear, he makes friends with a cub. They have a conversation about why men attack them. The bear that was once a man responds by saying it is because bears are mean. At no point in the film is it ever explained that humans, in those days, killed bears and other animals to stay alive. They ate bears and used their fur as clothing. This movie would have you believe that men killed bear out of revenge or for sport only.

Later in the movie, the man/bear comes across a society of bears. They laugh, tell jokes and most importantly, have feelings. Okay Disney, enough is enough! I get it. You are run by a bunch of liberals who feel you have to spread your views onto the public. Perhaps this is why you have not had a successful movie in years. You are too busy pushing your agenda instead of just making an entertaining film. They are just bears. Get over yourselves!

The two moose were moderately funny. My sons laughed once at them. The only other good thing I can say about this movie is that the animation is top notch. Again, the type of animation does not make a movie great; it is the story and plot. Of which, this movie lacks.

Brother Bear is a film for animal advocates. It is so obnoxious that I will spoil the ending. The guy decides to stay a bear to take care of a cub whose mother he killed. There is a whole society of bears a mile away, but he chooses to give up his human life to be with this cub, which will grow up in a year and run off. Bears are not very tribal. Tree huggers will like this movie. I am not sure who else will.