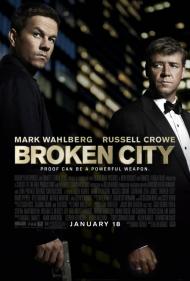 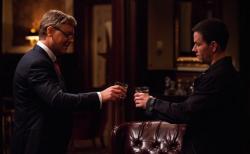 January is the well known dumping month for movies not expected to be received very well. Serious moviegoers are busy catching up on award nominated fare while the box office is still dominated by the big budget holiday films. That's why a movie like Broken City, starring several Oscar nominated, big name, movie stars, being released in the first month of the year is a bit of a shock. After watching it though, I'm a little less surprised at the choice of release date. It's a movie not dramatic enough for a fall release, nor exciting enough for a summer one. It's merely a weak attempt at the hard-boiled private eye genre with some famous faces in the cast.

Mark Wahlberg plays Billy Taggart, a former NYPD officer who was involved in the death of a suspected rapist. He was never convicted, but was forced to resign from the force to appease public outrage. Seven years later and he's a private eye hired by NYC Mayor Hostetler to investigate the infidelity of his wife. They Mayor is up for reelection. An election he hopes to win on the strength of the sale of a city owned Public Housing project that has reversed the city's fortunes. When the man Taggart fingers as the Mayor's wife's lover turns up dead, Taggart feels that he's been made a patsy and starts to dig into the Mayor's motives, which, naturally, aren't what they seem.

The cast is the film's greatest strength. Wahlberg will never be the world's greatest actor, but he definitely has presence and this is a part well suited for him. Crowe is equally good as the corrupt Mayor even though he's never really given a chance to let loose. He champs at the bit in a few scenes, but seems restrained by the script. Zeta-Jones, whose career has cooled in recent years, looks good, but isn't given enough to do to really make an impact. Jeffrey Wright brings some weight to the part of the police commissioner supporting the Mayor's opposition.

It's just too bad that the script isn't as strong as the actors. This is a movie that never met a cliche that it didn't like. Admittedly, you expect a few stereotypes in a neo-noir detective story, but this one is almost exclusively made up of elements we've seen before in better written films. It's pretty easy to see where things are going and you can guess how they'll get there. There's an attempt to muddy things and an unnecessary subplot involving Taggart's actress girlfriend, but absolutely nothing in the script should come as a surprise to you.

There's an almost old fashioned feel about this movie. So much so that perhaps the filmmakers should have considered setting it in the past. Perhaps the cliches would have seemed less obtrusive had it taken place in the 1940s or 50s.

Despite the weak story, there are some things to enjoy. Apart from the scenes with the girlfriend, the story moves fairly briskly. Director Allen Hughes has a good eye and he makes good use of the city. This isn't an action movie, but when there is action, it's well executed.

While not a great movie, it's still better than the average January release. With this cast though, it feels like a wasted opportunity. 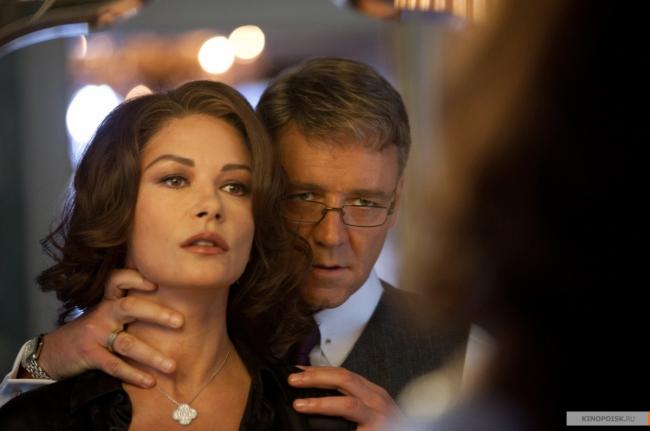 Scott wrote that Broken City has an almost old fashioned feel to it. I get what he means, as it features a private detective with a sassy secretary and it is often filmed in shadows. It could have easily been a 1940s Humphrey Bogart or John Garfield vehicle. In fact, it seems to be working too hard to be an old fashioned detective film set in a modern world.

The characters are all cut and dry. We know who to trust and who not to, nearly as soon as they show up on screen. The politicians are stereotypes. The conservative is for big money business men and his liberal opponent acts idealistic. Both are idiots. The fact that Hollywood made the conservative the bad guy is just one more of many clichés.

The opening scene however, with Billy shooting and killing a young criminal on the street, is a very contemporary subject. Since the making of this movie, police killing people on the street has become an extremely hot topic. I doubt this movie could even be made today without a rewrite of the reason Billy Taggart loses his job. Our reaction to his killing of a young criminal, prior to the real life St Louis shooting of a street criminal by a police officer, may not be the same viewed today.

I have enjoyed many thrillers and mysteries over the years, old and new. I like how they demand you pay attention to stories details. They engage the audience as we attempt to figure things out right along with the hero. That is as long as the story is at all engaging.

I cared not for anyone on screen. Billy is a cold blooded killer. The Mayor and Valiant are politicians. Cathleen is a miserable wife of privilege. Natalie is fake. Etc… With that said, the story never held my interest. It all comes down to back room deals and blackmail. The problem is that nothing really bad happens if the bad guy succeeds. Sure, he gets a bunch of money but a whole lot of people get jobs. The city gets some huge improvements at the cost of some people having to find a new place to live. It is not exactly exciting stuff.

Russell Crowe has made lots of lousy films lately. Noah was a disastrous biblical retelling. Although he sings for his rock band, 30 Odd Foot of Grunts, Les Misérables demonstrated that singing on screen is really not for him. The less said about The Man with the Iron Fists, and his performance, the better. Here, his accent seems to come and go. He lacks the kind of charisma that allows audiences to at least have fun with the audacity of the characters actions. Someone like Kevin Spacey could have done wonders with this part.

I like that someone was willing to attempt an old fashioned film noir type movie but it was unfortunate that Broken City turned out to be so disappointing.