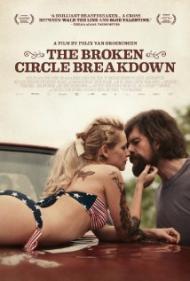 Johan Heldenbergh and Veerle Baetens in The Broken Circle Breakdown.

Broken Circle Breakdown is the type of movie that I normally wouldn't watch. It was only its Academy Award nomination that brought it to my attention. Were it not for that, even if I had stumbled across it, the description would surely have prevented me from watching it, and that would have been a real shame as this well written and very well acted film raises itself far above its Lifetime Movie of the Week premise.

The story is adapted from the stage play written by Johan Heldenbergh who starred on the stage and in this film adaptation as Didier Bontinck. Didier is a bluegrass musician living near Ghent in Belgium. He meets and falls in love with Elise, a tattoo artist, with whom he has a child. Their life is blissfully happy until their daughter is diagnosed with cancer and they must deal with the consequences and the effect it has on their relationship. Such a sad premise may not raise your interest in seeing this film, but personally I went from reluctant viewer to being quite moved by the film's ending.

Elise and Didier's story is told out of order. Scenes jump from year to year. The film begins with their daughter's diagnosis and then jumps back to their first day together. Although this almost feels gimmicky at first, I came to appreciate the technique as the story progressed. Instead of being a happy story for the first half and then a sad one for the conclusion, the moods are intercut which creates an interesting dynamic and more slowly peels back the layers of their relationship.

Both Veerle Baetens and Johan Heldenbergh deliver terrific performances. Veerle won the Best Actress Award at the Tribeca Film Festival for this performance and it's well deserved. This is the kind of role that can make a career and I have a feeling we'll be seeing more of her after this. As Elise she seems wild and strong, but their daughter's condition affects her most strongly and her beliefs begin to clash with Didier who goes in the opposite direction, proclaiming his atheism more strongly as their daughter's illness becomes worse. The two of them argue over their different attitudes and even begin to blame the other. As Elise turns inward, Didier expresses his anger outwardly, blaming everyone, even George W. Bush for his ban on Stem Cell research, even though, as Elise points out, the research is still legal in Belgium.

Accompanying the film is a bluegrass soundtrack, mostly sung by its two leads. I can't say I'm a fan of the genre, but it fits the mood of the film and and both Veerle and Johan have good voices. I should also note that while the film is spoken in Dutch, with English subtitles, the songs are sung in English.

Although it's not tipped to win come Oscar night, this is a far superior film to front-runner The Great Beauty.