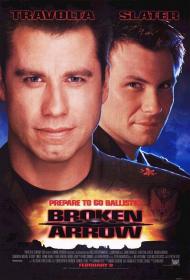 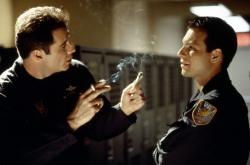 Some movies are bad to the point that I can make fun of them as I watch and thus the movie actually has some entertainment value. This is the case with Broken Arrow. This movie is so poorly put together that the only thing I can possibly do is laugh at it, even when it's supposed to be dramatic or suspenseful, it's funnier than tense.

Travolta and Slater play Air Force pilots. On a practice run, with live nukes, Travolta attempts to shoot Slater in the cockpit and steal the bombs. Slater escapes with his ejector seat and Travolta crashes the plane in the dessert. An Air Force pilot stealing nuclear bombs was already done in Never Say Never Again(1981). That was actually a remake of another James Bond movie Thunderball(1967). To further mimic James Bond, Travolta sends a tape message to the powers that be in Washington demanding 250 million dollars in ransom or boom. Dr Evil does it better.

Unoriginality is hardly this movies only flaw. After landing in the dessert, Slater and Travolta continue to do battle over the bombs. Travolta has a group of lackeys helping him out. One of them is Howie Long. This guy better be glad he got the sports commentator job because he is as bad an actor as Cindy Crawford. Sorry Howie, I know that's a rough statement, but you know it's true. Slater gets help in the form of a hot chick park ranger. I wonder what she does all day in a place where there is little life of activity. Anyway, when she first sees Slater walking in the desert, in military uniform, she pulls out her gun and attempts to arrest him? No normal person would have reacted that way but I guess she was probably just bored and needed something to do.

Nothing in this movie makes any sense. In one action scene, Slater jumps into a moving train car to surprise and attack Travolta and Long. He yells "Incoming!" as he swings on a rope into the car. So much for his surprise. The dialogue through out this movie is bad. During a shoot out in a cave, Travolta tells on of his minions, "How many times do I have to say it? Please don't shoot the nuclear weapons." Near the end of the movie, after Travolta tried to kill Slater many, many times and blew up a nuclear bomb, Slater makes the brilliant deduction that, "You're out of your mind!" To which Travolta responds, "Ain't it cool?"

The worst plot device in the entire movie is a 20 dollar bill that gets passed back and forth between Slater and Travolta. The first scene in the movie is a boxing match between the two stars. Slater loses and thus owes Travolta the 20 dollar bet. So at the end of the movie Slater and Travolta find themselves staring at each other on a moving cattle car. Between them is a nuclear bomb in which Travolta holds the detonation device. In true retarded villain fashion, Travolta explains how the device works. Slater only has to beat him in a fight to get it. Actually he did not need to explain how it works because after Slater gets the device the two buttons are clearly marked "DISARM" and "DETONATE". Anyway, after the bomb goes off, Slater finds the burning remains of that 20 dollar bill.

Sometimes I watch movies and wonder why I am not a screen writer. With such unoriginal crap as this being made into movies I know I could write something better. Hell, almost anyone could.