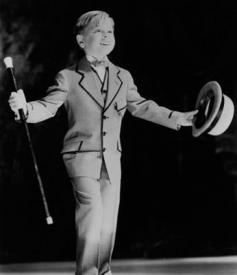 Mickey Rooney in his first movie at MGM.

Broadway to Hollywood is a fairly obscure pre-code backstage musical from MGM in 1933. It covers three generations in the lives of a family of vaudevillians, from the late 1880’s to the late 1920’s. None of the musical numbers are all that memorable although to audiences of the day they must have been nostalgic. The most famous scene in the movie is a 12-year-old Mickey Rooney doing an incredibly energetic tap dance. This scene was featured in MGM’s hugely popular film retrospective That’s Entertainment! This was Mickey’s first movie at Metro and as he says when introducing the clip, “I was raring to go.” Boy was he.

Frank Morgan (6 years before playing the Wizard of Oz) and Alice Brady are the Two Hackett’s, a married song and dance act playing the theater circuit. Their son joins the act as a young boy. Jackie Cooper plays him as a child. Mickey Rooney plays the grown-up Jackie Cooper’s son. Although in real life Rooney is two years older than Cooper I can just picture Mickey jokingly calling him “pop” around the studio. Cooper was then at the height of his success but within a few years his star would wane and Mickey would become the biggest movie star in the world.

All the men in the Hackett family are hopeless womanizers. In one scene, that would probably not have gotten past the censors a few years later, Frank Morgan walks up to his wife and their now grown-up son and asks “who was that?” referring to a woman who had just walked past. His wife nonchalantly replies, “Oh just a pretty girl, but your son saw her first.” While she takes her husband's indiscretions in stride their son’s wife is not so easily placated. In fact his philandering leads to her death in the most shocking scene in the movie.

Besides Rooney several other future stars have cameos. Jimmy Durante gets a solo number, an uncredited Nelson Eddy sings a few lines from a song, and Moe and Curly Howard of the Three Stooges are unrecognizable in clown make-up during a rather surreal number with the grown-up Jackie Cooper character.

As the title suggests the final act takes place in Hollywood where the now grown-up grandson (the Mickey Rooney character) has become a movie star just as the pictures have learned to talk. He’s a wild young man on the verge of self destructing. Can his aging grandparents set him straight before it is too late? You’ll have to watch the movie to find out. Sure it’s dated and a bit overcooked, but Broadway to Hollywood remains an enjoyable cinematic relic.