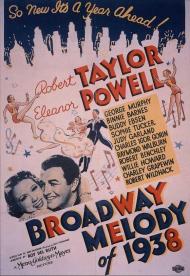 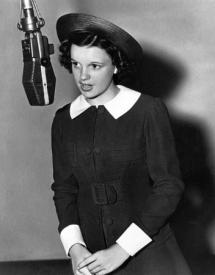 Broadway Melody of 1938 has something for everyone, great songs, energetic dance numbers, horse-racing, ambitious Broadway producers, wide-eyed ingénue's, old-time Vaudeville troupers, a breezy baritone, tap dancers, young hucksters and even a sneeze expert. Apparently MGM didn't want to leave anyone or anything out of this musical extravaganza.

Steve Raleigh (Robert Taylor) yearns to produce a show on Broadway. He manages to secure a backer and a star-struck leading lady, Sally Lee (Eleanor Powell). But problems arise when the backer's wife insists on a proven star instead of the newcomer. The cliché ridden plot also involves a horse that Sally purchases (she used to train the animal on her parents farm before the depression), and with two ex-vaudevillians, Sonny Ledford (George Murphy) and Peter Trot (Buddy Ebsen) she trains it to win a race, therefore providing the money Steve needs for his show.

The story also contains several subplots. One involves a young singer named Betty Clayton (Judy Garland) and her stage mother and former Broadway star Alice Clayton (Sophie Tucker). Garland gets a few good numbers, most famously her ode to the King of Hollywood. “Dear Mr. Gable, I am writing this to you, and I hope that you will read it so you'll know…" Sophie Tucker does a nostalgic version of her classic 'Some of these Days' proving why she was known as 'The Last of the Red Hot Mama's'. And yet another subplot involves a promising young Italian opera singer and his stereotypically Italian uncle.

Musicals were evolving during the nineteen-thirties and MGM was leading the way. Technicolor hadn't yet become common, but a recent innovation was that musical numbers no longer had to make sense story-wise. Now a character was free to break into song or start dancing anytime and anyplace. 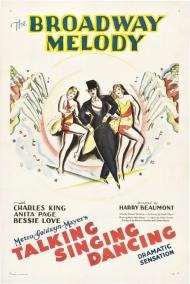