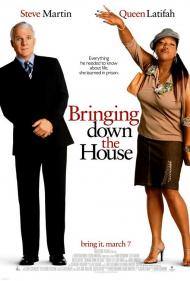 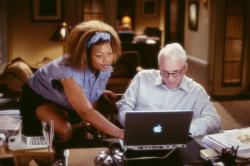 Queen Latifah and Steve Martin in Bringing Down the House.

I laughed my ass off during this movie. Sure the plot is predictable, and in less talented hands could have easily been a disaster. But Steve Martin and Queen Latifah pull it off beautifully. Of course it helps that they are surrounded by the funniest supporting cast I've seen in years. Eugene Levy, Joan Plowright, Betty White and Missi Pyle are all outstanding.

Martin plays a wealthy divorced attorney who meets what he thinks is a pretty blond attorney in an Internet chat room. They arrange a date and he is taken by complete surprise when a ghetto mama rings his doorbell. She has busted out of prison and needs his help in proving her innocence. He at first refuses to help her but eventually they form a bond and end up teaching each other valuable life lessons.

The hilarious situations just keep coming. I will only mention three. Queen Latifah and Missi Pyle get into a brutally hilarious fight in the ladies room of an exclusive country club. In another scene Latifah tries to teach Martin how to be more sexually aggressive and they wind up getting caught in a compromising situation by little-old-lady neighbor Betty White. Upon seeing them she immediately shouts, "Mandingo." The third one is when Joan Plowright starts singing an old Negro spiritual at the dinner table. There are many other laugh out loud moments that I won't give away.

Bringing Down the House is not politically correct. It is an equal opportunity offender with funny stereotypes to go around for everyone. How refreshing. 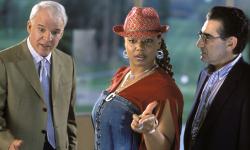 Steve Martin, Queen Latifah and Eugene Levy in Bringing Down the House.

Bringing Down The House is a completely unoriginal film. It displays more stereotypes than a Democratic convention. This movie offended and bored me at the same time.

Queen Latifah's character is an outspoken black who shakes things up for some tight ass white folks. This plot is also old news. Sydney Poitier shook up some white people in Lilies of the Field. Denzel Washington shook up some white folks in Carbon Copy. Eddy Murphy sure added life to those tight ass white policemen in Beverly Hills Cop. Whoopi Goldberg sure shook up those repressed nuns in Sister Act. Besides the tired plot this movie is an insult to white people. Other than Eugene Levy, every white character in this movie is a tight ass nervous bore. There are 5 white female characters in this movie. Three of which are obnoxiously bigots. They do rude, outdated things like sing a slave song and automatically assume she is a maid or nanny just because she is black.

However, all the black people in this movie are hip and tough. Queen Latifah's character is supposedly brilliant yet chooses to talk street because she wants to. She is so smart in fact that her boyfriend is a gun toting drug dealer. Not only is she an intellect, but she is a great cook, educator and schooled in law. Her character made no sense.

Besides all the clichés and stereotypes, this movie failed in the worst way in that it is an unfunny comedy. I chuckled once when the gold digging sister was spoon feeding her 'old as dirt' date. The audience, which ranged from teen to senior citizen, laughed twice; once when Martin and Latifah were caught in an uncompromising position and again at the end when Martin does his wannabe-black routine

If you honestly laughed your ass off Patrick then you have an entirely different definition of humor than do I. You particularly liked the fight scene between the two women. What was funny about that? "For a skinny white bitch your pretty tough." Queen Latifah yelled in that scene. Someone stop me. I am laughing so hard I might hurt myself.

This movie has two good stars, who do okay work in a very unoriginal, average movie. It is more offensive than it is funny. 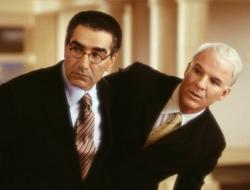 Eugene Levy and Queen Latifah in Bringing Down the House.

As Patrick said at the beginning of his review, while the plot to this movie might not be wholly original, it is quite funny at times. Not only the scenes he mentioned, but any scene with Eugene Levy, one of the squarest actors in Hollywood, trying to talk hip. Levy is one of those rare actors who can make a scene funnier just by appearing in it. And yes, I found the fight scene between Queen Latifah and Missi to be funny as well. Missi's Tai-Bo fighting technique was definitely worth a laugh.

Unfortunately, not all of the jokes work, and even worse, some of the best ones were given away in the trailers for this movie. Martin's 'street' appearance in the club at the end of the movie for instance, was shown so frequently in the previews, that any and all shock value was long gone from this joke.

I also find it quite humorous that Eric observes that all the white people in this movie are portrayed as uptight, and then instead of relaxing and laughing it off, has to complain about it. Am I the only one who see's that as an uptight reaction to a joke?

With a plot straight out of a sitcom, Bringing Down the House is only a so-so movie. As Patrick mentioned, its saving grace is its talented cast who manage to pull average material just slightly higher than it had a right to be raised.