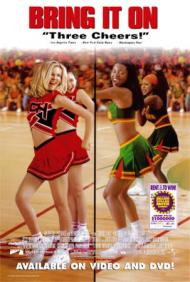 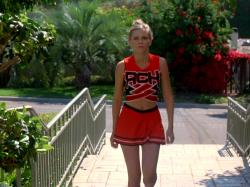 Kirsten Dunst in Bring it On.

Bring It On is a funny, feel-good look at the cutthroat world of top level, high school cheerleading competition. The young cast, led by the constantly perky Kirsten Dunst, does a fine job playing these overly ambitious, entirely shallow girls. Though the look and sound of this movie are both very of-the-moment, it is really just an old-fashioned Disney flick with a totally predictable ending, which somehow forces you to cheer along.

Remember in the late seventies and early eighties when mainstream teenage movies were filled with explicit and promiscuous sex coupled with rampant drug and alcohol abuse? Think of Animal House, Porky's and Fast Times at Ridgemont High. That was a reflection of the times; today we have the same thing only with a more sophisticated attitude. The sex in this movie is only implied but in a manner that takes it completely for granted. It's no big deal. We even, finally, have openly gay characters being treated as regular kids by everyone (except of course for the dumb jocks). Again all things which reflect the times. I think when a movie causes us to reflect on, or simply to recognize our times in a way which maybe was unclear before, then it has succeeded. In that sense, Bring It On is a truthful movie.

Dunst is Torrance, newly elected captain of her high-school cheerleading squad, which has won the national contest five straight years. She soon discovers that the routines that her squad had been using to win were all stolen from a Compton school where most of the students are minorities. That pretty much sums up the plot.

The routines themselves are peppy and gymnastically challenging. Still they begin to flow together by about the mid-way point. There are some funny moments and the pace moves along well enough. There are also many beautiful young people of both sexes to admire. Yes this movie has the obligatory locker room scene.

So, though this movie does successfully capture at least a slice of American youth circa 2000, it is only slightly above average for the genre. 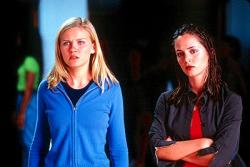 Kirsten Dunst and Eliza Dushku in Bring it On.

'Bring It On is a feel good look at the cutthroat world of top level, high school cheerleading competition.' Patrick is overstating it by quite a bit. Yeah, some high-schoolers compete in cheerleading but the most cutthroat it gets are harsh stares and some g-rated insults. A little more cutthroat might have made this movie a bit more entertaining.

This movie is Hollywood script 1b. Team has set back, team tries hard, team wins the big competition. Ok they come in second place, but the guy gets the girl and everyone is smiling. As Patrick wrote, not much really happens.

There is some humor. I liked the insulting choreographer. He has the one memorable line in the movie. He gets in the face of a cheerleader who just fell from a lift and says; 'I understand you have underwear up your ass right now but it beats a shattered skull.'

Kirsten Dunst is a good actress, but all she is required to do here is smile a lot and hit her mark. Other than learning a few basic routines, the difficult moves were filmed from a distance with a double, this was probably the easiest money she's ever made. 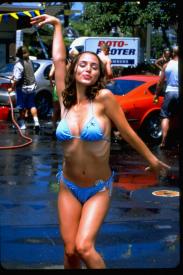 Eliza Dushku in Bring it On.

Ok, while I'll be the first to admit that watching beautiful women in short skirts jumping around isn't a bad way to spend an hour and a half of time, I couldn't bring myself to care enough about any of these characters to say that I enjoyed this movie. So a bunch of rich kids want to win a cheerleading contest? I'm supposed to care? That's the silliest, cotton candy plot I've ever seen.

Eric refers to the formulaic plot and he's correct to a certain extent. The team pulling together to overcome adversity, and learning a life lesson along the way, certainly isn't new. But when you look at a movie like The Bad News Bears for instance, there you had a ragtag bunch of underdogs who really had something to prove. The characters in this movie already have everything. They're America the Beautiful incarnate. What do they have to prove? Oh, like no one's ever copied a dance routine before!

However, any movie that gets Eliza Dushku into a bikini is worth watching at least once.