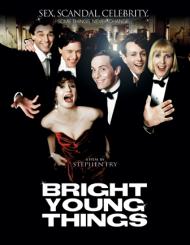 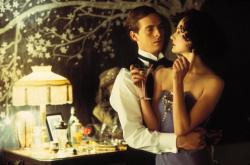 Bright Young Things is multi-talented Stephen Fry's directorial debut. An adaptation of the Evelyn Waugh novel 'Vile Bodies', it tells the story of a group of rich young British people just prior to World War II, who are the delight of the British tabloids. Think Paris Hilton and her crowd in the 1930s with a much wider vocabulary, and you'll have the sense of them.

At the center of the story are Adam (Moore), a would-be novelist, and his fiancée, Nina (Mortimer). Hoping to raise enough money to marry Nina, Adam has written a novel, but when it is confiscated at customs upon his return to England, Adam turns to newspaper publisher Lord Monomark (Aykroyd) for help.

After the suicide of the previous gossip columnist, Lord Monomark hires Adam to replace him, with the proviso that Adam uses his social connections to write about the latest goings on in high society. At first, Adam is reluctant, but he soon hits upon the idea of simply inventing the stories for his column.

Fry, a noted comedian, also wrote the script and it bears his signature trademark wit. It is in the humorous moments that the movie really hits its stride, with the supporting cast providing many of the laughs. Fenella Woolgar steals every scene she is in with her hilarious turn as Lady Agatha. And Peter O'Toole also gets in a few laughs during his few minutes of screen time.

It is in the drama that the movie suffers. I've always had difficulty feeling sympathy for the Bright Young Things of this world and I found it to be true here. There are a few moments of “Pity the poor rich people" that failed to resonate with me for the simple reason that the situations that they find themselves in are of their own making.

The movie ends the way the era of that time ended, with the start of World War II, which changes the lives of the BYT's as much as it changed everyone else's. It's a somber ending to such a period of brightness.

As a comedy, Bright Young Things has moments of brilliance that more than make up for any weaknesses. Fenella Woolgar's moment as the 'Spare Driver' is worth the price of admission all on its own. I just wish the drama could have succeeded as well as the jokes.

What exactly am I supposed to feel for these people? They are all very shallow, selfish bores. None have any original ideas or thoughts other than to have a party. They all fit the typical movie/television stereotype of rich people being lazy, stupid and unhappy.

Perhaps Fry is trying to make a comment on contemporary media whores like Paris Hilton. These bright young things from 100 years ago show that some young people of privilege, both then and now, are nothing but attention getting buffoons. None of them have anything relevant to say yet the media keeps writing about them as if they do.

Hollywood seems to enjoy picking on rich people and often show them as ignorant and miserable. Just think of poor, lonely Rose, from Titanic, being forced to marry a millionaire who loves her and wants to buy her expensive jewelry. What about poor Scarlett being too dumb to see that Rhett loves her and can provide her with anything. Why was the wife of a millionaire working as a secretary on Will and Grace? Why did Bob Newhart have an heiress working as a maid on his show?

Fry never seems to respect his own characters. They are all so terribly annoying that I wished them all a quick death. Bright Young Things tries to create Adam as a sympathetic character by forcing him into, gasp, a job. It did not work. Adam is as much a moron as the rest of his "friends." He is in love with an obvious gold digger who will marry the highest bidder. Agatha is mildly amusing. I liked when she sarcastically asked about whether the car was supposed to blow up.

What is the fascination with watching rich people fall on their faces? Does being wealthy automatically make you a bad person? The only time rich people do any good in movies is when it is an action/fantasy film like Batman or Lara Croft. Anytime a serious film is made with a rich character they are almost always miserable. Bright Young Things should have gone for more satire and avoided all of the dramatic cliches. 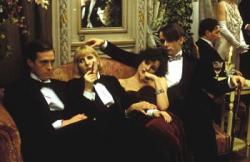 Fry seems to be making the point of how much of what we think of as modern social trends have actually been around for a long time. The novel it's based on was published in 1930 by one of the Bright Young Things of British society, Evelyn Waugh, who would become most famous for his 1945 novel Brideshead Revisited. Fry shows these elite members of society engaging in a hard partying lifestyle of rampant drug use and casual sex, with fashion and music playing a large part in the proceedings.

Eric, you wrote that Hollywood likes to portray the rich as miserable. That may be true but it bears no relevance to this movie, which was made in England by a British production company, directed and written by a Brit and based on a novel by another Englishman.

I agree with Scott that the movie works better as a comedy than a drama. The many supporting players bring the most humor to the movie. Stockard Channing as the fiery preacher woman is good and I really enjoyed Jim Broadbent as the drunk old major. The script keeps you guessing right up till the end over whether or not he's a con man or just an honest absentminded inebriate.

The script includes some well written speeches. My favorite is where James McAvoy gives his fake news story over the phone, “Never, never, never have such scenes been witnessed in high society, that uneasy alliance between Bright Young Things and old survivors. Perhaps this was the defining moment of our epoch of speed and syncopation. This so-called 20th century of angst, neurosis and panic. Reader be glad that you have nothing to do with this world. Its glamour is a delusion, its speed a snare, its music a scream of fear. Faster and faster they swirl, sickening themselves with every turn. The faster the ride, the greater the nausea, the terror, and the shame.”

Fry does seem to get his decades mixed up though. It takes place in the 1930s but ostensibly the music, fashion, cars and wild parties all seem more at home in the roaring 20s. The original novel was written in 1930, so this makes sense. At one point Emily Mortimer has a line about something being an acquired taste, “Like olives and talking pictures” that seems more like something a witty person would say in the late 1920s than the 1930s.

Overall though Bright Young Things is an intelligent and wry look at a society that is both of its time and timeless. Hair styles, music and fashion change but the debauched social activities of societies richest and most beautiful members do not.