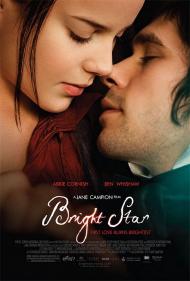 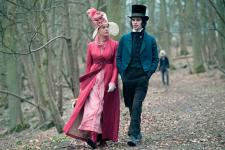 You could almost write an ode on that dress.

I suppose the proper name for this kind of movie is Costume Drama, but I've always thought of them as Masterpiece Theater because they remind me of an episode of that PBS mainstay. And after watching Bright Star I almost expected to see Alistair Cooke sitting by the fireside ready to sum it up after the credits.

The plot tells the story of the love affair between Fanny Brawne and the poet John Keats in England during the beginning of the 1800s. Keats is a struggling poet while Fanny is an upper class young woman who spends her time designing and sewing her own elaborate clothes. Their affair is quite chaste by today's standards, consisting of snatched kisses and passionate letters. The one thing to mar their love for each other is Keats' poor health which deteriorates as their affair progresses.

Playing the young lovers are two fairly unknown actors but both do a good job in their parts. Ben Whishaw looks the part of the young, pale and frail romantic poet. Equally good is Abbie Cornish as Fanny. In fact, Abbie is so good that really this is her movie. Together they share a repressed, English chemistry for each other.

Jane Campion directs the film with quiet skill. She doesn't add sex or give the characters out of place modern sensibilities. She also refrains from over the top drama and excess. This is a small film that remains low key throughout.

It is also a beautiful film. The costumes (for which it was Oscar nominated) are quite well done; particularly Fanny's dresses. The countryside and the scenery are also a treat for the eye.

The only conflict in the story comes from Keats' friend Mr. Brown who strongly opposes Keats' attraction to Fanny because time spent with her is time he doesn't spend writing (or with him). Keats' poverty also stands in the way of any long term relationship as does his health.

Like most Masterpiece Theater this isn't a movie everyone will enjoy. It's beautifully done and well acted, but slow and lyrical like a poem. There's no action and only small amounts of mild humor. But for those who do enjoy Masterpiece Theater, there's a lot to enjoy as this is a prime example of the genre.