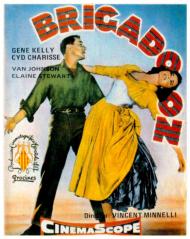 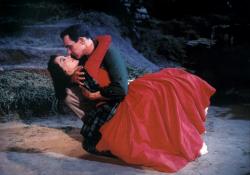 In the early 1950's Gene Kelly was the biggest star at MGM. He starred in An American in Paris in 1951. It won the Academy Award for Best Picture of the year. In 1952 he starred in the greatest musical of all time, Singin' in the Rain. In 1953 he flew to Scotland to scout locales for Brigadoon. Kelly wanted very much to film on location but the studio eventually settled on using elaborate sound stages that included running brooks and hills.

Brigadoon tells the story of two New Yorkers, Tommy and Jeff, who get lost hunting in the highlands of Scotland. They stumble upon the tiny village of Brigadoon. Brigadoon only appears for one day every hundred years. Tommy falls in love with a girl in the village, Fiona. The dilemma is that if he stays he will disappear with the town and if she leaves the spell put on the town will be broken.

Kelly gives a fine performance. He sings my favorite song of his, "Almost like Being in Love". It is very reminiscent of Singin' in the Rain. He dances around while singing about how great it is to be in love.

Van Johnson, who is not normally a musical star, takes a back seat to Kelly when it comes to dancing, but he makes up for it as the comedy sidekick. One Scottish lass, Meg, takes a fancy to him. She tells him, "I'm highly attracted to ya. Why, when I look at you I feel wee tadpoles jumping in ma spine." He responds, "That's about as repulsive an idea as I've heard in years." Later after Meg informs him that they should get married he asks her, "Can you think of one good reason why I, a strange man, should be interested in proposing to you, a mighty strange woman?" In another scene, a man from Brigadoon asks Tommy and Jeff if they have witches where they come from. Jeff responds, "Oh, we have 'em. We pronounce it differently."

Brigadoon should have been a great movie. It has great stars and wonderful dialogue. The problem lies in that this musical has so few memorable songs, "Almost like Being in Love" and "Heather on the Hill". The other problem is that it should have been filmed on location. As The Sound of Music would prove a decade later, a musical could be successfully filmed outside and real scenery can be a definite plus. 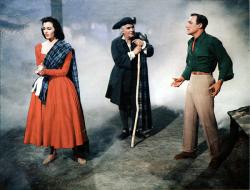 I rarely find myself in such disagreement with whomever it is that rates movies for TCM. They give this lackluster musical 3½ stars. I am more in harmony with Eric’s opinion. Brigadoon disappoints in nearly every way a musical can.

For starters I agree that it should have been filmed on location or at least outdoors on MGM’s famous backlot. Especially when you consider the fact that Brigadoon was shot in the then new format known as widescreen. The elaborate sets give the movie a highly stylized look but they also needlessly confine the story and the muted colors belie Vincente Minnelli’s famous eye for color.

The second problem with Brigadoon, and again I am parroting my brother, are the songs. They are too few and far between and - besides the two Eric mentioned - eminently forgettable. Gene Kelly, then at the height of his career, spends precious little screen time dancing. He has the one graceful, ballet number with Charisse and a snappy little jig or two but come on he’s Gene Kelly for god’s sake. Brigadoon has him singing more than he dances.

I agree that Van Johnson is good providing the comedy relief but his brief attempts at tripping the light fantastic are rather clumsy, especially when sharing the screen with Kelly. Cyd Charisse’s acting ability only serves to show just how accomplished she was as a dancer.

The whimsical storyline has potential and some of the dialogue is clever. Gene Kelly plays it too straight though. His Tommy is overly earnest and doesn’t seem to be having much fun. I never bought the romance between Tommy and Fiona either. It’s supposed to be an epic love affair for the ages but seems rather flat and contrived.

I suppose Brigadoon could have been a great movie. If it was shot on location, had a different score and featured more dancing from the two leads. As is though, it’s a misstep for all involved. 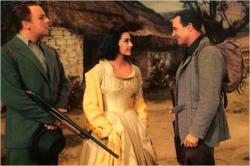 Okay, I know that this is supposed to be a romantic fairy tale with an idyllic Scottish village emerging out of the mist once every 100 years, but really the whole concept is one of the silliest things I've ever heard. The minister of the town wanted to protect the village from witches and this was the best idea he could come up with? Why not just pray that no witches be allowed within the borders of Brigadoon? Did every member of the village get to vote on this, or did he just arbitrarily make this prayer up on his own, with its obscure rules? And just how do the villagers know what the rules are since the minister so conveniently didn't include himself in this "blessing"?

When Tommy and Jeff first enter Brigadoon, they pass a little boy who looks like he might be about 10 years old. If that little boy lives to be just 50, roughly 1,500,000 years will have passed in the outside world. What if a nuclear war, asteroid or some other natural disaster destroys the planet in the meantime?  And aren't they eventually going to run out of people to marry who aren't related to each other? I know, I know. I'm completely over thinking all of this, but since there's not a lot to this movie, I had plenty of time to think about things like that.

Both of my brothers pointed out that this movie would have been better had it been filmed on location. Along with them, nearly every review or commentary written about it, mentions the same thing. But would it have actually improved it? It would have looked better certainly, but really that's the least of this movie's problems.

The real problem with this movie is the other thing both my brothers pointed out and that is the absence of good songs. Sure, "Almost Like Being in Love" is a classic, but I wasn't all that impressed with Kelly's version of it. He has a serviceable voice, but it's nothing special. The same goes with "Heather on the Hill". "Go Home with Bonnie Jean" is probably he catchiest number. Charisse is a good dancer (although her singing voice is dubbed) and she and Kelly share a few nice ballet moments, but they seem out of place in the highlands.

I also never really understood why Tommy was so eager to stay in Brigadoon. They should have provided more of a backstory. Maybe started the movie in New York City where we see him overworked and stressed, or maybe--given the time period--he could never have gotten over the war. Then we could better understand why he would long to live in such a quiet, peaceful little place.

Given the success of the Broadway show, I'm sure this story worked better on stage. Several songs were removed from the movie version, some because the lyrics were too risque, while because of Kelly and Charisse, several dance numbers were added. In any case, it had to be better than this version.