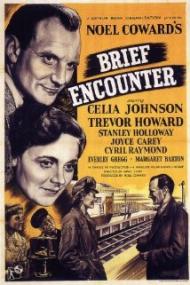 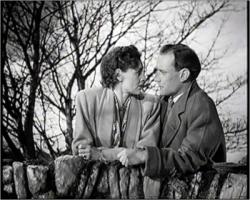 Brief Encounter is a classic British film from 1945. It was based on a one act play by Noel Coward, and directed by David Lean. It consistently pops up on lists of the best British films ever made and has enjoyed a wide and enduring legacy in popular culture. Celia Johnson and Trevor Howard play two middle-aged suburban types who, although married to other people, meet by chance at a train station and fall madly in love in late 1930s England.

They meet every Thursday but, alas, their relationship can never be. They part as suddenly as they met, taking with them only the memory of an all consuming love. Yes Brief Encounter is hopelessly old fashioned and romantic. It was shot in glorious black and white cinematography and features many scenes that have become staples in movie love stories. How many times have you seen any of the following scenes: a fog filled train station platform at night, a couple furtively seeking solace in the cinema, enjoying a rowboat on a picturesque lake, standing on a quaint bridge in the country?

This highly romantic setting is further enhanced by the inclusion of Rachmaninoff's Piano Concerto No. 2, as played by Eileen Joyce. It is heard throughout the film and serves as a theme for the short-lived romance between these two people who can never really be together.

The affair is told from Laura's perspective and she narrates her story in voice-over. We first see the couple as they are seated in a tea-room at a train station. They are interrupted by a chatterbox acquaintance of Laura's who is oblivious to the tender scene she has invaded. It soon becomes apparent that we are witnessing the end of something. The movie returns to this scene later on but now we see it from a slightly different angle and with an entirely new understanding.

The morality of the story is a bit tricky. Here is a case of two people cheating on their spouses and yet they are portrayed as sympathetic. They may never consummate the affair but it is cheating nonetheless. Although Laura and Alec are meant to represent each others one true love, their perfect soul mate, the secret to the movie's enduring success is the fact that their romance is fleeting. They both come to their senses after one disastrous evening reveals the outwardly sordid appearance of their relationship.

The performances by the two leads are brilliant. Though the movie focuses much more on Laura, and Brief Encounter definitely falls under the chick flick category. Celia Johnson was a well known stage actress who made the occasional film. She is wonderful in this role and was deservedly nominated for an Academy Award. This movie put Trevor Howard on the map. Stanley Holloway and Joyce Carey provide a few laughs in supporting roles, and Cyril Raymond is solid as Laura's husband (Alec's wife is never shown).

With a run time of less than 90 minutes, Brief Encounter lives up to its title. This tale of star crossed lovers is pure soap opera but when it is as beautifully crafted and acted as this movie is, soap opera becomes art. 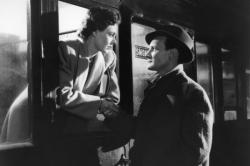 One of the things that makes this story so resonate with audiences is the normality of the couple involved. Celia Johnson was in her late 30s and while she was a fine looking woman, this is a very non-glamorous part and she looks every inch the dutiful British housewife. Trevor Howard was 5 years younger and while his looks have a certain appeal, they aren't matinee idol good looks. This is a story of a romance that could happen to anyone.

As Patrick wrote, there's a tricky balance to the story. The leading couple each have responsibilities to others in their married lives. Laura's husband is terribly nice, but a little boring. Alec's wife is described as delicate, which to me read as lacking in passion. And both are parents with the associated responsibilities having children brings. The two of them only share a handful of Thursdays together and that time is an escape for both of them. They can forget that they are a husband and a wife and a father and a mother with their whole life laid out in front of them in an inevitable sequence of events. During their time together they are free of duty and obligation and can be young again. Laura spends an evening's train ride home from one of their Thursdays daydreaming like a schoolgirl about the rich possibilities of what life with Alec would be like, but by the time her train arrives at her home station, the dream fades as she faces reality. The trick is to get audiences to remain on Laura's side even though she's cheating on her husband.

Although both Alec and Laura lament the brevity of their relationship, it's actually the briefness that makes it so powerful. Had it continued, it would only have ended tragically. Laura's reaction to the squalid nature of their one attempted sexual rendezvous is the signal to her that this can't go on. Divorce simply wasn't an option in a respectable middle class family of the time period. A mother and wife who divorced her husband would have faced society's contempt. A lasting relationship would have cheapened the romance of their situation.

I agree with Patrick's description of the story as a chick flick and as a soap opera, but he's also right when he describes it as art. This is soap opera done as tragedy, with flowery language and a sense of morality that is very dated. It would be easy to mock its earnestness, but it's also easy to be moved by it if watched in the right frame of mind.

Celia Johnson deservedly earned her Oscar nomination. She carries the movie. Howard's Alec is never as fully developed as Laura is. On the surface Laura is the prim and proper British housewife and Johnson maintains that facade, while at the same time revealing her inner feelings with her eyes. Although she narrates the story, many of her voice overs aren't needed. Johnson is able to convey the mood and her feelings so that we don't need to be told what she's feeling. Howard is good, but Johnson dominates the film.

Much of the film was shot at Carnforth train station at night. It was the filmmaker's original intention to shoot at a station in London, but the war was still going and blackout procedures prohibited it. Today the station remains a tourist attraction to fans of the film and the station even maintains a replica of the "Brief Encounter Refreshment room" where visitors can buy a cup of tea and cast repressed looks of longing at each other.

For those who like their romances tinged with sadness--and based on the number of movies adapted from books by Nicholas Sparks, there's plenty of people who do--this movie hits all the right buttons.