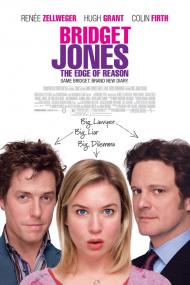 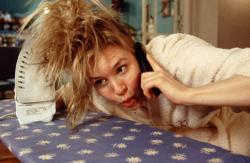 Renee Zellweger in Bridget Jones: The Edge of Reason.

When last we left Bridget Jones (Zellweger), she had finally found true love with Mark Darcy (Firth) and apparently her single days were gone for good. She was ready for new, bigger, and better things. Unfortunately, the creators of the sequel were not. Rather than build on the original, Bridget Jones: The Edge of Reason is just more of the same.

Unable to be happy in her new relationship, Bridget is soon feeling insecure about herself. Mark's new leggy intern seems to be constantly flirting with him and Bridget's friends soon have her convinced that he's having an affair. Before too long, of course, Bridget is single again. And when Bridget is sent on a television assignment to Thailand with Daniel Cleaver (Grant), who inexplicably has moved from publishing to travelogue narrator, she soon finds herself tempted back into a relationship with him. The result is that Bridget, as in the first movie, is caught between choosing between the bad boy and the good guy.

The strength of the Bridget Jones' movies lies in its characters. Bridget is every woman's insecure persona projected onscreen. Daniel is the bad boy, the man's man, ladies' man, man about town who simply oozes charm. And Mark is the stiff, stuffy, upper class Brit, whom you just know is always going to do the right thing. Those are the characters as created in the first film and they remain unchanged for the sequel, which is part of the problem with this movie. Too little has changed.

That's not to say that there aren't some funny moments in the movie. One of the best lines is at Mark's expense, when Daniel asks Bridget, "Tell me, is it true that during sex he says, 'Pardon me, but I'm about to cum.'?" Bridget is her usual hapless self, which I'm sure will resonate with some single women, although it seems that by now, after finding professional success as well as true love, that she should have matured slightly. And just how the filmmakers thought the scenes in the Thailand prison were funny, is quite beyond me. The movie's not zany enough for the scenes there to be taken as complete comedy and not played seriously enough for them to resonate emotionally.

The final analysis of Bridget Jones: The Edge of Reason is quite simple. If you enjoyed the original, you'll enjoy this one, only slightly less, since you'll be seeing most of it for the second time. If you didn't enjoy the first one, than you'll dislike this one even more. 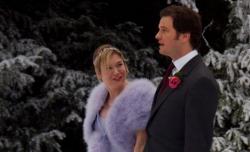 Renee Zellweger and Colin Firth in Bridget Jones: The Edge of Reason

Bridget Jones: The Edge of Reason was Zellweger’s first film after winning an Academy Award for Cold Mountain the previous year  Her career was on a roll most movie stars only dream of. When watching this, the first thing that came to mind was, “What ever happened to Renée Zellweger?” She stole everyone’s heart in Jerry Maguire (1996) and over the following ten years proved to be a versatile actress. Her last truly successful film was Cinderella Man in 2005. Her last actual film, My Own Love Song, was released in 2010 directly to DVD in the U.S.

As Bridget Jones, Zellweger found her signature role. As Scott noted, the first film ended with Bridget having found love with Mark Darcy. As this film starts, she is with Mark but he does not treat her in any way that supports the idea that he is in love with her. There is absolutely no chemistry between the two characters. They sleep together yet he seems completely bored with her company. They are opposites yet we are to believe that they somehow connect. I never bought them as a couple, I simply saw Mark as using Bridget for easy sex and she, being so desperate, taking whatever affection he may give.

I never really cared what became of Bridget or if she ever found love. Her adventures, such as skiing down a mountain to get a pregnancy test or being arrested for drug smuggling, are not as funny, or dramatic, as were intended. And what is with all of the Madonna songs. A couple of them are discussed during a formal dinner trivia contest and Bridget teaches the other inmates to perform "Like a Virgin." The scenes in prison drag on with Bridget listening to the other prisoners complain about their boyfriends. When Bridget finally leaves prison, the movie soundtrack plays “Material Girl.”

If Mark had showed as much passion for loving Bridget as he did in hating Daniel they would have never had any relationship problems. He demonstrates more emotion fighting Daniel in the fountain than he ever does with Bridget. For her part, Bridget needs to find better friends. They are as big a hindrance as they are any comfort. The writing is a bit forced. The resolution with Mark’s hot girlfriend is out of left field and fails to answer the question about why she is always at his home.

I get that, featuring an over weight girl desperate for love, this film appeals to lots of women. Although I too could lose some weight, I lack the ovaries to fully appreciate the awkward charm of a girl who constantly sabotages her own love life. She even screws up Mark’s proposal. All of this makes Bridget sympathetic enough but I never bought into her life and problems. If not for Zellweger's adorable smile, I would have cared little for Bridget Jones.

Although I was less than taken by this film, I was struck by Zellweger’s performance. She has always been willing to do anything necessary for a role. She gained weight for this part and gained muscle for Chicago (2002). In real life, it has been rumored that she made physical changes as well, through plastic surgery and Botox. I am not sure if that has played into her recent lack of screen appearances or not. Either way, I have missed her screen presence. She is an actress in the old school mode, bringing to life a variety of average characters and making them more likable than they often deserved to be.