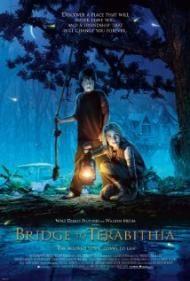 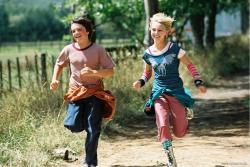 Josh Hutcherson and AnnaSophia Robb in Bridge to Terabithia

I had very little interest in seeing Bridge to Terabithia when it was released in theaters. The previews made it seem as if two children find a magical kingdom in some woods and have an adventure. The fantasy aspect of the film was heavily featured in the commercials. The actual film however, is far from what the trailer led us to believe.

Josh Hutcherson plays Jess Aarons, the middle child of five siblings. His family is poor and he shares a room with a younger sister. He has to wear his older sister’s hand-me-down shoes. On the school bus a bully throws a sandwich at him and yells, “Consider it a free lunch program farmer boy.” At home he witnesses his parents agonize over bills.

Jess escapes by drawing. He keeps a drawing pad with him at all times. Another light in his dark world is his music teacher, whom he has a secret crush on. She is played by the always adorable Zooey Deschanel, who is thankfully a brunette here.

Jess’s life changes greatly when a new girl, Leslie, moves in next door and is in his class. She compliments his art work and they quickly become friends. They wander into some local woods and find an abandoned tree fort. They refurbish it and make it their secret hideaway. Through their imagination they create a fantasy world that they name Terabithia. It has amazing creatures and monsters that the two imagine. Whereas in real life they get abused by a bully, in Terabithia they are always able to overcome any threat.

Together, Jess and Leslie deal with issues at school and at home. They discuss religion. "I seriously do not think God goes around damning people to hell. He's too busy running all this!" Mostly though, they provide each other with supportive encouragement. They are the very definition of best friends.

I related to Jess in ways that struck frighteningly close to home. I was the middle child of five. I loved to draw. I escaped into a fantasy world when I was a kid. I felt picked on and had a best friend that moved in nearby, that shared in my imagination. Our parents were poor. I wore hand-me-downs.

Perhaps my personal experiences influenced my opinion of this movie, but I found Bridge to Terabithia to be a very honest look at childhood. Jess and Leslie have issues that adults brush aside, but are all too real and threatening to them. They never become popular. They do not find a bunch of money. They simply find each other and learn lessons they never thought they would.

The movie ends with a harsh moment of reality that punctuates the need to be able to find your own happiness, no matter how hard it may be. The film drags a bit at the end but as a whole, Bridge to Terabithia is an honest look at childhood and how some deal with it. 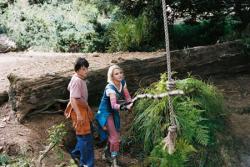 Josh Hutcherson and AnnaSophia Robb in Bridge to Terabithia.

As Eric said, the trailer and marketing campaign for this movie made it look like a children's fantasy adventure in the same vein as The Chronicles of Narnia films, when in fact it is really a coming-of-age story with fantasy elements thrown in. This is the second film adaptation of Katherine Paterson's 1977 Newbery Award-winning novel of the same name, following a 1985 PBS television version. Without giving too much away I want to point out that this novel has been frequently censored due to what some see as inappropriate content. In fact the American Library Association puts it at number 8 on its list of the Most Frequently Challenged Books of 1990-2000.

This movie is a fairly faithful adaptation of the book, although the ages of the main children were raised from 8 to 11. Its most controversial plot element was based on an actual incident that happened to a friend of Katherine Paterson's young son David. With his mother's permission David (now a playwright) co-wrote the adapted screenplay for this movie.

Jess and Leslie are two memorable characters. After a rough beginning when she beats him in a foot race, they quickly bond and soon become inseparable. She is quirky, intelligent and imaginative and doesn't give a hoot what anyone else thinks. Jess feeds off her confidence and blossoms. Together their imaginations run wild and Tarabithia is born.

Thankfully the use of CGI is kept to a relative minimum. It visually enhances their pretend world but without intruding on the story. The cast of young actors are all quite good with Josh Hutcherson standing out in a difficult role. Although set in rural Virginia it was actually shot on location in New Zealand and was the final movie by legendary cinematographer Michael Chapman. He had previously worked as director of photography on such classics as Taxi Driver and Raging Bull among many others.

Bridge to Tarabithia takes a realistic look at childhood innocence as it comes face to face with the harsh realities of life. It beautifully demonstrates both the fragility and the resilience of children and shows the true power of a child's imagination. In a way it is like the Chronicles of Narnia except this fantasy land exists only in the minds of these children as they scramble towards adulthood in an uncertain world. And that grounding in reality makes this a far superior movie.

Unlike my brothers, I watched this movie with no expectations at all. If I'd ever seen the trailer for it, I'd long since forgotten it. I'd also never read the book and so had no idea what to expect, beyond their descriptions of it. Even with their rave reviews however, I honestly wasn't expecting to enjoy it as much as I did. This is a very well made film that might be aimed at children, but can be enjoyed by anyone who ever was one.

As Patrick wrote, this is a realistic look at childhood. Eric pointed out that nothing overly dramatic happens except for the ending. This adds to the realism. This isn't about Jess or Leslie becoming heroes or something extraordinary. They're just two average kids trying to get through childhood with the help of a friend. The parents are also portrayed honestly. Jess's parents aren't wise and benevolent. They're tired and poor. His father is often brusque and abrasive. There are fantastical elements to the story, but those are the elements that take place inside the children's minds.

Both Hutcherson and Robb do a good job in the leads. And both have since moved on to bigger things. Robb is now playing the part of Carrie Bradshaw on the CW's The Carrie Diaries, while Hutcherson is one of the stars of the hugely successful Hunger Games franchise. In this film they manage to portray children who feel like children and not little adults who are wise beyond their years. This is helped greatly by the script.

Although the fashions and a brief mention at the beginning of the film about electronic devices peg this movie as being set in modern times, it has an old fashioned feel to it. The book was published in the 1970s and that's the time period it reminded me of. Maybe that's just because that was the decade when I was a kid and like Eric, and I'm sure Patrick, I was able to relate to these children's story because of my own childhood.

When I started watching this movie, I honestly didn't think that I would be misty-eyed by the end of it, but that's exactly how I found myself. When a story for which you had no expectations can do that to you, you know it's something special and Bridge to Terabithia is exactly that.